So these two episodes finally took Amber to the place where she had been thrown out decades ago, and her revengeful feelings had not let her rest since. Finally, she is at Sadiq and Anila’s household, after much chaos and upheaval created by her reckless decision of court marriage with Ahsan.

These episodes had a few bloopers and missed points which made it feel kind of dragging and kind of too much happening in a short space of time. Firstly, if Iqra had not been so discreet and clearly sent away Amber telling her that their mamoo and mami is there, might have ended in a better result than her symbolic and quiet warnings which were too late in any case. As usual, Shehzad and Fariha brought their orthodox thinking and old school fuss to the situation which did nothing to improve anything and at the end, the angry husband wife marched out of the house as usual.

Naheed’s reaction to Amber’s marriage was very natural. She is heartbroken since Amber was the apple of her eye. Her one daughter whom she loved more dearly than all others. Saima Noor was spot on in showing the feelings of a torn mother, who is desperately hurt by her daughter’s thoughtlessness, yet being a mother , her feelings are not in her control and cannot stop herself from remembering the youngest of her children.

Iqra’s reaction is very sane and sensible. She is trying her hardest pull her mother out of the abyss that Amber has thrown them into. Anum on the other hand is a whole different story. Even though this episode was about Amber’s selfishness, what stood out the most was Anum’s meanness. She is oblivious to her mother’s plight, rather she is going on and on about not marrying Dr Jawad like an broken record. Her behaviour and total oblivion to the pain of her mother and sisters make her look like Sadiq’s daughter far more than Amber does. I was totally annoyed at Anum today.

In Ahsan’s house, Anila’s reaction was all we could hope for. But Sadiq was disappointing today in the whole scenerio. His water truly is thicker than blood. He is totally indifferent and cold to Amber as if she is someone else’s daughter. I mean, I know he has disowned Naheed and his girls but I was still expecting something; a longing, a remorse or merely a tiny little soft corner.

Anila and Amber’s have come face to face and Anila has guessed her evil intentions very well since it takes one to know one. It is going to be a very interesting match but Anila is already putting herself on the wrong foot by going and complaining to Naheed. She knows she has no effect on Amber so she is going for a low blow by fighting with her mother.

Lets see what Anila has to say to Naheed and whether she will be able to hold her own infront of Amber. And also stay tuned to find out if Anum manages to control her feeling for Dr Jawad or they two eventually elope… 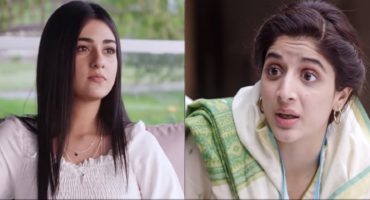