Mujhe Jeenay Du is turning out to be an interesting play which keeps you guessing. It also has enough tracks and variety of characters to keep the interest of the viewers alive. Some of the developments in tonight’s episode came as a complete surprise, I wasn’t expecting the story to take such a serious turn. Watching Naseeb blame Saira for Tipu’s Illness was heart-wrenching especially when you consider the fact that there are actually girls like Saira who go through all this on daily basis and have absolutely no one to turn to. Right from day one somehow all these men assumed that Saira could take care of Tipu and could look after her “husband” and his house. Naseeb could not handle his son and work himself but he expected Saira to juggle everything even though she is much younger than him and isn’t even an adult. He shifted his responsibilities to this little girl’s shoulders and now blaming her for Tipu’s illness was much more convenient than taking the responsibility himself. I was expecting Naseeb to feel bad about his decision to marry Saira after this incident but what he did was shocking considering the fact that he is a reasonable man otherwise. His actions however were in line with his character because he has always been very sensitive about Tipu. Once again Emaan Sher outdid herself in tonight’s episode, her expressions when Naseeb tried to strangle her were beyond brilliant. She is an exceptionally talented young girl and I would love to see her in more dramas. There are very few actors her age who can give such a solid performance. 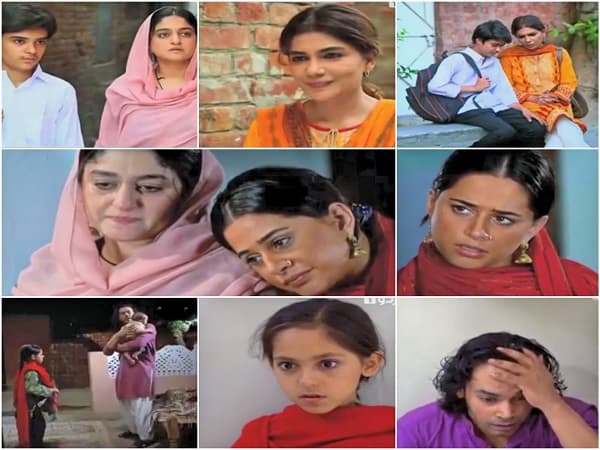 I have said this before and I feel the need to say it every time I watch a new episode of this drama – I absolutely love the fact that we are watching more and more dramas which show that women are capable of much more than plotting and planning or playing the victim. The scene between Yasmin and Saeeda was one which we don’t see in our dramas very often. Yasmin’s attitude wasn’t too cold or too friendly towards Saeeda which made this entire scene even more realistic. Saeeda’s apology and her character itself breaks so many stereotypes about second wives which we see in our dramas all the time. Our dramas are constantly promoting the age old dictum that a woman is another woman’s worst enemy therefore it is truly refreshing to watch plays every now and then which show that there are plenty of women out there who understand and support each other. Nadia Jamil and Iffat Omer both are phenomenal actors who breathe life into every role assigned to them therefore their perfect portrayals do not come as a surprise at all.

Shaheena is another woman in this play who makes you fall in love with her over and over again. Even though she has lived a really difficult life but every time she manages to finds a reason to go on with life with enthusiasm. Mehreen Raheal’s picture perfect portrayal marks a new beginning for her career since for the first time she has gone all out and proved her versatility. Malik sb once again bailed out another person who deserved to be punished because of his own ulterior motives. The writer in a tactful and subtle manner showed why he was going all out to help these people which made this entire development even more convincing.

The preview of the next episode was extremely enticing, I can’t wait to find out what happens next. Will Saira finally be free? It seems highly unlikely but it is impossible to predict what is going to happen next.

So far, Mujhe Jeenay Du has a very solid script which has been translated on screen faultlessly. All the actors involved have been giving impressive performances throughout and I highly recommend it to all those people who are not watching it.