Ohkay so, the writing of Zafar Mairaj, direction of Nadeem Siddique & the production of Everready Group of Companies; Munkir commenced on Tv One last night. The first episode introduced the characters in a very appropriate manner by giving out the details one needs to know to form an interest in the drama. I liked the first episode for the fact that things were kept simple & to the point which made it far more easier to get an insight into the characters. The way the conversations were carried out gave everything a very casual feel & it had a lot to do with the chemistry that all the actors shared with each other, which was good to see.

So, the story began with a dream where Runa (Nida Khan) finds herself getting married to her fiancé Zain ul Abideen (Osman Khalid Butt) in a church under the supervision of her hostel warden Sister Kathryn & just when the couple is about to exchange the rings, out of nowhere a stranger drags Runa out of the church & takes her away. The very next morning, Runa shares her dream with her stepmother Rania (Mahjabeen) but her point of concern isn’t about what happens at the end, rather she believes that just because she hasn’t seen Sister Kathryn in ages & just because she must be missing Runa, Runa needs to go & see her. 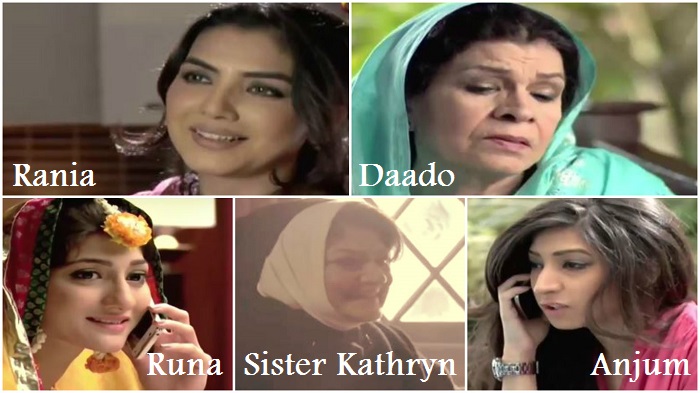 Runa is about to get married to Zain in just a few days but she finds herself restless because of the dream. Her wedding functions begin where her in laws come into the picture. Runa’s in laws reside in France & Zain has a mother (Naila Jaffry) & 2 sisters Batool Bano & Ghulam Sughra. Completely opposite to Runa’s family & their lifestyle, Zain’s family is quite conservative & they are shown to be practicing Muslims, which makes them a subject of ridicule for Runa’s best friend Anjum (Maryam Nafees). Anjum thinks Runa will have a very hard time adjusting in this family because they are staunch & conservative. Runa’s in laws are related to Rania & it is Rania who arranged the marriage of Runa & Zain. Even though this might be an arranged marriage for Runa but Zain on the other hand loves his fiancée. 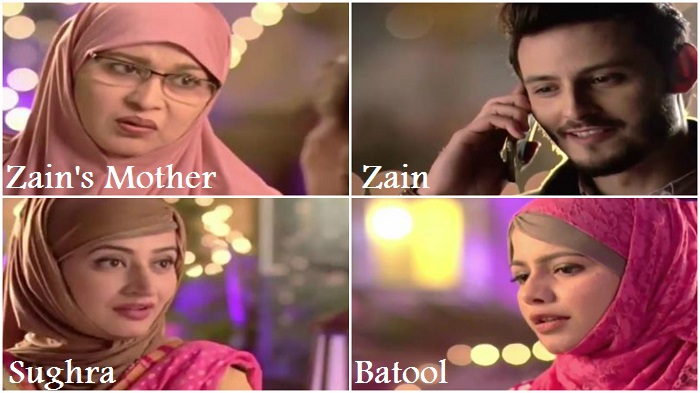 Runa is shown to be a very easy going but quite an emotional sort of a person who believes in giving each & every single relationship in her life a lot of importance & value, that is why, after seeing Sister Kathryn in her dream for the 2nd time, she insists that she needs to go to Murree to see her. Even though for Runa’s grandmother, the idea of sending a bride-to-be to a different city is daunting but Rania saves the day & tries to make her understand that when Runa had no one by her side & she was all alone in the hostel, it was Sister Kathryn who took care of her & looked after her like a mother. Runa shares a very strong bond with Sister Kathryn & this is something which her family understands & respects too. Finally, the grandmother gives in & allows her to go to Murree but instructs Anjum to go along Runa as well. The note at which the first episode ended showed a man in the company of someone who was preparing a suicide jacket, so I am sure we have a lot in store for us!

Overall, this episode was pretty decent & even though at the moment things might seem a little too simple, but the way they have been conveyed made it an interesting watch. The characters are pretty straight forward & simple. I must say, I loved the bond that both Runa & Rania shared. Rania’s character stood out the most for me because she was like an all rounder who was fulfilling each & every single duty of hers & was treating & every relationship of hers just the way it needed to be treated, she was like a friend, a daughter, a mother, a guide & a mentor; all at the same time. Rania might be a stepmother of Runa but more than that she is her friend, who understand Runa’s struggles & supports her, that is why she was seen telling her husband & Runa’s father that he should’ve been here on the occasion of Runa’s wedding because she needs him. I liked that the writer showed that a stepmother can be a friend too & the ladies in this sort of a relationship can share a very strong bond as well. Even though Anjum’s character was believable because mostly at the time of a friend’s wedding, very close friends do voice their opinions strongly against or in the favor of their friend’s in laws but everything that Anjum said about Zain’s family with that judgmental undertone was borderline annoying & impudent, to an extent that I was being put off with her presence in the drama. Anyways, the direction seemed pretty good & the production values were decent too. The acting of all the actors was quite nice & I am definitely convinced to tune to Munkir next week. Please share your thoughts about the very first episode of Munkir.