This episode opened with Chaudhry Fazal Din refusing to accept Sammi as his vani. His decision to take a stand even though Chaudhry Rab Nawaz tried his best to convince him to go ahead with the nikkah by giving him lectures on ghairat, was completely in line with his character but watching Rab Nawaz accept Sammi as Vani for his son instead of shooting her brother did not quite fit in. Also, it did make me wonder if Rab Nawaz was going to let Fazal get away with this? Surely someone like him who believed in forcing people into submitting to his will would use more than just words to have his way and if things still didn’t go according to his plans one would expect him to make an example out of the person who refused to listen to him. Rehan Sheikh is an exceptional actor who makes every scene count but this latest twist in the story came out of nowhere. So far the focus of the story is more on those people who are forcing their decisions on Sammi and how these decisions are shaping up the course of Sammi’s life. It would have been so much better if the viewers were introduced to Sammi’s character in detail in the first 2 episodes or so before starting the actual story. There was one scene in this episode in particular which showed how deeply the mindset that a girl should sacrifice everything to save her male relative’s life was engraved in Sammi’s mind. She begged Chaudhry to spare her brother’s life and was willing to do anything at all in return. This scene was short but impactful.

This episode had a lot of scenes which showed the selfishness of those people who were making these life altering decisions for Sammi. Watching Sammi’s brother worrying about the bruises on his face more than his sister was one such scene which said a great deal. Haris Waheed’s confident acting and his overall look makes me wish that we saw more of him before he killed his friend. Now he has a limited role to play in the story or so it seems. Sammi’s mother cursed her for not being able to save her brother’s life and her father who is responsible for all this just does not care! 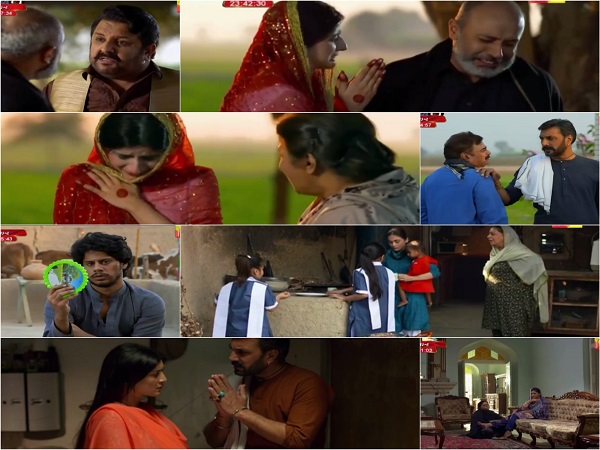 Rashid is another person who is looking out for his own interests and he is another mard who claims to love his wife but he puts his own needs and desires first. Nadia Afghan’s character was introduced in tonight’s episode and she too appeared to be more “refined” than one would have expected her to be. Apart from Rab Nawaz’s wife, all the other women in this play worship their men and would gladly do anything for them.

Rab Nawaz’s definition of ghairat and the status of men and women was another interesting aspect of tonight’s episode. Rab Nawaz is ignorant but he is so sure that there is nothing wrong with his beliefs. His wife however does not want her house or child to be affected by whatever her husband believes in. She wants to educate her son and does not agree with her husband but she also knows that there is very little that she can do about the situation openly therefore she turned to Rashid for help. This development will change the course of the story completely. Watching Rashid’s daughters defending their mother was one of the best scenes of this episode.

So far, the good thing about this drama is that it has introduced the viewers to a world which is real for a lot of unfortunate people but completely alien to many of us who sit in front of the television screens and watch these stories unfold and it has managed to do so without getting too dull and depressing. Although all the tracks in the drama are serious and they highlight the status of women in such villages in some way or the other but even then the approach is simple therefore Sammi so far isn’t a very heavy duty drama.