I have to admit that the last scene of this episode made me forget every other development in this episode and I had to watch this episode again so that I could write the review! What a cliffhanger this ending was and I hope that this time around this last scene turns out to be exactly how the viewers would want to see it unfold otherwise it will be a major disappointment. Right now, I am thinking how will I be able to wait another week to find out what Zubeida actually heard especially after watching the preview of the next episode. When Arman was shouting and saying all those things, I was wondering how come no one ever hears them talking and then Zubeida was standing right there – best ending ever to ensure that all of us wait for the next episode impatiently.

Mohsin Abbas Haider and Kubra Khan stole the show yet again with their faultless performances and the amazing chemistry which makes all their scenes special. Their performances and chemistry are the reasons why they should have been given more screen time together in every episode. Arman’s dialogues about Pareesa entering his life like a khudkhush bambar and the way Pareesa tried to make him understand that she did not plan all this was the best part of this episode. Although as a whole there were some filler scenes in this episode as well but few conversations which were intense and performances which were truly mind blowing made this episode an interesting watch. This time around it was easier for me to connect to Arman’s character and I simply love how Pareesa has been shown as such a strong individual. Although Pareesa is shattered from inside but even then she always found a reason to continue loving people. She distanced herself from her parents because she blamed them more than anyone else for what happened to her but she still chose to love and protect Nadia and her flowers. Now too when she found out what a wonderful person Arman was and how much he loved her, she loved him back and is now being shown fighting for their relationship. I must say that there was a time when I felt for Arman way more than I did for Pareesa because I saw him as collateral damage but now Pareesa is definitely being put through a lot more. Mohsin Abbas Haider’s expressions were brilliant when Pareesa was walking out; Arman clearly did not want this, he was torn apart but he also could not let Pareesa go. 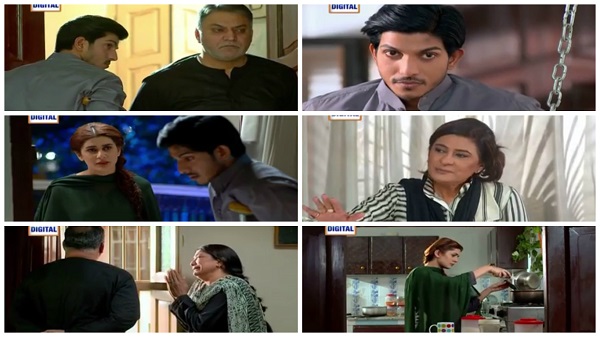 Apart from Arman and Pareesa’s scenes together, Zubeida’s conversation with Pareesa in the kitchen was another one which seemed to be going nowhere until Pareesa asked Zubeida if she practiced what she was preaching. Pareesa’s statement could be the reason why Zubeida got inquisitive and decided to find out what exactly was the problem between Arman and Pareesa. I can’t wait for Shehnaz to find out the truth especially after watching her showing so much support not only for Arman but also for Mahmood. She blamed Pareesa for her “attitude” and appreciated Mahmood and his family for putting up with her!

The only issue I have with the developments so far is that Mahmood cannot sense the hatred and disgust Arman feels for him even though it is quite apparent from the way he looks at him. Pareesa’s expressions in the preview of the next episode suggested something completely different! The next episode can be the game changer, let’s see. Muqabil is back on track and I can’t wait to find out what happens next.