Ohkay so, this episode of Muqaddar revealed some new aspects about most of the characters. Driven by selfishness, greed & dejection, how they tried to overcome all of it was quite interesting to watch. Whatever Muqaddar has offered till date is not something new but the way everything is being revealed and taken forward makes it worthwhile. However like it happens with all the typical stories, the pace should be steady & repetition is a no no, therefore they should move things forward before everything starts to seem monotonous.

Raima decided she had to put a closure to the relationship & feelings Haris & she had for one another. She knew this was the only way Haris will ever agree to move on, therefore she tried to hurt him where it hurt the most, by telling him that he was never good enough for her & the moment she found someone who was, she decided to get married. Haris’ reaction obviously was a result of his anger, but knowing Raima & been with her for his entire life, he should’ve known that whatever Raima was saying was clouded by an ulterior motive, otherwise she was never that kind of a person. In fury & agitation, Haris decided to cut all ties with her & even forced his parents to do the same, which means he will even get married to Maha now but later in life when he will analyze everything, he will realize that Raima was not wrong & in fact she herself was a victim to an influential man’s trap.

Abeera is being irrational, she has just met Hassan & she thinks he is the one. It is obvious that she doesn’t see herself compatible with Saad & he is not the kind of person she wants to be with, that’s fine but Hassan himself has not made any promises yet but Abeera is trying to make this relationship official. Abeera’s character is nice but she is someone who wants what she wants & will never settle for anything that she doesn’t have her heart into. Saad I feel should also be honest, he has loved Raima will all his heart but only for the sake of his family’s honor, he is persistent in being committed to Abeera. Yes, as a concerned cousin he should feel protective of her but when it comes to staying committed to her, he should let her go because she is not interested in him.

Farkhanda has been trying to take charge of the situation, she even contacted Hassan but she knows she can not do much because it’s Abeera she is dealing with. It was finally revealed that Saad happens to be the son of a househelp who used to work for their family when their grandfather was alive. This is where the humility & niceness in Saad comes from. It is obvious that Farkhanda’s entire family has looked down upon him but because she has raised him, she vouches for him, which is actually nice! 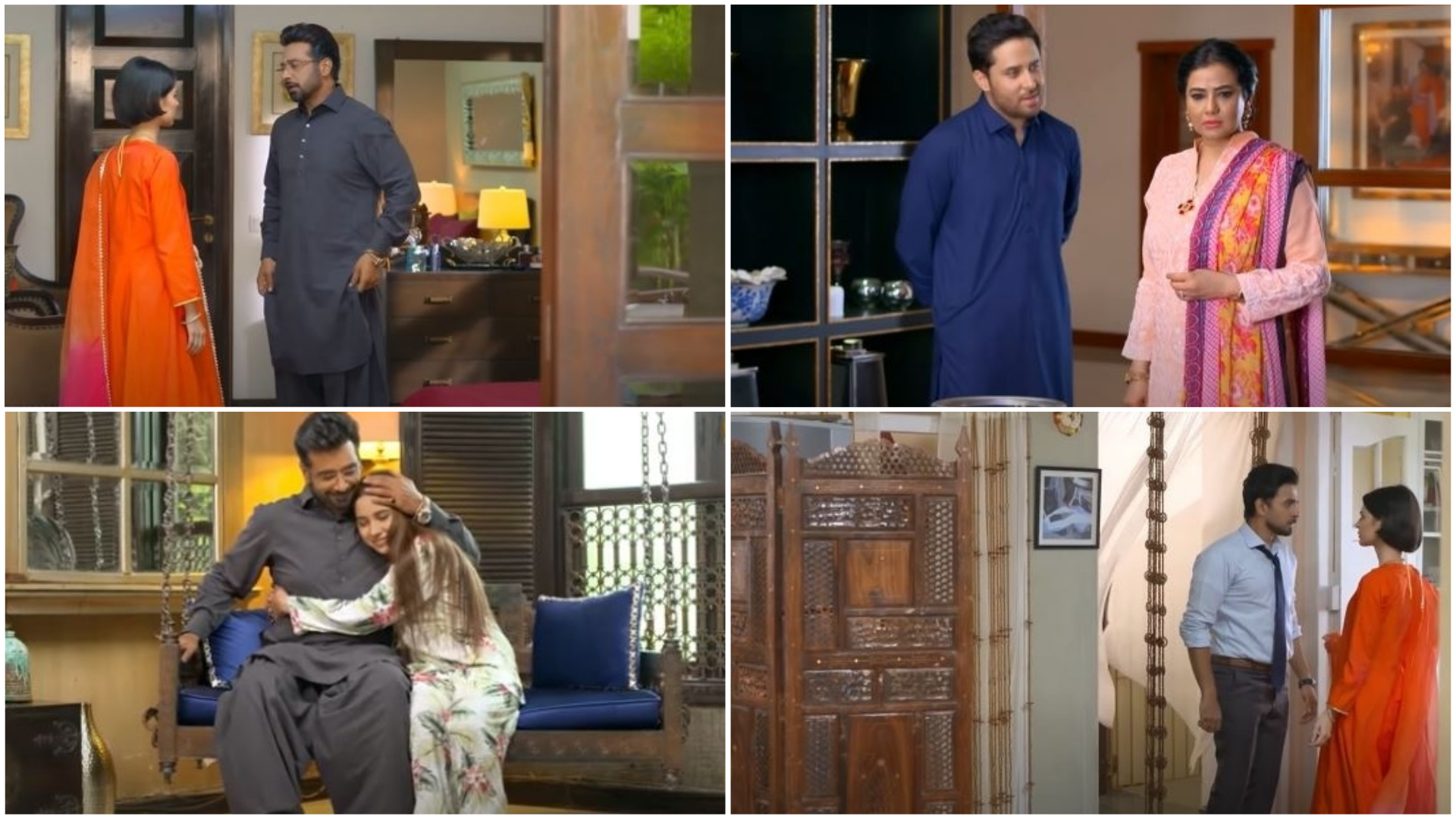 The most interesting & in fact amusing scene of this episode was Haris & Farkhanda’s interaction. Farkhanda is someone who doesn’t believe in giving away what she is going through & she doesn’t let the emotions get the better of her – this is one aspect about her character that I actually really liked because so far I believed she didn’t have much going for her but it was nice to see that her character is layered & has quite a few shades. In fact, more than the main lead Saif ur Rehman, I find her character multi-faceted.

The way she embarrassed Haris was definitely what no one saw coming. All that Farkhanda heard from him was news for her too but she decided to own her husband’s decision at that moment & decided she shouldn’t do or say anything that will allow Haris to feel he succeeded in what he was trying to achieve. Haris himself didn’t expect that reaction from Saif ur Rehman’s first wife & this is probably what will eventually help him finally come to terms with the fact that Raima is a part of Saif ur Rehman’s life & family, therefore she doesn’t stand a chance. Farkhanda’s decision of containing herself & not getting rattled showed that all these years, she had learnt to subdue her emotions & for her entire life, she had done everything she could to be a supportive wife to Saif ur Rehman. It is not like she is oblivious to his activities & short-lived flings, but till now, she had this satisfaction that she was the only wife but now with Raima in the picture, it is yet to be seen what she will do. She is definitely the kind of character that has it in her to surprise & do the unexpected.

This episode of Muqaddar was a good watch. The story is progressing slowly but I am interested to see the development in the track of main characters. So far they have had similar sorts of interactions & the only difference was Raima was trying to be nice to get the edge to at least meet her family. Her uncle & aunt are nice but they yet again are disappointed after hearing all that Haris had said to them about Raima. It won’t surprise me if they too will cut ties with Raima because of their dear son. Arshad should tell Haris that he tried to negotiate with Saif ur Rehman but he was not ready to let go of her. At times it feels Haris’ parents want Raima to be the bad cop so that their son can be safe & do what they expect him to do. His mother won’t have a hard time allowing Haris to harbor negative feelings for Raima because she will then see this as an opportunity to get him married to Maham. Also, when Haris went to Saif ur Rehman’s place, he could’ve easily seen Saad’s pictures because they were right there, to know or at least connect the dots that Saad was related to Saif ur Rehman but didn’t know much about his doings, maybe later he will find about it & do the same thing, let’s see. Please share your thoughts about this episode of Muqaddar.