Exhausted – that is how I feel when I see Noor and Saleem together now. I actually feel bad for both of them for they are sooo different and while we have all heard of opposites attracting (something I never thought made sense but oh well) – here, attraction ka ‘a’ bhi nahin raha if it was ever there at all! The news of Noor’s pregnancy did not bring Saleem closer to Noor as she had hoped. These two episodes were a better watch especially since there was no Gulshan in the second one but even though there were Noor-Saleem scenes, sadly they were not heart -warming ones. 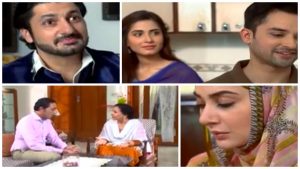 Saleem finds himself lapping up the attention Gulshan showers on him. He has fallen hook, line but probably not sinker for we do not see him having romantic conversations as such or entertaining thoughts of marriage, etc just yet. That gives me a small ray of hope that this whole scenario might be nipped in the bud but only time – or a further few episodes will tell! I do not want to dislike Saleem and when I say I feel bad for him too I do not mean to give him a free pass for being mean and insulting to Noor for nobody has the right to hurt another’s feelings. But for so long he has been given free rein in the house and being the sort of personality he has become, I can see how Noor’s constant attempts at correcting him may get under his skin. The reminders to brush his teeth, take his shoes off, wash his hands, while are seemingly only good things but trying to drill them into a grown man, her husband on top of that and someone who is not particularly smitten by her – can not be the best step forward. Saleem, on the other hand, does not care anymore what Noor or her family may think of him and I cringed at the dinner table scene where he would take the wrong meaning out of every statement Noor made. Anyways, yes Saleem is glaringly much more at fault here and it takes two to tango so if Noor can make the effort to try to make the marriage work, Saleem should try to.

The ‘kasam’ scene definitely left a bad taste in my mouth especially an insight into Saleem’s mind later. Which is what made me think how very different his way of thinking is and how poles apart their approach to life is. Their journey towards marital harmony is a really long road and that too not even guaranteed to meet at the same point. Noor has finally made it to the doctor and with even the doctor telling him off, I wonder whether it may have a positive effect on Saleem or send him off again to Gulshan, Nihari, Pulao & Co! 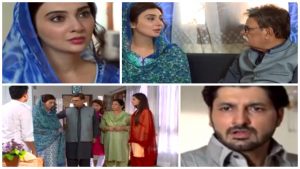 That was Noor and Saleem. Love is in the air except the air that these two breathe, it seems. So, Waseem and Zeb are growing fond of each other and have their families’ blessings. Noor sees a savior in Jalal in the form of a potential match for Sofia’s sister in law which would help save her own sister’s marriage. Not that that seems threatened for Adnan is clearly against the idea of a second marriage.

Now that news of Noor’s pregnancy is spreading, Gulshan’s mother will push her to go after Saleem with all guns blazing and it remains to be seen who comes out of this scarred and who does not. Given that this was the 22nd episode, I really hope things start moving along now and at this point I do not see how this can have a happy ending? To have a happy ending, Saleem needs to have a complete turnaround and to rush one in a couple of episodes does not make sense either. I was hoping to see a few good episodes of Noor and Saleem growing close and understanding each other but somehow I do not see that happening anytime soon. The charm of this dram is beginning to wear off and even Syed Jibran’s amazing acting is not managing to save it. The only thing I am curious about now is not how Saleem may or may not change, if Noor will find out about Gulshan, will Saleem marry Gulshan – nope, I am just wondering after pulao and nihari, what’s next in store for Saleem upon his next visit to Gulshan’s! What did you all think of these episodes? Would love to hear your thoughts!