Tonight’s episode of Sabaat yet again suggested that this drama is not going to deal with mental illness seriously like many other Pakistani dramas we have watched in the past. My expectations while watching Sabaat are completely different now. In the beginning, I was expecting it to be more meaningful and well-put-together but now it is pretty clear that Sabaat is another mediocre drama with a star cast. The production values are impressive and Sarah Khan has definitely put in a lot of effort to look and act differently this time around but the character she is playing does not have enough to offer. Miraal/Dr.Haris track is more likely to be a love story since they are not just meeting in cafes but also talking on the phone after working hours! Anaya and Hasan’s relationship is gradually turning out to be the better aspect of this drama although Hasan’s idea of inviting their friends at the office was such a bad one! Anaya’s relationship with her parents remains the best part of this drama but I honestly think that the writer needed to put in more life and substance into Miraal’s character. Miraal could have been a complex and grey character but so far she comes across as a brat who needs to get a life, nothing more and nothing less!!

All the scenes covering Anaya and Hasan’s track were realistic. The conversation with Anaya’s parents and the sweet romance in the office made their scenes likable. Some of the conversations were stretched and could have been chopped down. It is however strange that Hasan continues to ignore the fact that Anaya and Miraal simply cannot work in the same office especially considering the fact that Miraal is her boss. The writer has already established the fact that Anaya cannot work anywhere else since the last time Hasan tried to work elsewhere, there was great opposition. Anaya for now is putting up with everything in order to keep the ‘peace’. Sadly, Anaya too in a way is turning out to be one of those people who simply let Miraal get away with everything. Hasan thought it was alright to invite their friends to the office without informing ‘the boss’, that was like asking for trouble! Even when Hasan suggested it, I was hoping that Anaya will tell him that this was not a good idea but she went along with the idea. This confrontation was definitely not needed and could have been easily avoided! 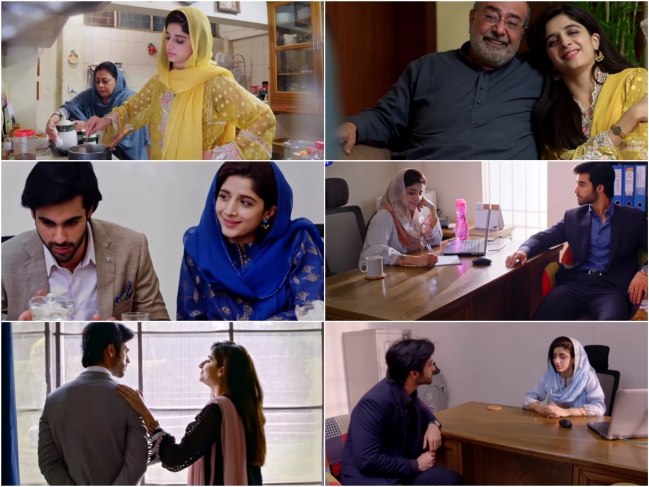 It was good to see Anaya sharing her problems with her father and it would have been even better if they got the chance to talk about it. Hasan’s mother also sensed that Miraal might be the reason behind Anaya’s sudden absence. For now, Hasan and Anaya are being ‘nice’ because they do not want to cause more problems for Hasan’s mother. I hope that things change in that department since both these characters have strong personalities and they are educated, they can easily move out of the house and stay in touch with Hasan’s parents. People live independently after getting married, there is nothing unusual about it therefore this whole issue now seems more forced than ever. Hasan and Anaya can live a simple life peacefully free from all the unwanted insults and trouble since they are definitely not dependent on materialistic things for happiness.

There was only one scene in this episode that covered Dr.Haris’ attempt to make Miraal understand what she needed to do in order to change her thinking and attitude. Miraal did not pay much heed to his advice in fact her dialogue ‘aap meri counseling kar rahe hei ya mujhe depressed kar rahe hei’ was funny! She is so used to hearing what she wants to hear that these polite reality checks make her ‘depressed’!! So basically, Miraal wants Dr.Haris to make her happy – essentially do what everyone else has been doing for years, which is fundamentally the root cause of her mental disorder. Miraal’s scenes tonight clearly suggested that she is also falling for her doctor. She doesn’t want to listen to him and is still quite focused on ‘eliminating’ Anaya but she enjoys talking to Dr.Haris! Showing gradual change in Miraal’s attitude would have made this track more meaningful otherwise Haris could have been Miraal’s love-interest only, why introduce him as the therapist? 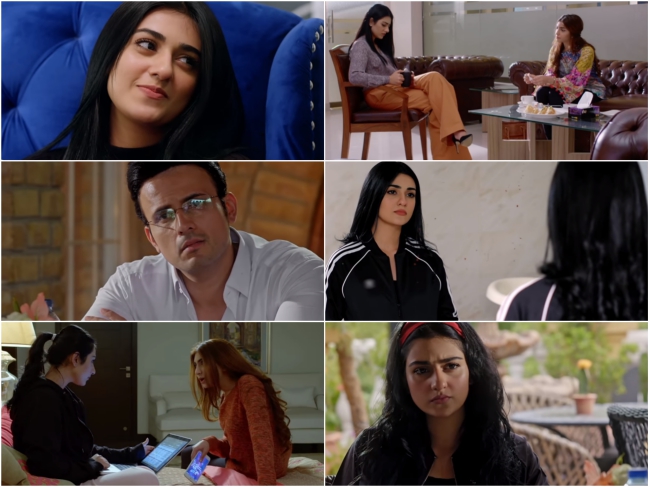 Haris’ creepy friend continued to play the role he played in the previous episode. It is truly upsetting watching such a big production house normalizing such behavior. Surely, these scenes are not adding much to the story but give the wrong impression about the profession. Yes! This must happen but why show it so casually like there is nothing wrong with it.

Miraal is no longer seeing ‘naani’ therefore I am assuming that Haris has been able to make Miraal feel less insecure but then is that a good thing? Doesn’t Miraal need to understand that she will eventually be left alone if she doesn’t change her ways? This track is seriously confusing! Any guy Miraal would have fallen for could have made her realize the things, Haris is trying to make her realize. He hasn’t done anything yet which a businessman or an engineer couldn’t do – if you know what I mean!! More than once in this episode, Miraal blamed Hasan’s shadi for making her mentally upset! So basically these 3 sessions with Dr. Haris have not changed her thinking at all.

Tonight’s episode of Sabaat had some likable scenes, Anaya/Hasan and Anaya’s family’s scenes are always refreshing. The progress in Miraal’s track wasn’t too impressive. Hopefully, a huge loss in business will turn out to be an eye-opener for Miraal! As I said, I don’t have high expectations from this drama anymore. Mawra Hocane and Ameer Gilani look cute together, hopefully, they will move out of this house and start a new life! This drama definitely needs to pick up pace and a change is much-needed.

Can someone please tell me why this employee wanted the day off? His dialogue delivery wasn’t audible. I think I know what he said but not too sure! 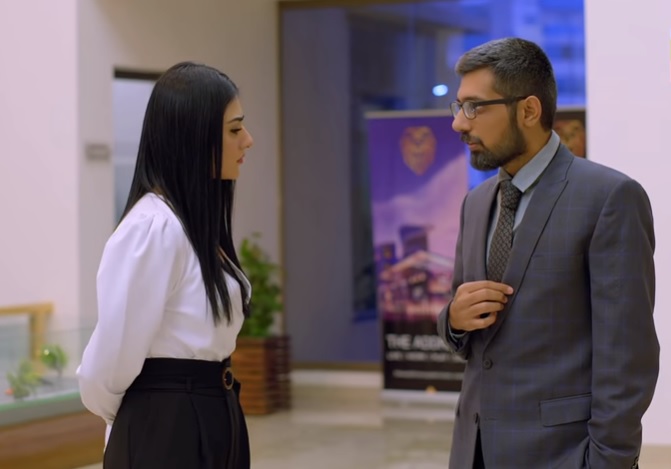