Tonight’s episode of Sabaat was relatively engaging but Miraal continues to be the most shallow and uninteresting character in the drama. This entire track is pointless and repetitive. Ali’s character is back in the picture and I had a difficult time figuring out why he wanted to get married to Miraal now. Anaya, her mother, and Hassan’s mother are the only meaningful characters at the moment. Some of the decisions made by Anaya however were not too wise. Why did she even expect that at a time when companies were downsizing, she was going to get such a long leave? She can easily ‘hide’ her pregnancy for a few more months. Anaya’s attitude towards her job has been quite casual, had she quit this job and looked for another one, it would have made more sense. Harris’ scenes are so badly written that there are times when I actually feel for Usman Mukhtar! This episode was however really well directed and the camera work in some of the scenes was superb.

Tonight’s episode of Sabaat opened with Hassan feeling really emotional while he looked at his picture with Anaya. Even though he is convinced that Anaya indeed was having an affair, he did not allow Atif to share his opinion on the subject. This scene suggested that Hassan might be re-thinking his decision and doubting it but the conversation he had with his mother made it quite clear that he was convinced that Anaya indeed did cheat on him. Ameer Gillani acted brilliantly tonight; he made sure that Hassan’s confusion and his emotions were translated flawlessly on screen. Right now, Hassan is not even thinking about what his mother has been saying to him. His mother’s dialogues were written beautifully and it is definitely refreshing watching a sane person giving her opinion on the subject even though she knows that she won’t be heard. 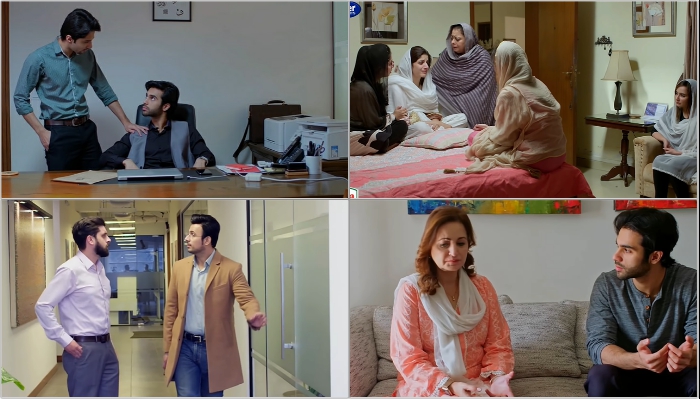 Anaya’s friends are back in the picture and as far as I can recall one of her friends did meet her parents in the hospital and the doctor they were visiting happened to be her relative. Yet, all of them acted as if they knew nothing about the situation. There are many unnecessary secrets in this drama and like many of the typical Pakistani dramas; Sabaat also relies heavily on misunderstandings and miscommunication. Anaya has decided that she is not going to tell Hassan about their baby. In order to keep her pregnancy a secret, she wanted a 6-month leave from the office, something that confused me further about the timeline. This would mean that Anaya has not been going to the office for over a month yet somehow she has not been fired. Although she has great potential and her boss is a gentleman, no one gives such favors especially when the company is going through a crisis. All of us witnessed in the past few episodes how desperately Hassan looked for a job and the crisis in the construction industry was used as an ‘excuse’. Yet, somehow the same is not applicable for Anaya. Hassan was also a bright student who graduated from the same university as Anaya yet their situations in this particular aspect have been unbelievably different.

Anaya and Hassan’s scenes with their mothers were the best scenes from tonight’s episode. Mawra Hocane and Seemi Raheal’s performance in this particular scene was outstanding. Both of them made this scene so relatable. Both of them have had their vulnerable moments and there have also been moments when they were each other’s strength. I would give the writer credit for penning down these scenes realistically and the actors definitely breathed life in them.

Hassan’s mother is sure that Anaya is not lying but she has no idea that all of this is Miraal’s doing. Instead of convincing Hassan that Anaya was innocent, she tried to convince him to ‘forgive’ her. This was another well written and executed scene. Laila Zuberi’s character is finally coming into its own.

Miraal’s track continued to be the most unconvincing and uninteresting part of this episode. Ali’s return and the explanation made no sense whatsoever. Why did he email the friend and not message Miraal? And now that he was back after a year why didn’t he get in touch with Miraal? If he really was waiting for Miraal to ‘get better’ and hadn’t moved on then why were they ‘reunited’ in a chance meeting? This entire development was just plain ridiculous! All this time we were thinking that Ali was wise enough to walk out and away from Miraal when he saw the red flags but apparently he is still smitten by her and would like to marry her once she takes a divorce!! He said he couldn’t live without Miraal and that he would die without her yet he never tried to get in touch with her. Not to mention the fact that these two were once engaged and surely they would have mutual acquaintances yet Ali had no idea that Miraal was now married. 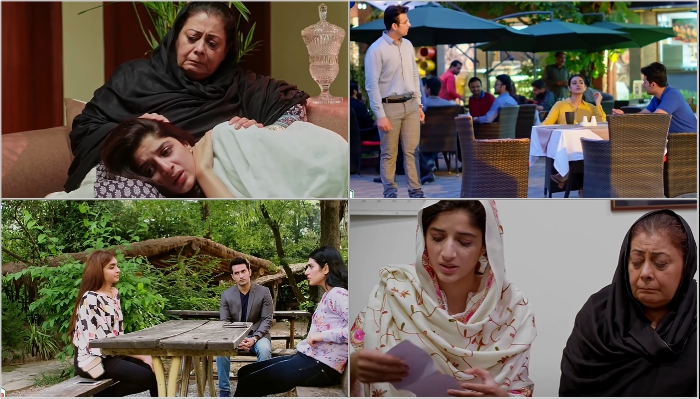 The way Harris confronted Miraal when he saw her dining with Ali equally immature! Watching all these educated grown-ups acting like teenagers is not the least bit ‘entertaining’. The fact that we don’t get to see or hear Miraal’s inner turmoil or thoughts makes this entire track meaningless. We know by now that she is incapable of loving someone and all she wants is control but there was a part of her that was disturbed. How did she find peace? And if she found it when she fell in love with Harris then why is she not disturbed now after finding out that he lied to her. Miraal’s character had the potential to be interesting had the writer delved deeper into her thought process. She is negative and controlling; there is nothing more to her character.

Sabaat’s script continues to be weak and it seems like the story is not going to be wrapped up anytime soon. Will all the tracks have a sudden and abrupt ending since there has been hardly any character development? All the characters in Sabaat had the potential to be more interesting had these tracks been covered in a different manner. This drama leaves you with more questions than anything else. Only a few relatively sane characters keep it from getting too dull. The production values and the picture quality is great but that does not make up for the lack of quality content.