Like every other Pakistani drama that is on air nowadays, Sangat too has reached the point where it should be wrapped up in 2 or 3 episodes but we have been watching one filler episode after the other for the past few weeks. The only good thing about tonight’s episode was what Ayesha said to Adnan about Sangat not being an illegitimate child. I must say that what Adnan is going through right now could have been shown in a much better way if these outbursts did not include statements that are highly unpleasant to hear. Adnan loves Sangat and wishes she was his child. The way he treated Sangat when he was under the effect of alcohol clearly showed that he felt helpless and angry. He wanted this child to be his and cannot accept the fact that she isn’t his. He cannot take out his anger anywhere else therefore Ayesha is the one who has to face this entire situation alone. Adnan has kept the secret to himself which could mean that he will accept Sangat with all the history at some point.

Farah never has anything new to say. What she says is right but because it is being said over and over again in every episode therefore she sounds like a broken record. Ayesha’s mother’s concern and her lectures have never been appealing but lately they have been intolerable! There was a time when I thought that Sangat was a “drop everything and watch it” kind of a play but things have changed completely now. I feel the need to keep myself occupied with something else while I watch the show because otherwise it is almost impossible to sit through it. 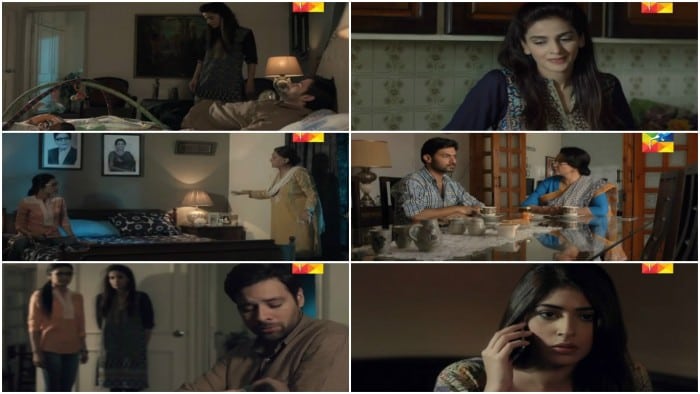 Every single track has been given the screen time it needed, all the motives and character traits are well established therefore it is time to move the story forward. First we got to hear aunty Zubeida weigh the pros and cons of a nikkah in a Masjid and then the maulvi gave a long lecture about Salma’s dignity – not to mention the fact that while he did that the way he referred to her many times was not respectful at all. Nothing tangible came out of all these unnecessary scenes, well at least not in this episode. There was a lot of talking in this episode but not much came out of it. We have been listening to Shahwez wanting to do exactly what Ayesha wants him to do for the past so many episodes but no matter what he does to get away from crazy aunty Zubeida, he ends up with her!

This episode was a complete snooze-fest, the only two people who got the screen time needed to cover what was happening in their lives were Adnan and Ayesha. Other than that every other track needs to be wrapped up ASAP. I have fallen in and out of love with Farah’s character already because of the excessive screen time she gets and I have completely lost interest in Mr. clueless (Shahwez) and Miss. Desperate (Salma – of course!) Everyone who meets Shahwez falls in love with him – whether it is Salma, Adnan or Zubeida, enough of this fatal attraction – can we please move on!!

Do you think that Sangat is being stretched and we are watching one filler episode after the other? Do share your thoughts in the comments section.