Tonight’s episode of Shadi Mubarak Ho was a lot like the previous episode; slow-paced and light but not exactly funny! If this drama was more fast-paced and some of the scenes in particular were shorter, it could have been far more entertaining, even though the storyline is a little too simple. Unfortunately, this drama also doesn’t have enough characters or tracks to keep the viewers interested. Even the few characters which get plenty of screen time in every episode aren’t exactly the sort of characters you warm up to and look forward to watching every week. Ikhtiyar gets more screen time in every episode than Ahsan. Ikhtiyar’s relationship with the people in the house is somewhat interesting but he gets way more screen time than he should. Ahsan and Nyle also do not have the kind of bromance which could have made this relationship come alive on screen. Nyle and Zoya’s relationship is plain and realistic but not exactly appealing. The most off-putting aspect of this drama so far has to be the repeated references to certain diseases which do not even pass as a joke!

Many of the conversations in this episode revolved around Rimsha and it seems like the writer is trying extra hard to build up the curiosity of the viewers therefore I hope that Rimsha’s character will live up to the “hype”. It would have been so much better if her character was introduced in this episode. Nyle has fallen for Zoya and even though Zoya likes him as well but she has been shown as a practical girl who does not want to admit to herself or others that she is falling in love with Nyle. Right now I find Nyle’s father’s character the most likeable one in the play. Yasir Hussain did really well in the first episode because he is definitely good at mimicking and can make you laugh but too bad he decided to play the “hero” instead of a more comic character. 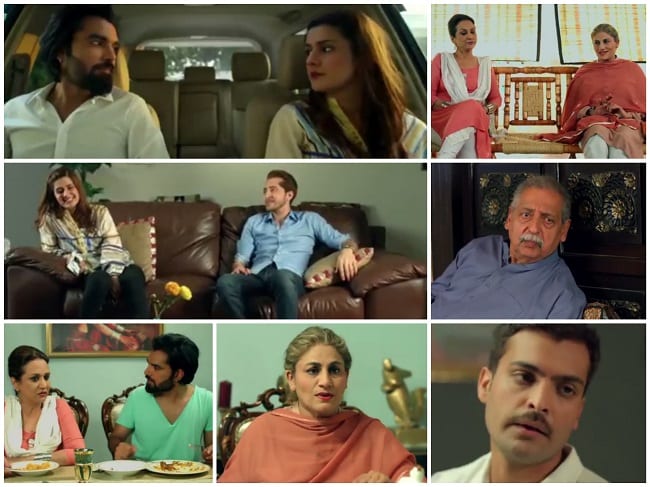 The preview of the next episode suggested that there will be some kind of a misunderstanding between the “love birds”! I am wondering if Rimsha will make her entry in the next episode or not and whether the story will pick up pace in the upcoming episodes. The first episode of the drama was interesting because it was longer than usual therefore it covered more too. Every episode so far has a specific pattern and there is nothing unpredictable or interesting about the plot. This drama could have been far better if the script was written in such a way that the viewers could have easily connected to the characters. If this was not meant to be an all out comedy then the writer should have added more emotions in the drama to make it relatively more attractive for the viewers. I would love to see Kubra Khan in particular doing some serious comedy for a change. Also, it is sad that even someone like Bushra Ansari does not make you laugh when you are watching this play because the character she is playing does not have a lot to offer.

The OST of Shadi Mubarak Ho is the best thing about it so far. I expected a lot from this drama but it has turned out to be a huge disappointment so far. I will give it two more weeks, if it doesn’t take off then I am not tuning into it again.