Another week, another intense and convincing episode of Shayyad which ended a little too quickly! Shayyad is turning out to be an interesting play which keeps you engaged and even though some of the cast members are clearly not the best people for the job yet it manages to hold your interest. Shayyad is the perfect drama to watch if you want to be thoroughly entertained. It has a different and unpredictable storyline and the execution is on point for the most part with the exception of the loud background score which can be overbearing and drowns out the dialogues sometimes. The pace of this show also gives it a definite edge since so far every episode has contributed something substantial to the story. Saad’s character and his track continues to be the main attraction since it isn’t very often that we see a young man’s journey translated in such a manner on screen in our dramas. The fact that the misunderstanding in this episode wasn’t stretched and in fact took the story forward deserves special mention since many of the dramas nowadays bank heavily on misunderstandings alone! It is always good watching a play which doesn’t have those run-of-the-mill scenarios.

Like every other episode of Shayyad this one too had quite a few important developments to its credit. Saad’s desperation piqued after Hani made it clear that this was the last time he was going to express his love for her in this manner. Saad’s disappointment to see dada alive said a great deal about how desperate he was. I am however glad that he had nothing to do with Salar’s accident because planning something extreme makes him human but going ahead and executing these plans would have turned him into a negative character. Even when Saad is saying those negative things and plotting the unspeakable, he comes across as desperate and immature and never as a negative person. This is the reason why even though his character isn’t perfect, it is always likeable. Saad and Hani’s confrontation in Hani’s room was intense but a little too loud. While Saad’s tone was alright, Hani was literally shouting. The scene covering Hani and Saad’s first meeting in this episode was beautifully written and directed. The additional poetry in the background is a remarkable way of showing Saad’s state of mind and adds to the intensity of these scenes. 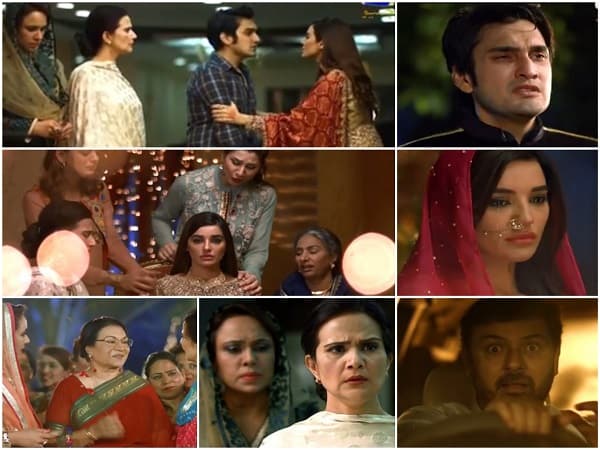 The wedding festivities and everyone’s frame of mind during them was covered impressively. This episode also showed how Salar felt about his deceased father which makes his track even more intriguing. He definitely has a background story and a specific reason for being so controlling, selfish and cold. Hani’s outburst in the hospital and the reason behind it was the best part of this episode. Now everyone knows what is going on between Saad and Hani, I am waiting to see how Mahpara reacts to this latest development.

The preview of the next episode was interesting but it revealed a little too much since after this episode the viewers would be wondering whether Salar survived or not and if this marriage will eventually take place. Saad has more time on his hands now but it is highly unlikely that he will be able to convince his parents or Hani. Apart from some scenes in which the background score could have been toned down, rest of the episode was brilliantly directed. The script so far is logical as well as enticing. Uzair Jaswal continues to impress as Saad, Nauman Ijaz has nailed Salar’s character and majority of the supporting cast has been giving solid performances. Sadia Khan’s acting was slightly better in this episode.

How many of you watched tonight’s episode of Shayyad? Don’t forget to share your thoughts about it.