Suno Chanda is delightful, entertaining and gripping Ramazan special show. The overall concept of the show is somewhat like Aangan but unlike Aangan, it doesn’t have any underlying messages so far and is pure entertainment. Also, unlike Aangan, all the characters are not equally appealing but the main protagonists Jiya and Arsal are the main attraction of the show. Their track and relationship gives this comedy serial a definite edge. Iqra Aziz and Farhan Saeed’s on-screen chemistry and their performances are the highlight of every episode. The witty and humorous script makes it a must-watch. Apart from the unnecessary thappars which seem completely out of place and are in bad taste, everything else about this show is picture perfect. The fact that Arsal and Jiya get a lot of screen time in every episode also makes the show more interesting. The pace of this drama is perfect and even though it airs daily, it still entertains. Jiya and Arsal’s nok/jhok and relationship has been penned down and executed brilliantly.

Suno Chanda is the story of a joint family – 2 brothers, their wives and children and their sister and brother in law who are very involved in everything which happens in the house. Jiya and Arsal were forced into a nikkah by their grandfather before he passed away and now even though they are poles apart and cannot stand each other, they are going to get formally married really soon. The pace of these first 5 episodes couldn’t have been better. These episodes focused entirely on highlighting the reasons why Jiya and Arsal cannot stand each other and how desperately they are constantly trying to ensure that this marriage doesn’t take place. Some of the situations aren’t always convincing but then this isn’t the kind of show that should be over analyzed. 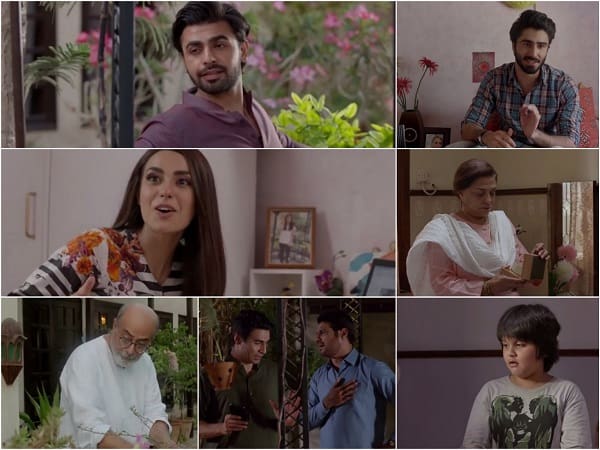 Bi Jaan (Samina Ahmed) is the head of this household and Agha Ji (Syed Muhammad Ahmed) is her dead husband’s brother and also someone she was romantically involved with beofre getting married. Samina Ahmed and Muhammad Ahmed both are remarkable actors and it is a delight watching them performing these roles. There are plenty of situations in the drama in which the comic element takes the lead even when there is a history and emotions attached to a certain situation. Right now Agha Ji’s son seems like the perfect match for Jiya and Kinza could be the ideal partner for Arsal but it is also highly likely that at some point Arsal and Jiya’s feelings for each other will completely change. Arsal and Jiya are constantly shown plotting and planning to get each other in trouble basically to make sure that they don’t get married. Some of these plans are funny, others are just plain cruel and few of them totally backfire. Arsal’s latest adventure was one such plan which backfired. The recent episode turned the story around because for the first time Arsal might have a reason to feel guilty although right now he is wrongfully blaming Jiya for whatever happened. DJ’s character is hilarious, the child star Sami playing the role has nailed his character. He is a natural, who always enjoys and does justice to every role assigned to him, I am very impressed by his acting.

Suno Chanda is a nice break from all those comic drama serials which rely heavily on cheap comedy. It is witty, hilarious, involving and definitely a must watch!