Like every other episode of Tau Dil Ka Kya Hua, this one too was a visual treat right from the get-go. Although the situations in this drama are completely bizarre at the moment and it is almost as if all these characters are letting their ego get the best of them but even then the treatment given to this drama is so brilliant that you enjoy watching every single scene and can’t help but look forward to finding out what exactly is going on in everyone’s mind. Khalil-ur-Rehman’s writing style is such that he keeps the viewers wondering about the actual feelings of the characters and he makes it really difficult for the viewers to guess whether a character is taking revenge or he or she actually is in love. The fact that it didn’t take Faris a lot of time to “get over” Dariya as he started pursuing Zoya immediately after she left, went to show that indeed Dariya really did know Faris better than anyone else. Dariya’s character has always been my favorite and the reasons she gave for not staying for longer made me like her character even more. Dariya did not want to wait for the day when Faris would fall in love with her because she knew that such a day will never come therefore even Siraj uncle’s “threats” did not work when he tried to stop her. Now that Dariya is out of the picture, it seems like Faris wants Zoya to share his emotional burden with him.

Since Zoya’s parents told her why Maya disliked her so much therefore it could be another reason why all of a sudden Zoya is actually considering this proposal. This had to be the most bizarre situation I have ever seen in a Pakistani drama yet it has been translated on screen so well that it intrigues you more than it creeps you out (for obvious reasons). The credit for this goes entirely to the director and all the actors involved. This script could have been a complete disaster in the hands of a director who didn’t understand it so well. Everything has been written so boldly that it needed to be underplayed on screen otherwise it would have appeared to be over-dramatic and annoying. 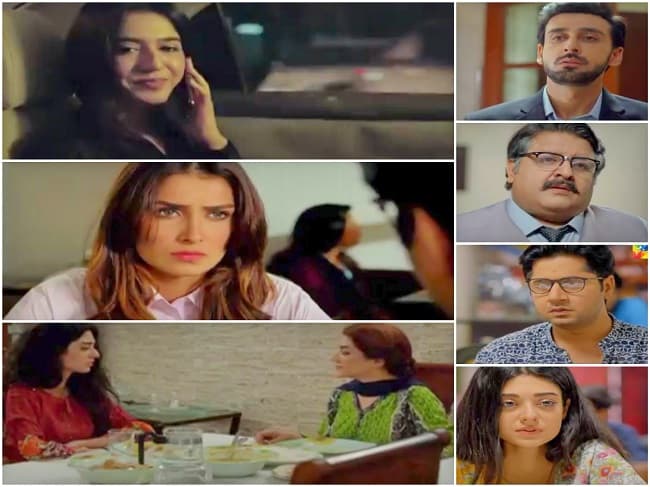 The turn Tipu’s character took had to be the most shocking of all developments in tonight’s episode. The manner in which Tipu and Maya’s meeting was covered was absolutely faultless. Imran Ashraf and Ayeza Khan’s impressive performances coupled with those witty dialogues made this one of the best scenes of this episode. Maya clearly looks down upon Tipu, she thinks he is beneath her – her expressions said it all – yet she was willing to strike this deal with him. I am wondering how a woman like her who has such a big ego can do so much to go back to Faris. I feel that the main motivation right now isn’t just love but also the fact that Faris and Zoya might get married if she doesn’t take an extreme step to pave way for another nikkah.

Sami Khan’s performance in this play has been faultless throughout, he looks great, has acted brilliantly and has made Faris’ character likeable even though the character itself doesn’t always have a lot going for him! Rehan Sheikh is another actor who always does complete justice to every role he plays. Saif was completely missing from this episode and I must say that I didn’t miss him one bit! In fact this episode was one of the best episodes of Tau Dil Ka Kya Hua because the focus was entirely on Faris, Zoya and Maya.

Shahid Shafat definitely deserves an award for making this difficult script come to life on screen in such a way that you are forced to give each episode your undivided attention. Beautiful visuals, phenomenal performances, powerful dialogues, impressive makeovers and creative direction make this drama an artistic piece of work! Loved watching this drama for 15 weeks and looking forward to how the story unfolds from here on.