There was plenty of focus on Elma’s ‘maid status’ in the house in this episode. Sharafat Begum’s unstoppable rants and her failure to see her daughter-in-law as a living and breathing person who has another family too is getting annoying with every passing episode. Zarbab’s ‘attempts’ to take a stand for his wife continued to fall on deaf ears and he also showed those sides of his personality which went to show that even with all his niceness he is after all a part of this household in which there is no concept of caring for each other beyond a certain limit. Arif’s selfish and thankless attitude was also highlighted in this episode. Javeria’s re-entry in the house was shown in a brief scene but it went to show that she will be making an appearance every now and then to influence Zarbab. The change in Muzzafar Hassan was the only positive development in this episode but Ramish has decided to marry Sunbal even though he made it clear that he feels nothing for her. Sunbal’s attitude yet again was disappointing and somewhat confusing. In the last episode she said that Ramish’s mother had made it clear that he was in love with Sunbal but in this episode it seemed like she knew that was not the case. Unfortunately, this marriage is bound to take place or so it seems at this point.

Elma yet again was unable to make it to an important family function, this time it was more important than anything else she has missed so far. The fact that these situations have been shown so many times in the previous episodes as well did not make me feel for Elma’s character this time around too. She knows her mother-in-law well enough to know now that she will not allow her to leave the house for so many days therefore expecting something like this was wishful thinking on her part. Sharafat begum has conveniently stopped doing any housework at all therefore if Elma is sick or not at home then no one gets fed!!! A very typical situation indeed and probably something which is faced by every other married woman but definitely nothing new or enticing. Elma continues to be Allah mian ki gaye! Elma used to take care of everyone in her house too therefore this status is not new for her. The only big difference is that she used to do all this housework out of love before and she received love in return but now she does not get any appreciation for the work she does – like I said absolutely nothing new about this situation. Just like all the previous episodes it seemed odd that Elma could not even answer her sister’s call, call her back or message her to tell her she could not make it to the function. Instead, just like always an imagined conversation with Ramish was the only way for her to ‘vent out’!! 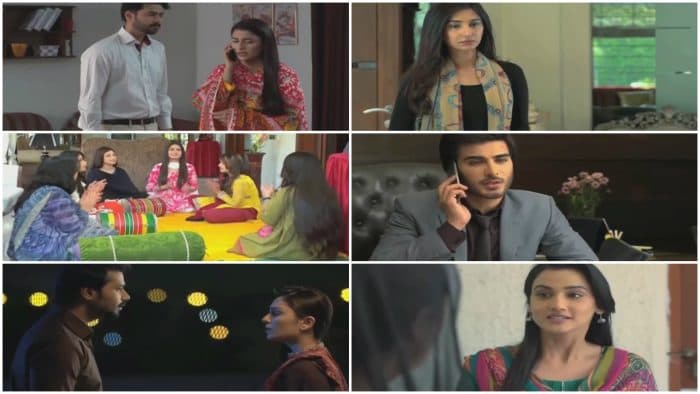 Zarbab’s behaviour towards Elma after Javeria left went to show what kind of a person he was. He likes Elma, cares about her but for him it was really important that his wife looked pretty and dressed up in front of his ex-girlfriend. At the same time when Elma fainted, he was genuinely worried for her. Zarbab’s character is nicely etched-out, he is not all black. He can be nice but he wasn’t raised in a way that he can care for other people beyond a certain point! The fact that there are different shades to this person’s personality make him better character than other zalim husbands we see in other dramas. Ali Abbas has impressed me with his acting right from the first episode. His dialogue delivery is very impressive and his acting is always effortless.

Ramish’s decision to get married to Sunbal was more like surrendering than anything else although even then it wasn’t a very convincing development in the story and I am still hoping that this marriage will not take place. Arif’s new job at Ramish’s office will only create further problems for Elma. The preview of the next episode however showed an entirely different scenario which has done-to-death written all over it but hopefully Zarbab will not start doubting his wife right away. He might however find out details about Ramish and Elma’s background story from other sources. What makes this certain track different is that Elma and Ramish never really had a relationship as such; all their conversations and meetings were not real, they were all imagined therefore the only truth here is that Ramish proposed to Elma and she refused the proposal. Arif might however twist the truth to make things complicated for Elma since he is jealous of her. Elma’s sister’s track got a lot more screen time tonight than it deserved. Ramish and Elma’s father’s relationship is heart warming; it is always good to see these two characters interacting with each other even when the context is not always cheerful.

This episode laid down the foundations for what is coming ahead and it was a relatively slow episode. The direction was top-notch as usual and just like every other episode there was plenty of repetition in some tracks, zero development in the characters except for Muzzafar Hassan and tons of clichés. Even with all these weaknesses Tum Kon Piya continues to give you something to look forward to, it can pass as a guilty pleasure which so far does not have any glaring flaws in the story. The writer has played it safe and the drama is directed well too.