I was glad to see on ARY’s facebook page that this is the second last episode of the drama. Surprising as it is that it has managed to hold our interest past the 25 episode mark, it definitely is time for it to wrap up before the viewers begin to feel it is dragging. Today’s episode showed the characters’ lives move forward and not entirely how I may have predicted.

If Novera spent even half as much time working on her own marriage than she did worrying and trying to poke her nose into Zainy’s marriage, she could have possibly made things work for herself and Sherry. Her smiling face when she offers to take Zainy shopping sent alarm bells ringing in my head and true to form, she did not disappoint as we learn she rang Ahmer to come and take Zainy home. Zainy is pregnant and Novera takes it upon herself to inform Ahmer. ‘Shauhar tailormade nahin miltay. Mera shauhar tumharay leeyay utra tha, lekin mila mujhay’. How interesting. True, Zainy herself did not wish to be with Sherry but if Novera realized he really was not meant to be hers, then why ‘sawaar’ herself on Sherry’s head?! 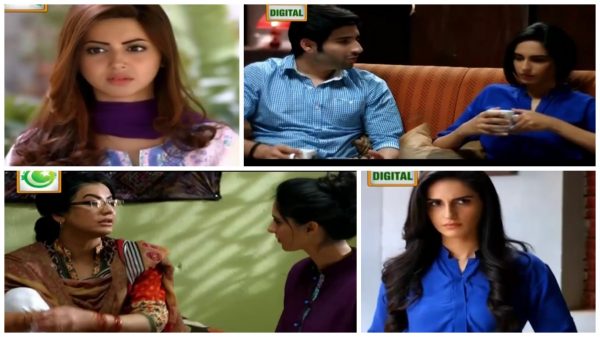 I am not sure if Sherry knew Novera rang Ahmer or had asked her to ring him but he was definitely on Team Novera when he spoke to Yusuf later about how the right thing for Zainy to do is to go back to Ahmer. Yusuf has always been very encouraging to the extent of being borderline pushy when it comes to Zainy’s education but I do not think he was wrong to say that they could have waited a few days and let Zainy give her exams. But then later, when Zainy says to Ahmer that giving CSS is her father’s dream, he was not entirely off the mark when he said she had not come to his house to fulfil her father’s dreams. While I find he is wrong to forbid her to meet her father, I do think Zainy’s stance about her exams, education and career is a bit off since these were things she had not discussed and come to a mutual agreement with Ahmer about before marriage and yes, we may say women have the right to do with that they want even if they are married but my personal opinion and the way our society is, makes me think that for Zainy to be so firm about giving these exams and the way she argues with Ahmer rather than rationally discussing it with him, when it was not something they had both mutually agreed on before is a bit out of line. Especially when she justifies it as something that her father wanted to do – the very father she yelled at and gave no respect to in front of Ahmer. But then Ahmer reacts to her attitude by going out of control and that just makes things worse. Anyhow, what Ahmer also said to her about how she could be a bit calm when he is angry and vice versa makes sense but probably not for these two for they are like two peas in a pod as far as maturity, anger and sense is concerned.

With Novera riling Ahmer up, he emotionally blackmails her into telling Yusuf she will not be meeting him again. His reply to her was very sweet and emotional. It was probably what she needed to hear and we see Zainy moving on with her life with Ahmer. We see a different side to Ahmer now where he thinks nothing of using his wife’s beauty to his advantage like when he tries to convince her to act in the Ruby Soap commercial. ‘ Meray dil ki awaz Ruby Soap’ what a tagline, LOL! No wonder Zainy said no, although the reasons she cited were obviously different! Aslam Sleazeball/Sb tells Zainy that Ahmer has committed on her behalf to act in his upcoming serial and has also taken an advance off him. He sends Ahmer away on the pretence of checking out a location for a shoot and while Ahmer later swears he did not know of Aslam’s intentions, I am still unclear about the advance. Did he commit and take the advance or was that also a fabrication on Aslam’s part? 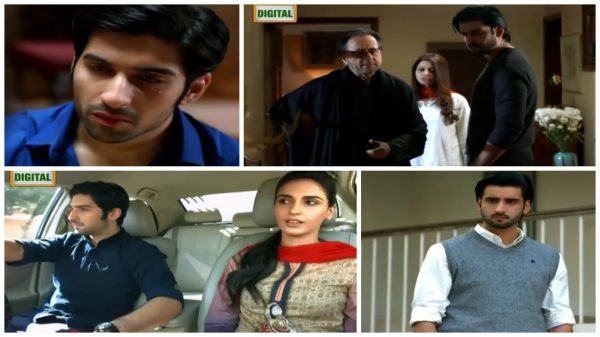 Even though Sherry is hell bent on making sure Zainy stays with Ahmer and does not speak to her but when she reaches out for his help, he appears and takes her home. She asks to be taken to Yusuf’s house, saying she wants nothing to do with Ahmer but he drops her back at Ahmer’s house and tells her ‘ Tum ek guzray huay pal mein jeenay wali larki ho. Yeh jang tumhari hai jo tumhein he larna hoga. Apni iss laraayi ko doosron par masalat na karo’. I feel Sherry is being harsh for Zainy is clearly miserable and feels she has made a mistake so just because she is pregnant now, Sherry is letting his own feelings for her overrule what is actually probably better for Zainy. Sigh, a glitch in angel Sherry’s character. Zainy is immature, makes nonsensical and impulsive decisions but after how Ahmer treated her when he locked her in her room and then this incident at Aslam’s house I would think Sherry should have let her gone to Yusuf’s house and his own feelings for her are overshadowing and clouding his judgement for what may be better for Zainy.

Ahmer – yet again earnest, yet again declaring his undying love, yet again asks for another chance. And Zainy relents. Time passes, Zainy’s baby arrives and we see Yusuf is unwell and confined to a wheelchair. Novera, the ever ‘tactful’ Novera feels he can not recover from whatever illness seems to have overcome Yusuf. Ahmer seems to quite busy with his production business but not doing so well for he is unable to pay all the household expenses. Whatever happened to Zainy’s CSS result? When he promises her that she and the baby are his responsibility, is that when it was decided Zainy would give up her pursuit of her career? I may be digressing here but seriously why did Phuppo never get married and have a family of her own? She is nice looking, a reasonable and sensible woman – did she not deserve more in life than to pick up after her crazy brothers and their crazy offspring?!

I have really enjoyed this drama so far and I like the twists and turns and unexpected events the writer has thrown our way, which has kept this drama interesting. Seher Afzal as with every episode has acted really well in this episode and Muneeb Butt (yes I know a lot of us are not fans) – but he has fit well into the character of Ahmer. The OST and the visuals give a very ‘slow’ look to the drama but after the first few episodes, the drama has been anything but slow.Next week’s preview shows that Beena is back (or maybe she had never really left) and we see Zainy with Yusuf and then a much older Zainy meeting an older Sherry. So I suppose Sherry and Zainy do not end up together now at least – maybe in their ‘barhappa’? Looking forward to the last episode and seeing how this all ends. Any guesses as to whether Sherry and Zainy end up together – ever?! Would love to hear your thoughts!