The team of Udaari has definitely succeeded in making sure that things don’t get too dark and ugly in this drama. While causing awareness about child abuse is the primary reason why this drama was made but the entertainment value of the drama, the scenes that make you laugh sometimes outdo the bits that send shivers down your spine. This episode focused more on Meeran and Sheedan’s first day in Lahore. There were some scenes that were somewhat repetitive and could have easily been chopped down. For instance we have already seen enough of Arsh complaining about Meeran and her mother, that particular aspect did not deserve so much screen time. Just like all the previous episodes the scenes in which Imtiaz got an opportunity to violate Zebu was shown in a subtle yet very convincing manner. Without showing anything that would hurt the sensitivities of the viewers the director managed to put the message across. The message in the first scene was loud and clear – a molester will grab any opportunity that comes his way, he does not care if the mother is in the next room. It also goes to show that a lot of children are abused in their own home. A child should be safe inside the four walls of his or her home but that is not always the case. Although Imtiaz’s character is despicable but the word “googli” was hilarious!!! Since he is the only one who knows a little something about Google therefore he was shown bragging about it. It also went to show how this easy access to internet can be misused by people who can easily access such websites. Ahsan Khan owns his character, he is faultless as Imtiaz. He makes you forget every other character he has ever played and you only see him as a ruthless pervert. Sajida has no clue what is going on and she has also accepted Imtiaz’s insulting behaviour towards her majorly because he takes good care of Zebu and looks after her!

I must say that Sheedan’s overconfidence (I don’t agree with Arsh on a lot of things but I do agree with him on this one!) was surprising! We always saw her as a very vocal woman but I expected her to be slightly less vocal in this new environment but I was so wrong!!! Sheedan’s never-ending chatter and her confidence in her singing stood out more in this new place than it ever did in the village. Sheedan is completely different from these people and this contrast was shown brilliantly! The way she refused to give Arsh her vote of confidence was absolutely hilarious! She is so sure that Meeran can do so much better than him or anyone else! It was shocking yet entertaining to watch Sheedan feel right at home in this new place, she was not the least bit intimated by these people. Also, the reaction of Meeran and Sheedan when they were served lunch was spot on. They missed family members who would have done anything to eat such food and at the same time they enjoyed every bit of it. Meeran can tell when she is not wanted or when she is not being appreciated therefore when she starts singing with Arsh there are bound to be problems. Bushra Ansari stole the show yet again! The way these scenes were written and the manner in which they were portrayed on screen made me forget that I was watching a drama! It did remind me of all those helpers who come straight from the villages. Urwa Hocane has been doing her part really well too; her body language and dialogue delivery is on point. 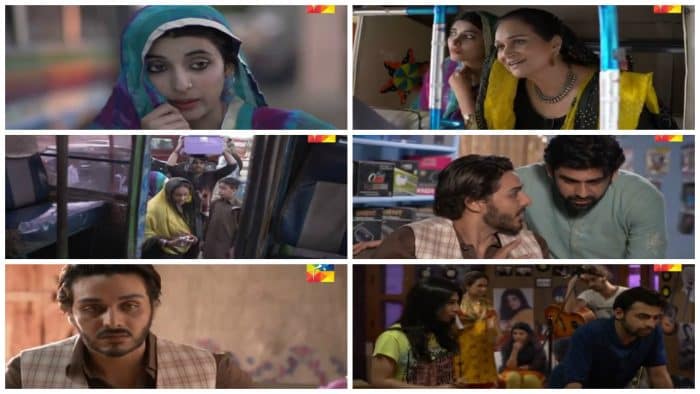 Milli’s conversation with her mother outside their house was another meaningful conversation which basically went to show that Milli’s mother was not skeptical about these people because of their financial status or background. Laila Zuberi yet again failed to deliver in these scenes. She seems to be more concerned about how she was looking when she talks instead of focusing on the dialogues.

Throughout this episode Imtiaz was trying to prove that Meeran and Sheedan had a bad character because they left for Lahore alone. This actually reminded me of a seminar I attended once in which Asma Jahangir was one of the speakers and she referred to this mentality! The way women are labeled in this way all the time because of such reasons. People who have known Sheedan and Meeran for a long time including Illays refused to believe what Imtiaz said. Imtiaz’s actions went to prove that this was his way of getting back at Meeran for refusing his ‘offer’ which basically sends out yet another message – when a man talks about a woman like that then it is highly likely that the reasons might be similar to the one’s shown in this drama! Sadly, this is actually a very true depiction of our society where defaming a woman can sometimes be the easiest thing to do! It happens not only in villages but even in workplaces where seemingly educated and enlightened men and women work together! Imtiaz’s bruised ego won’t let him rest and I am waiting to find out if he manages to accomplish anything by bad mouthing about these women.

There was a little too much of Arsh and the gang in this episode and their scenes unfortunately didn’t have much to add to the track. Other than that this episode managed to convey some truly important messages with Sheedan (Bushra Ansari) providing the comic relief  and keeping things from getting too serious.

The preview of the next episode suggested that Zebu will start showing that she is mentally disturbed and Sajida will start getting worried for her. Arsh and Meeran’s scenes in the preview showed that things will not be easy from here on. I am definitely waiting to find out how Meeran manages to overcome all these barriers and become a part of this band – right now it seems impossible for her to groom herself to come to that level.