so this episode of Zakham was not at all impressive. It was slow, uninteresting and created more mysteries than solving it.

Earlier, the issue was only why Khawar was behaving this way.. what is his secret? Now everyone is behaving strangely. There were a lot of things that I did not understand from this confusing episode. Firstly, why is Takbeer suddenly losing interest in Ahmed? She goes from saying that he is her priority to finding an old diary of who knows whom and that makes her forget about the crying baby. She was making such lame attempts at calming Ahmed whom she had claimed to love so much that I felt sorry for the little lad whose mother has left him in hands of these two lost souls. 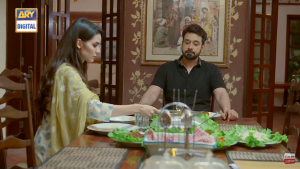 Secondly, why did she call Moosa from the hospital.. was it because she accidentally dialled it from her memory. If that was so, then why did she not call the person she was calling initially to inform like maybe her parents or Khawar?

We all know Khawar is mentally deranged, so he called her dad in a fit of rage and suspicion that Farhan has taken away Takbeer to Moosa. It had to be the most childish thing ever but for her family to take it literally and her father threatening to kill everybody was really stupid.  Are they all mentally so disturbed to start a fist fight just because Takbeer and Farhan have gone somewhere without telling anyone? 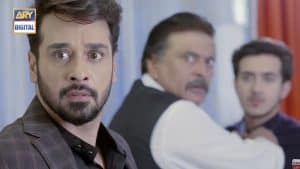 Similarly Khawar was so upset that she had not taken good care of his child while he himself had complained last night to his sister that she gives too much attention to the baby. Makes no sense..

The only touching thing today was the conversation between mother and daughter. When Khawar broke Takbeer’s phone and she put a hand on his shoulder to calm him down, it looked very unnatural. He had blamed her wrongly and then slammed her phone into the wall. It may have been extremely sensible of her to relax him like that but it takes a super human kind of patience, which is highly unusual.

Basically, nothing happened in this episode that was of any significance. There were just some filler scenes which highlighted Takbeer’s confusion, Khalida’s arrogance, Khawar’s insecurities and craziness and Takbeer’s families’ typicalness. And we already kind of knew it ..

let’s hope for some improvement in the next episode..