OMG! This drama is so annoying that it’s not even funny. All the characters are either half or fully mad because what they say & what they do doesn’t really make any sense anymore. No wonder why this animal filled Zid-Zoo was shifted to a 9PM slot on Sundays because that’s the exact time when people are struggling to fall asleep to begin their week with a fresh mind & this drama is a perfect yawn provoker so I think HUM TV is actually doing a favour to its viewers here by helping them going to bed with much ease, so we should thank them for it.

Everyone in this drama certainly needs a life. I just don’t understand why Saman is so much into Zainab? I mean it’s just so odd. Apparently she says she feels a lot for her & has garnered affection for her but then I mean is Zainab so important for Sanam that she is even ready to get beaten up by Zainab’s a half human half chicken of a husband? Like Zainab got married to a junky of the year who himself doesn’t know whether he’s a human being or a chicken or a puppy & Saman seems pretty comfortable in that zoo of an apartment? The way Saman has been acting lately is just so unlike her because she was the one who always used to ignore & run away from each & every person who said something that she didn’t agree with. She left her parents & cut all ties with her family, then she left Omar’s house because she didn’t like the way he imposed himself on her, then she left Qasim’s place because he also rubbed the reality on her face & now she is ready to put up with everything she comes across while staying at Zainab’s place? Also, whatever Saman says to Zainab is just so ridiculous because firstly, no matter how much Sanam hates Micheal, he is Zainab’s husband & did she really think that Zainab would leave her due to Saman’s incessant nagging? As far as I remember whenever Saman was told to talk Rukhi out of marrying David, she always stood by Rukhi’s side because she believed that everyone was entitled to making their own decisions, so similarly why doesn’t she understand that Zainab is entitled to do the exact same thing as well? Why Saman does really have to bother about what Zainab does? To be honest, I was happy & relieved to see that the character of Micheal died a chicken ki maut because it was getting so hard to tolerate him on screen, I mean as if Zainab wasn’t enough to annoy us that her lunatic husband was also introduced!

Honestly speaking, if the writer really thinks that she’ll be able to make us feel for these mentally incapacitated & challenged characters then she’s highly mistaken because people feel sympathy for those who are sane & are suffering from some sort of crisis but here, these people are brain-free to begin with, so it just doesn’t matter what happens to them or what they go through because by the end of the day they all don’t really matter & oh! Who’s the person responsible for sound effects of this drama because may I ask what’s up with that annoying dhuzz dhuzz sound effect at every minute expression of Saman? She’s the one who’s responsible for ruining her life so why are they trying to make it sound like every single time there’s an asmaan that tooto-fies on her head? Sorry she isn’t a bechari & she doesn’t deserve our sympathies so please stop using these dramatic or sad sound effects to enforce something which they all don’t deserve. I just can’t tolerate how they go on a sad song spree after every single conversation or by the end of every scene because hello, this drama should have some comical sound effects because it’s now coming across as a sitcom & not a serious drama & if you don’t believe me then have a look at Zainab who has the nerves to wear a pink clip on her head!?!?! Well, I must commend Nosheen Shah for actually doing this to herself because it takes a lot of guts to look like ‘that’ on screen! 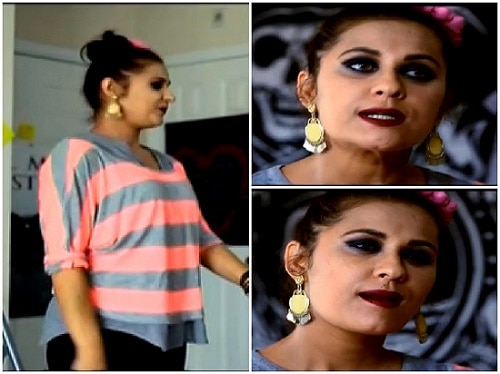 Accha, I mean if Rukhi loved her father soooooooooo sooooooooooo soooooooooooooooooooooo much then can you please tell why did she get married in the first place? What’s the role of David in her life when she was living such a fulfilling life with her father? Ever since she has gotten married, all she has cared about is what her father says & what he does, so when she was such a daddy’s girl why did she decide to become someone’s life partner? I am so annoyed at the way Qasim’s attitude fluctuates because he’s giving a tough competition to a coin that flips within microseconds. Also, can someone tell me why is he still stuck up on Saman & blames her for ruining Rukhi’s life because if we take a good look at his age, he should be mature enough to gracefully accept that he’s the one who failed in teaching his daughter the difference between a right & a wrong but very conveniently he puts all the blame on Saman whom Rukhi has just met probably a few weeks ago! In this particular episode Qasim actually made me question his brains too because where at one moment he seemed to be enjoying Rukhi’s company, the next he was seen throwing a hissy fit, where at one point he blames Saman for what Rukhi has put him up with, the next moment he tells the same girl; Saman to knock some sense into his daughter, like seriously? I mean, Qasim Uncle appka deemaghi tawazzun theek hai na?

Is it just me or the conversations between Saman & Rukhi really never make any sense? Rukhi seems like such a typical girl who takes her kitaabi louuuu stories so seriously because every dialogue she speaks starts with the word ‘mohabbat’ & ends with the exact same word too? I mean mohabbat se itniiii fixation??? Ohkay if she is in love & she loves being in love then why is she still so incomplete & unhappy even after she has found her one true love? Plus Rukhi poses to be very smart & sharp so when she knows that Saman was abused by Micheal, why didn’t she tell each & everything to Omar because she seems pretty close to him as well? She knows that Zainab’s not a good person & her company isn’t great either, she keeps on throwing some hints in front of Omar about how Saman’s not safe, so why doesn’t she opt for transparency & tell him the truth straight out? What’s she waiting for?

Accha any idea about where Saman’s parents are? I mean when the parents marry away their daughters in abroad, they put in an extra effort to keep a check on how well their daughter’s been doing but there’s not even a single phone call from them? Plus I don’t understand when Saman is earning some bucks, why doesn’t she move to some safer & secure place that’ll provide her the peace of mind that she’s been looking for? She herself chooses to stay in a zoo which is so unlike her & oh when she got beaten up by Micheal, I actually couldn’t stop laughing because the acting & the dialogues; both were hilarious & didn’t stir the emotion of sympathy that the drama-making team was fishing for. Anyways, the preview of the next episode seemed twisted & annoying too. I still don’t understand what the writer here is trying to tell us. Share your thoughts if you’ve deciphered the mystery. ;)