Whoaa, after I was done watching this episode, I spent some time sulking over the fact that my exams marked their entry right when the most happening episode of Dusri Biwi went on-air! For so longgg I was craving this climax because I was curious to know how’d Aisha react to the worst news of the century. I had initially intended to review episodes 12 & 13 together, but no no, this episode must be discussed separately!

I don’t know if I should be saying this but I have this newfound respect for Amir :P- okay, he is a psychotic guy who can stoop low for revenge but breaking the news about Hassan and Farah’s marriage is perhaps the most qaabil-fakhr thing he’s ever done because needless to say, we all were desperate to see Hassan’s true face being exposed to Aisha and since it’s Amir who finally did the honours, I am thankful to him for giving us the kalaijay-pay-thandak-parnay-wali feeling! I think this was the right time for disclosure because had they not shown it to us any sooner, the story (which is already the last thing that can get the viewers jumping for excitement) would have become stagnant. I don’t have any complains with regards to the pace of the show because thankfully, I guess the director had enough brains to  figure it out that a sound pace is the only thing that can attract viewers to this play. I don’t know the name of the actor playing Amir’s role but I must say that his facial expressions were spot-on especially when he said, ”Aap nay apni bari begum sahiba ko bataya nahe kay aap nay shaadi karli hai aur ab Masha Allah say bachay kay baap bhi bannay walay hain.” I was enjoying every bit of Hassan’s helplessness and this was as kalaijay-ko-thandak-providing for me as it was for Amir :P 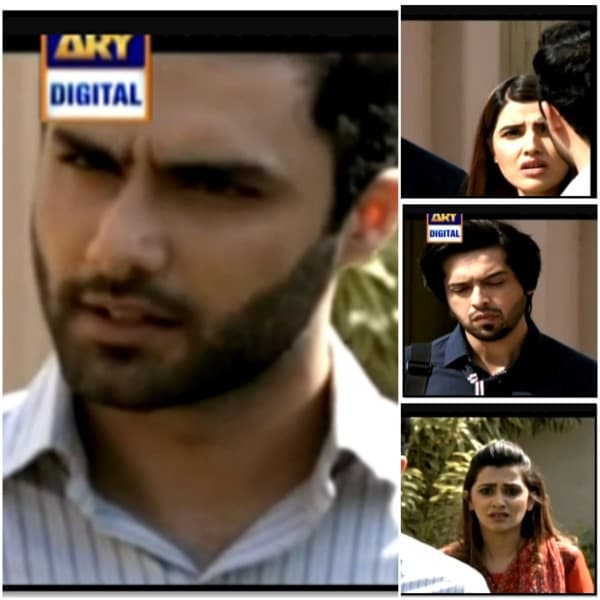 Coming to the serious part, Aisha’s reaction has been spot-on (although a tight slap/punch was something I was craving lekin khair humari bari begum sahiba bari lehaaz wali hain :P) and seeking Ahmed’s support was totally the right thing to do. She rightly held Hassan and Farah equally responsible for everything and I liked Aisha’s outburst in front of Ahmed- Ahmed had been wanting to handle the situation by concealing the news because he wanted to see his sister living a ”happy” life with Hassan but Aisha was upset with his approach, which goes to show that she’s not one of those people who simply refuse to face the truth just because they don’t want their illusions destroyed and going by Aisha’s reaction, it seems like she  definitely doesn’t want to live the rest of her life with someone who has been nothing but dishonest & unfaithful to her. I would LOVE to see her moving on- my wishful thinking, huh? I must confess that I honestly felt a lot for Aisha and I had no trouble relating to the emotional turmoil she was going through because since day one, they left no stones unturned in showing us what Hassan means to Aisha. Her world revolved around him- she trusted him like anything, only to find that all this time she was trusting an unimaginably shameless guy who just HAD to turn into a beizzati-prone, behiss & bewafa shauhar after being smitten by a girl with fiance-problems! Aisha was gullible and naive but she was plain sweet and meant no harm so seeing her crying over a guy like Hassan was something depressing. 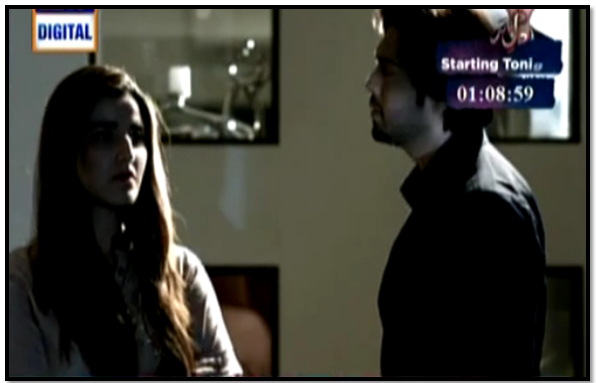 You know when Hassan said kay Saman has never even seen him and Aisha being upset with each other, I couldn’t help but question it aloud that when things are sooooooooo picture-perfect, things don’t just go horribly wrongggg like this and since the writer didn’t bother to make it clear, can someone please do the honours and tell me again that all of a sudden, WHAT did actually compel Hassan to resort to dusri shadi?

This episode, to some extent, did show how dusri shadi was nothing but a mistake for both Hassan & Farah and Farah’s flashback showing how her sister had warned her about the adverse side to dusri shadi also indicates that Farah regrets this decision. Hassan has not only lost his reputation and respect in the eyes of Aisha, he is also struggling financially and it’s good that they’ve portrayed how taking care of two wives also gives rise to financial problems. He misses his daughter and his daughter misses him and this is the second ‘Big Bang’ play in which a strong father-daughter relationship is shown and the child star gets a considerable amount of screen time.

And ohh, it seems like Karachi is the safest city in the world because quite surprisingly, both Aisha and her brother keep their homes unlocked and anyone can barge in-just like that!

Even though this episode was comparatively better than the previous episodes, the initial ‘bonding’ scenes between Aisha & Farah are actually worrying me because Aisha commented how having a son will remain her and Hassan’s ‘unfulfilled’ desire so you never know- they could be setting this unprecedented trend of Husband+Biwi No.1+Biwi No.2+Daughter1+Son1=WeAreAHappyFamily!  Hayee, like I mentioned before, the thought alone makes me shudder!

What do you think of the latest developments? Share your thoughts, please!