Tonight’s episode of Ehd-e-Wafa was extremely emotional and simply beautiful in every way. This was the kind of episode which makes your cry and laugh at the same time. The director Saife Hassan did complete justice to all the beautiful, moving scenes. The actors too did a commendable job of translating these priceless emotions on screen. Ehd-e-Wafa gets more emotional and impactful with every passing episode. Last week after the episode went on air there were so many twitter users who criticized the writer for suggesting that politicians can influence the people who selected higher ranking officers after candidates pass the CSS exams. It seriously infuriates me how ill-informed such tweets are since it was made quite clear in the previous two episodes that Shahzain was lying and he had nothing to do with Shehryar’s selection. People of course are free to discuss the bureaucracy and politics whichever way they want but why do it with #Ehd-e-Wafa when the writer is not implying anything like that! I feel that there are so many people nowadays who rely on social media when it comes to figuring out what a drama stands for or is conveying. My request to all such people is to at least watch the entire drama before drawing conclusions!

Tonight’s episode of Ehd-e-Wafa had the most emotional opening scenes which were yet again filled with positive and impactful messages. Saad’s parents conversation about his wedding was truly refreshing. After watching so many dramas which revolve around yeh shadi nahi ho sakti scenarios, Ehd-e-Wafa is truly a treat to watch in which the consent of the parents is the least of the children’s worries! It is truly amazing how the parents and children in this drama have been shown as partners. This partnership is the reason why Dua and Saad were able to focus on their education and their careers. They knew that their parents will support them whenever they decided to get married. 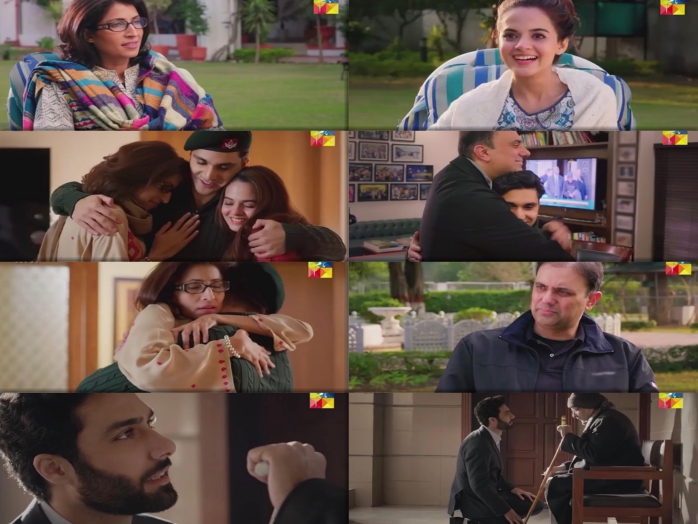 Saad’s mother’s constant support and her wise approach towards everything had been shown through a few scenes in the past few weeks and tonight we also saw his father being really cool about the whole thing! This was such a good way of showing that there was nothing wrong with children wanting to get married out of their own choice. Dua’s mother’s attitude was the same too. The open-minded and wise approach of the parents is definitely something we need to see in dramas more often. I absolutely loved how this entire track has been covered throughout. While the writer has quite a few inspiring scenarios for the young people in this drama, at the same time there are a few tips for the parents too! Saad and his father’s scenes were acted out so well by both these actors. It is almost as if they are actually related, their performances and the chemistry these two share has been simply remarkable.

Shehryar and Firdous sahab’s scene was extremely emotional as well. The way Shehryar took Firdous sahab to his office and made him sit on his seat was such a nice gesture to show just how much he valued and respected him. The writer intelligently added Firdous sahab in this present scenario since the viewers already had emotional attachment with him and his son. Later on, everything was covered realistically because surely it wasn’t going to be easy for Shehryar to deal with a land mafia which was well connected. In this way the writer Mustafa Afridi yet again highlighted another corrupt element of the system. Ahmed Ali Akbar and Khalifa Shajeer Uddin’s performances in these scenes were absolutely brilliant. Ahmed Ali Akbar is such a phenomenal actor, I  am eagerly waiting to see more of him. 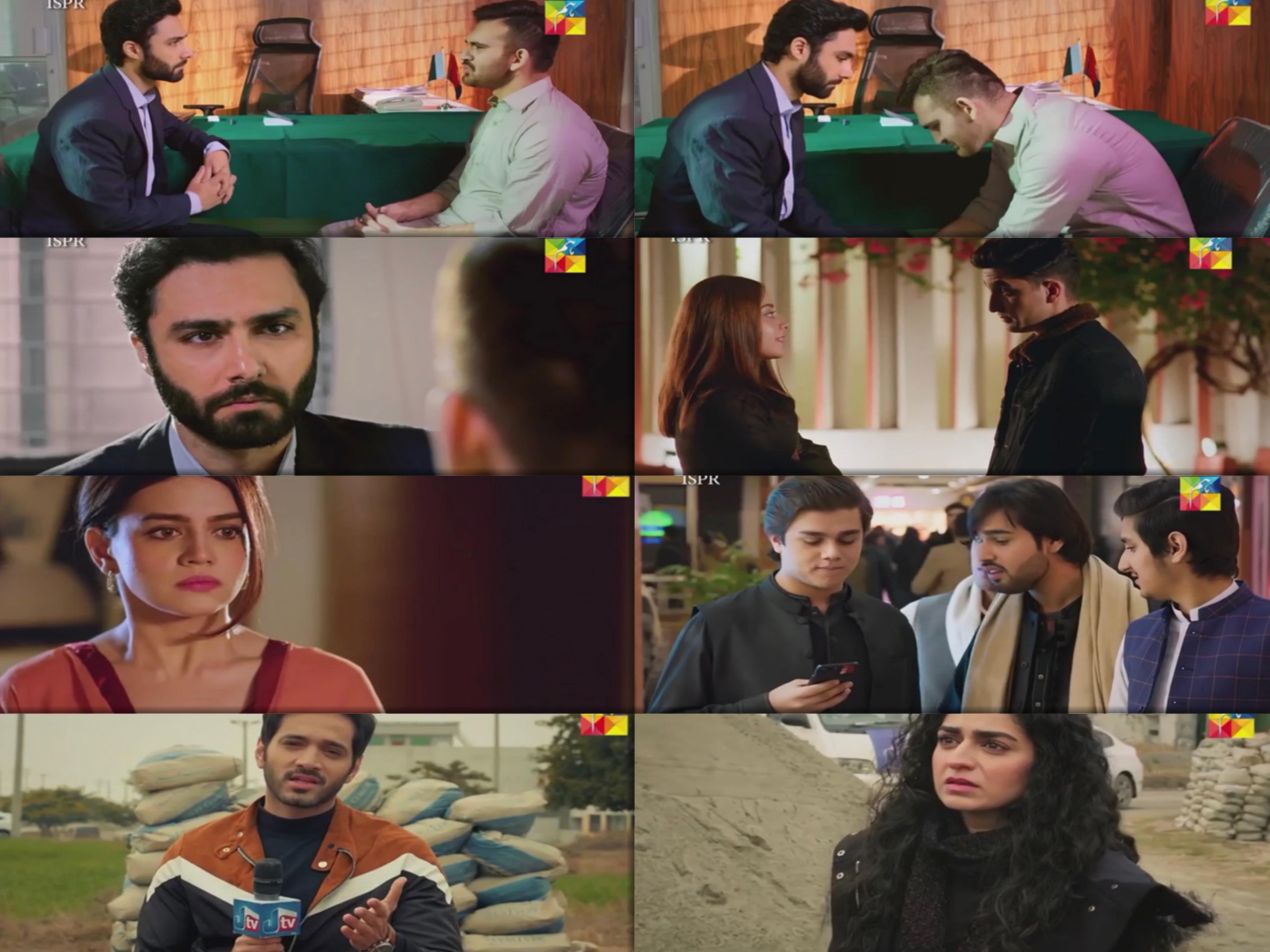 The way Saad and Dua’s track was taken forward was yet another impactful and emotional element of this episode. Saad and Dua clearly are partners as well. Alizeh Shah and Ahad Raza Mir looked great together in this episode and their love story is my favorite at the moment. It is the perfect example of a healthy relationship and how partners should support each other. At the same time, they have fun with one another and there is enough romance to make it cute and entertaining. Their scenes are not too plain or too cheesy. Dua’s dialogues about how Saad’s family made her feel were so easy to connect to because the viewers got to see just how welcoming they all were. Saad’s father opened the car door for Dua which was such a wonderful way of welcoming her. Saad’s parents acceptance of Dua and Saad’s support for her was the best part of this track tonight. Dua’s comment about the ring size and the other candid conversations were truly delightful to watch. Few weeks back I couldn’t even have imagined that I would find their scenes together so sweet and heart-warming. 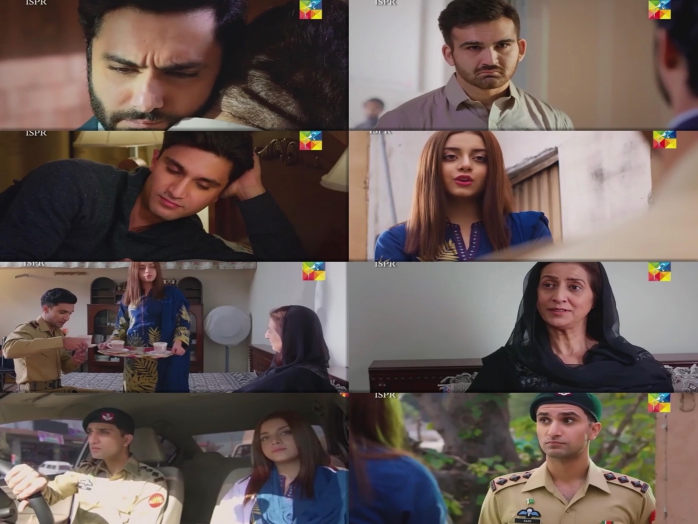 Saad and Shahzain’s scene tonight showed just how far Saad had come. All this time we had all been waiting for Saad to be the leader, the bigger person with Shahzain which he had been with his peers in the PMA. Tonight, he did just that. Even Shahzain seemed like a vulnerable individual who was in need of love and attention. Their conversation was written really well and I am honestly relieved that these two are finally back to being friends after so many years.

The timeline in this drama can be confusing at times but other than that Ehd-e-Wafa has taken off for sure. Tonight’s episode was a complete package, it was emotional, entertaining and well paced. It was written and directed exceptionally well. Ahad Raza Mir and Ahmed Ali Akbar are remarkably brilliant actors who never cease to impress. They are both so good at translating varying emotions impeccably on screen. Aadi Khan was cute as the over-smart Malik Shahzaib. I hope that Firdous sahab’s track will be handled well in the upcoming episode. The preview of the next episode showed that all these friends will finally get together on Saad’s wedding and it seems like Dua’s inclusion in the armed forces will perhaps be a surprise for Saad. Really looking forward to the next episode of Ehd-e-Wafa already.

Did you watch this beautiful, fun and emotional episode of Ehd-e-Wafa? Don’t forget to share your thoughts about it.