Be Inteha Episodes 1-21 Review – No Baddies Yet!

So I sat on this drama like a mother hen does on her eggs. Waiting for it to hatch (read end) because with the never failing Midas touch that I seem to have with every drama I review derailing off the tracks the minute I have posted my review – I did not want this one to lose its charm. But then I remembered what I read once about how a mother bird teaches its baby to fly by throwing it out of its nest with the confidence that it will spread its wings and fly (not sure if that is true but the thought stuck with me anyway!). And I decided to switch to mama bird and post this review hoping the drama will continue to be entertaining.

A Six Sigma Plus production, Be Inteha is directed by Qasim Ali Mureed and written by Rida Bilal. The drama airs every Wednesday on Urdu 1 and has aired 22 episodes so far. Six Sigma Plus is quite a popular name but the writer and director rang no bells. When I saw that the lead couple in the promos is Sami Khan and Naveen Waqar, I was not too tempted to watch the drama either until I heard the OST and nothing reels me in quicker than a catchy OST. 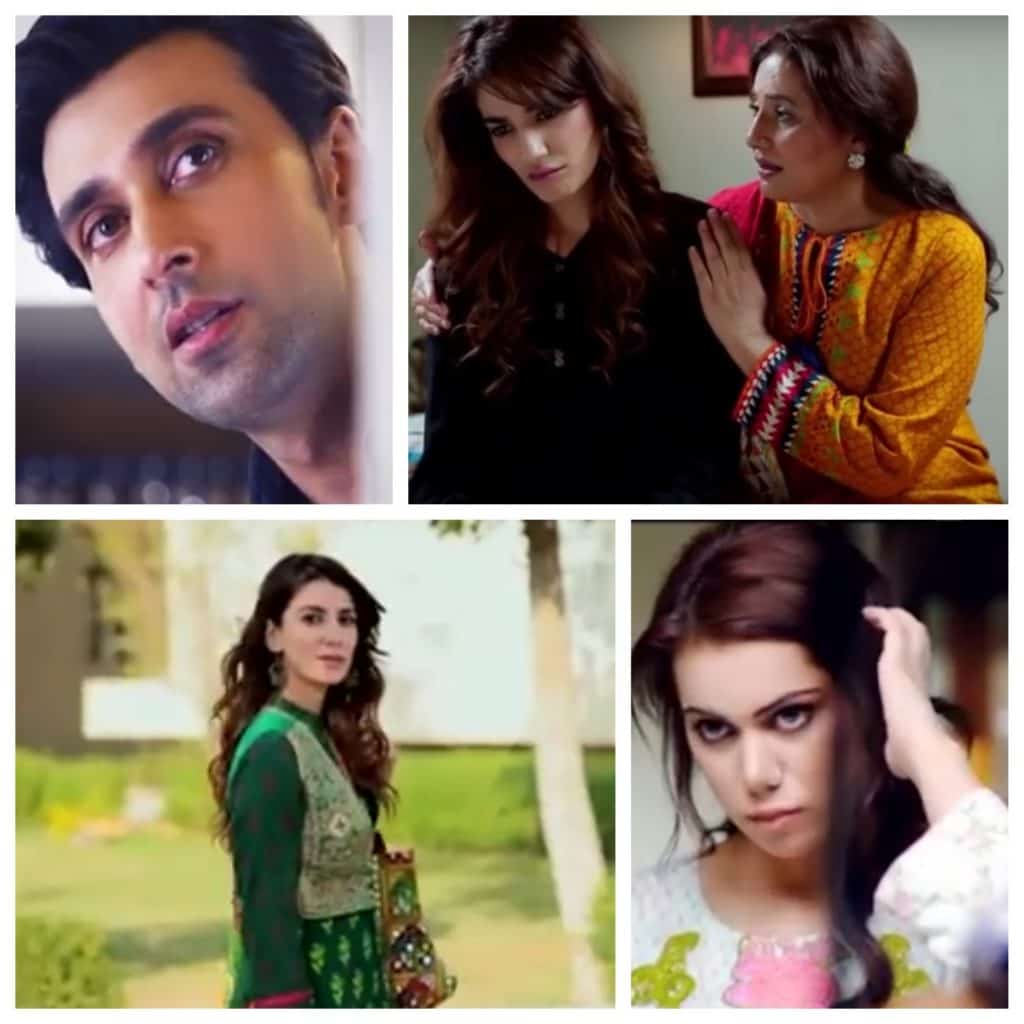 Be Inteha revolves around three families. We are introduced to Bisma (Naveen Waqar),her sister Zara (Ghana Ali) and their parents Waseem Abbas and Shaista Jabeen. Bisma is engaged to be married to Ali (Faris Shafi) whose parents have been close and long term friends of Bisma’s parents. The third family comprises Sherry (Sami Khan) and his mother Rubina Ashraf. While Bisma is not in love with Ali she is not against the upcoming marriage either. There is a restlessness about her but she does not seem to be moping around or opposing the marriage either. Until Sherry spots her while out with his mother shopping and it is a classic case of love at first sight. He then pulls out all the stops to get married to Bisma.

Now I am in a bit of a quandary here. If I go further into the story, then I give away everything that follows and while there is nothing in this story that would excite Sherlock Holmes – it is a very pleasant watch. Let me focus instead on what appeals to me in this drama:

Simple yet not too simple
For those of you who have often read my reviews, you would have understood this much about me by now that I seem to want to happily fish out dramas that are not too popular, marketing wise nor viewer wise and end up watching them. That strategy, or preference, sometimes fails me and I lose interest in the drama or keep watching while tearing my hair out but sometimes I too am pleasantly surprised like I was with dramas such as Tum Yaad Aye, Sun Yaara and Tumhare Hain to name a few. I do not mind the predictability, actually welcome it and while this drama seems like a simple love story too it has a few surprises and the manner in which the story is presented keeps my interest alive.

Interesting dialogue(s)
I was on the brink of doing a review after watching the first five episodes when Sherry said about how he would love to say he would give his life for Bisma except that he does not want to because he wants to live his life with her, a long life, rather than just giving it up. That line really caught my attention for man, how many times have we heard that line in dramas and movies about how the ‘hero’ declares he would lay his life down for the ‘heroine’ and we all say, this! He loves her no doubt! Umm. But how refreshing and interesting was it to hear him word his sentiments differently and still have me hand out a similar verdict :) Which brings me to another thing that stood out in this drama and I loved.

Cliché confrontations
What may that be, you wonder? So imagine a cliché coming running at you. Same scenes, same lines done to death. You nod your head, reach for your phone, mentally already saying the lines you expect to be said because that is what happens in each drama, right? For instance, when the about to be bride suddenly does a runner and the sister is offered as the ‘replacement’ bride. Where the mum in law dishes out ‘taana pe taana’ because the bahu dared to express her feelings to her parents about her choice of groom. Where spurned men and women throw ‘forgive and forget’ and ‘move on’ into the garbage can and sink their teeth into the so not interested ‘spurner’ like a dog with a bone and will just not let go. You get the idea. This drama brings you ‘that’ close to the cliché and then you gasp softly, wait what? Nicely done!

Visually pleasing & OST
I watched this drama online and the picture quality was great which really makes an impact on my decision to watch a drama or not. The OST is so addictive and in my search to download it, I happened to come across some comments that suggested it was an adapted/modified version of a song sung by the band Soch. I have no complaints though and prefer this OST version.

Sami Khan
I know I should say amazing acting and chemistry by everyone in this drama. And yes, Waseem Abbas, Ghana Ali, Naveen Waqar and Faris Shafi all did a decent job but Sami Khan is hands down the reason why this drama worked for me performance wise. I loved how he portrayed Sherry’s character, the brooding, emotional man in love and how he tries to convince Bisma he loves her. Hanging outside her college, otherwise creepy or stalkerish in the real world, was all done so well that I really enjoyed it. 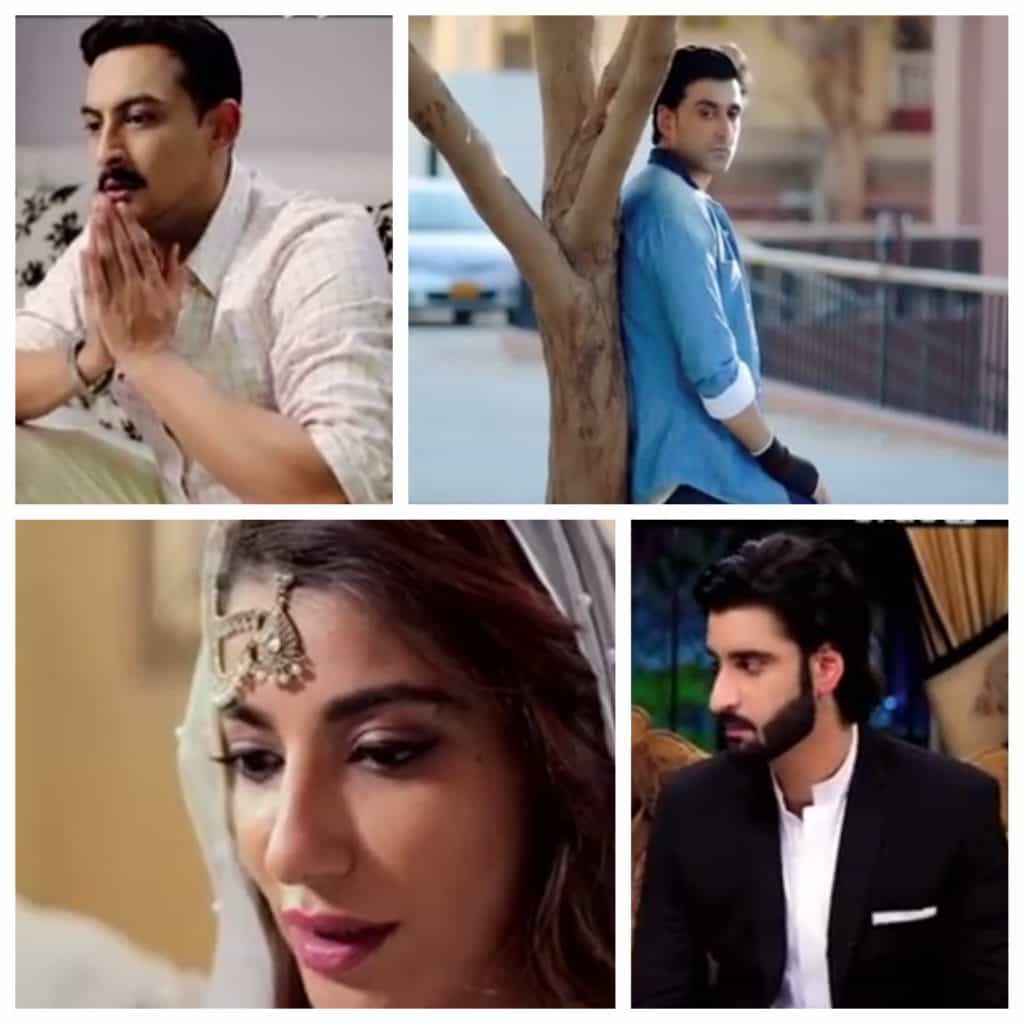 I have huge issues with introduction of new characters after ten episodes or so of a drama have aired. It is as if I have emotionally become involved and understood the people so far and suddenly you throw in a medley of new characters and more often than not – does not work for me. Mann Mayal and Intizar are two examples that suddenly spring to mind and that is why I am a bit wary of Be Inteha now for Agha Ali and Saba Hameed have made an appearance a couple of episodes ago and I am still waiting to see how I feel about it.

I purposely did not dwell on any details in this overview for those of you who may be tempted to watch this drama. Agha Ali is the misunderstood and egoistic son of a rich socialite mum who wronged his father (no disrespect to real life comparisons of this situation but this scenario is fast becoming the ‘doosri shaadi’ of our dramas nowadays). The story has a bit of a predictable turn now and I can only hope that the cast is able to do justice and keep our interest intact till the end. I would not classify this as a guilty pleasure, rather as I am discovering there is a category somewhere between a guilty pleasure and a must watch and Be Inteha sits very comfortably in that category.

The drama does not offer something truly unique and my beef with that? None – for I reckon we have had quite a bit of it over the past couple of days. Sorry, I could not resist haha. Eid Mubarak! Would love to hear if any of you have enjoyed watching Be Inteha as much as I have, or the sweetness got too much for you, or you just love the OST and have had it on repeat for a while 