I should keep a log. Or Mohsin should get a hobby. A new hobby that is. For now, he seems to have not much else to do but find new adjectives for Aina – none of them flattering. Along with Mohsin, Sajal should also find herself a hobby. She does seemingly nothing all day except pop up unannounced behind Aina with her ‘tum manhoos’ rant. Actually scratch that. For when she let her focus shift from Aina to someplace else, she has ended up with the ‘jaadoo tonay’. Sigh.

So quite a bit has been happening at Mohsin Villa. Tempers flaring, accusations being hurled and meltdowns. When Aina started telling Noman about her past, she barely got the beginnings of her story out and it was too much for Noman to handle. I am glad she decided to come clean and good riddance to Noman! Mohsin and Sajal are united in their despair for they were hoping to offload Aina on to Noman but she thankfully had the sense to see that hiding something big as this only for it to raise its head after marriage would worsen matters. Aina had begun to find a bit of her spark again for I loved the raised eyebrow and face she made when Mohsin said that accepting anything from her would be haraam for him. Seriously?! But the maid’s antics which led Sajal and Mohsin to blame Aina sent her back to being mazloom and weeping round the house. Sajal’s mindblowing latest accusation obviously was the last straw and sent Aina over the edge and although the whole scene in the rain was a bit dramatic it did not seem overly so especially as I could feel Aina’s frustration. She feels she is to suffer for the ‘mistake’ she made but there is only so much someone can take and with all the negativity coming at her from each direction, for Sajal to make a mockery of the one solid relationship in Aina’s life would send her over the edge. 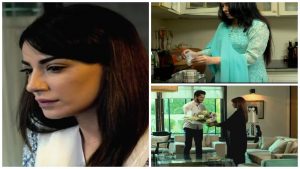 I thought Mohsin was just a stern, negative man but I am beginning to feel that the background ‘evil’ music that plays when he is around is certainly befitting! When he walks up behind Aina when she is crying I wanted to scream, nahin bhai, Nadia nahin hai, and thankfully he heard me, haha! But what is with the uncontrollable anger and name calling. He is like Sajal where he shows up to throw in his two cents, his taanas and screeches and disappears again. He and Sajal seem more saggay to me – he and Faraz can not be brothers really!

Even though Sajal is negative as, well negative as negative goes and she is really crossing the line with throwing accusations left, right and center sometimes her comments made me laugh. For instance, when she said about Faraz wanting dinner, that ‘girlfriend nay lunch karwa kar nahin bhaija?’. Then when Aina said Mohsin does not eat ‘baasi khaana’ (food cooked in the afternoon – baasi? Really?) and Sajal quipped that now Mohsin will eat whatever is prepared for really with his wife gone and his ‘wonderful’ attitude, Mohsin is expecting a bit too much I would say! Her reaction to meeting Sabrina was so immature, I guffawed and even more so after Sabrina’s ‘tumharay shohar ko bulaoon gi’. What was that about, by the way?

Faraz seems to be the only one with a very sensible head on his shoulders. His shocked expression when Aina was blamed for the stolen money, his comments to Sajal and Mohsin and the way he tries to raise Aina’s spirits make me feel he is going to realise very soon that things need to change or I think Sabrina may just look like a very attractive option to him – job,Amrika and taana-less, the whole deal! 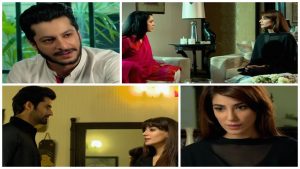 With emotions running high and Aina and Faraz beginning to lose their patience too, throw in the maid’s plans and it seems like there will be a huge explosion soon and I am looking forward to it. Next week’s preview showed Aina had more to say than just cry and suffer silently and I hope this does not blow up in her face and Mohsin and Sajal finally do back off. With so many people in one house and nobody having a life outside those four walls, it is hard to find time alone but seriously they should all start watching their backs – literally – from Sajal when she is pouring all that sugar in the tea/milk, to Aina when she is standing weeping in corners and even the maid when she is stealing!

Naveen Waqar continued to be impressive as Aina in these two episodes. The scenes where she has a breakdown and screams were done really well for she was screaming but it was not the shrill, unbelievable type, rather one could feel her desperation. I could not help being reminded of Sara from Humsafar though in the scenes where Naveen was wearing that black outfit when she speaks to Noman. Sajal reminds me of Tweety bird from Sylvester and Tweety who shows up big eyed everywhere gloating in her own goodness. I think all Faraz needs is to be taken by the hand towards an open door and be told something along the lines of ‘ja Simran ja – jee lay apni zindagi’ and Simran/Faraz shall gallop! I could understand Mohsin better if we were shown moments of slight regret of how he treats Aina and puts it down to his grief but his anger seems to know no bounds and I am not sure where all of it is coming from. Also, Emaad Irfani can not pull off the angry look so he needs to get past it and move on and start being nicer to Aina so that we can be nicer to him too.

Anyone else wondering how Aini and Imran are faring? LOL. Also, I guess baba ji is not very authentic for Faraz drank the ‘sugar-ed tea’ and Aina the ‘sugar-ed’ milk and both seem to not be very fond of Sajal anymore, ha! What did you all think of these episodes? Would love to hear your thoughts.