Most Emotional Moments From Ehd-e-Wafa

Ehd-e-Wafa is the most popular Pakistani drama on television right now. Ehd-e-Wafa’s popularity has grown in the past few weeks. The drama essentially revolves around four friends and their journeys. Ehd-e-Wafa has a powerful story and most importantly it is much more than just another entertaining play. Every episode of Ehd-e-Wafa especially in the past few weeks has been filled with positive messages which the viewers seldom get to see in a Pakistani drama. Unlike Alpha Bravo Charlie, Ehd-e-Wafa focuses on more than just the military. It also has strong female leads. The star power and performances of the actors involved have definitely added to the beauty of the drama. The director Saife Hassan and the writer Mustafa Afridi have made this drama with a specific goal in their minds. This drama provides a guiding light to the young, the old and those who want to change their future no matter what backgrounds they come from. The variety of characters and tracks keeps the viewers involved and entertained. Ehd-e-Wafa has been an emotional ride for all those viewers who have been watching this play regularly. Every week, the emotional moments and scenes from Ehd-e-Wafa go viral because they tug at the heartstrings of the viewers.

Here are some of the most emotional moments from all the episodes of Ehd-e-Wafa which have gone on air till now.

Ehd-e-Wafa seemed like a light-hearted drama until the third episode ended with this scene that was extremely emotional. This was the end of an episode but the beginning of something entirely new. Shariq’s sister’s frustration was portrayed superbly by Naeema Butt who made the perfect entry in the drama serial. Wahaj Ali’s performance in this scene also had the viewers undivided attention. This scene was so emotional that the viewers’ interest in this track multiplied instantly after watching it.

When the fourth episode of Ehd-e-Wafa aired in things got too serious, too quickly. This is when the drama started getting more emotional and the comic element subsided for a while. This scene covering the end of the boys’ friendship was emotional and upsetting at the same time. No one was expecting such a reaction from Saad. This scene was also one of the most discussed scenes after the fourth episode aired. The end of SSG shocked everyone and the viewers were left wondering at this moment if these boys will ever go back to being friends.

Right from the moment these two first met both the actors involved breathed life into this beautiful track. This emotional first meeting of Shehryar and his father did not come under the most ideal circumstances. This was the first time that the viewers got to see the serious side of Shehryar’s character and found out what his background was. A boy who was shown having fun in the hostel actually came from a family which was headed by a father who was both intelligent and hardworking. In this first meeting, Shehryar’s father made an impact and this was the perfect start to a relationship which was going to get the viewers emotional again and again.

What started as a comic scene in episode 6 of Ehd-e-Wafa quickly turned in to a emotional one. Gulzar was introduced as a young cadet with a background which was very different from the rest of the cadets which is why he was scared of introducing himself. The fact that everyone else was introducing themselves in English was another problem for someone who could not speak English fluently. Gulzar’s honest introduction and the support of his seniors made this moment and scene viewers’ favorite.

Shariq and his sister’s scenes have always been impactful. The moment Shariq finds out that his sister has secretly entered into a nikkah with the doctor who took bribe for changing the post-mortem report, he lashes out on his older sister. This moment was extremely emotional. The performances in this scene were phenomenal and it was beautifully written.

Haris’ role in the drama was short but it was another emotional track which also showed Saad’s caring, responsible and sensitive side. Haris was upset because his parents had separated and that is when Saad and other officers intervened to give him this beautiful surprise. This entire surprise and the moment he figures out that his parents were back together was such an emotional one. This was definitely one of the most emotional moments in the drama.

The fact that Dua was adopted was kept secret for many weeks. Eventually when Dua found out the truth, her father had already passed away. Dua’s relationship with her father was always one of the most emotional and sweet aspects of the drama. Even after finding out that she was adopted Dua reacted in a mature manner. She knew that her father was scared of telling her the truth therefore she went to his grave to assure him that she never felt that she was not his daughter for a single moment. This scene was extremely emotional.

Saad and His Father

Saad and his father’s relationship has been the most important part of Ehd-e-Wafa throughout. Saad’s father always had huge expectations from him and Saad was always scared of letting his father down. Therefore, this moment when Saad through his hard work eventually proved that he was indeed the son his father could be proud of was definitely an emotional one.

Gulzar entered the drama slightly late but he immediately won the viewers over. When Gulzar started his training as a cadet, he was always unsure whether he will be able to make it or not. The viewers always found themselves rooting for Gulzar and with the help of Saad, he eventually made it with flying colors. This moment when his parents realize just how much he had achieved was so emotional.

When Saad went for his first mission, it was a difficult time for all those people who loved him. By this time, the viewers had completely warmed up to this adorable on-screen couple therefore when Dua remembered the last time she met Saad and was shown getting emotional, the viewers felt her pain and got emotional.

Shehryar’s relationship with his father was always an emotional one. He is also the most level-headed character in the play. Ahmed Ali Akbar’s brilliant acting has added to the charm of this character. When Shehryar gave his parents the big surprise, the pride they felt and the way his father saluted him was one of those moments which actually made many viewers cry.

Episode 21 of Ehd-e-Wafa had so many emotional scenes and Shehryar’s meeting with Firdous Sahib was definitely one such moment which once again made the viewers cry. The brilliant performances by the actors involved and the entire situation was so impactful that the viewers couldn’t stop talking about it. This is the kind of scene which you can watch over and over again.

Saad and his father’s emotional moment when he comes back from his mission was also one which won’t be forgotten for a long time. Ahad Raza Mir and Faraz Yahya have the kind of on screen chemistry which makes all their scenes so easy to connect to. Watching Saad’s father acknowledge and appreciate all that he had achieved was a treat for the viewers. Those expressions and that hug won many hearts.

Saad and Shahzain Make up

This was the moment Ehd-e-Wafa fans had been waiting to watch. No one was sure just how these friends would eventually put their egos aside and go back to being good friends. Saad and Shahzain’s scene was the most emotional moment, one which the viewers had been waiting for.

Did these scenes make you emotional? Share your views in the comments section. 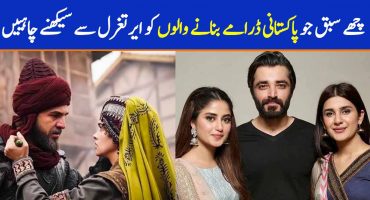