The first 5 minutes of Rehaai’s first episode very powerful. Rehaai started out with Samina Peerzada (Shamim) looking at some jewelry and  having a flashback to a 10-11 year old girl on a swing asking her mother if Bhabi was right and that she really is getting married. That is the first time my heart stopped in that episode and I think it was only minute 4.  That set the track in motion for the remaining episode.  Rehaai is about child marriages (or child molestation in my opinion). It’s the story of Shamim who was married off when she was 10-11 years old. She now has a grown son Vaseem (Noman Ejaz) and a daughter in law Shehnaz (Maria Wasti). Vaseem and Shehnaz have been married for over 5 years yet still don’t have kids and now Vaseem is adamant on marrying again for kids. Vaseem is not only rude, obnoxious, and illiterate; he verbally and physically abuses his wife for not giving him an heir. Medically, they both are apparently fine though. Shamim is shown to be a very loving and supporting mother in law (finally) who keeps telling her son to have patience in Allah’s wisdom.

In the mix are Chacha Inayat (Munawwar Saeed) and his 11-12 year old daughter Kulsum (Yashaal). Chacha Inayat in my opinion is the root of all of Vaseem’s jahalat and badtameezi. He coerces Vaseem into thinking that he needs to marry a much younger girl so she will ‘give him a child every year.’  He even uses himself as an example by telling Vaseem that when When Kulsoom was born he was 56 and Kulsoom’s (unfortunate) mother was only 13. (I’ll discuss my contempt and disgust for this a little later).  Chacha Inayat also coerces Vaseem into agreeing to marry his daughter Kulsoom, to which even Vaseem says no since she is just a child. Later however, he agrees and when he asks his chacha when they can get married, that’s when he drops the 35,000 rupees bomb. Apparently Kulsoom’s disgusting father owes someone thousands of rupees and tells Vaseem in no certain terms will he marry his daughter off without paying off his debt. Basically he is selling his daughter for what was initially 35,000 rupees but settled at 30,000 rupees.  Needless to say Shamim is infuriated at her son’s decision, but Vaseem is willing to step over his mother’s dead body to marry Kulsum. Disgusting Chacha sends Vaseem to see Kulsoom where he tells her about their upcoming marriage. When Kulsoom confronts her father he sugar coats it by saying that since she loves her Tai Amma and Shehnaz Apa so much, he’s marrying her off to ‘Vaseem Bhai’ so she can live with them forever. Poor child has no idea about the physical and emotional torture she is about to be put through and is just happy that she will be living with Tai Ammi.  First episode ends there.

As I said above, the first episode was really powerful, yet at the same time extremely disturbing. Acting wise, you can’t get better than Samina Peerzada. She needs no words to describe her acting and neither does Munawar Saeed.  Noman Ejaz is very effective as the jaahil and badtameez person. Maria Wasti was ok…her role in the first episode (in my opinion) was definitely needed but it wasn’t anything extraordinary. I really liked how for the first time the mother in law was shown in a positive and supporting role towards a bahu who hasn’t been able to conceive yet. At the same time though, Shamim seemed too refined for that role. Her mannerisms and dialogue delivery was not in sync with the environment the characters live in. In fact until I saw Chacha Inayat, I wondered how her son could end up like that.  But then when uses terms like “hud-har***m” in front of an 11-12 year old, and that too to describe that child’s father, you are back in that environment.  Mehreen Jabbar’s direction was brilliant…especially the swing and the doll scenes.

Now, let’s acknowledge the elephant in the room…child molestation/marriages.  I absolutely think this is an issue that strongly needs to be dealt with and taken care of.  I wanted to vomit when Chacha Inayat was selling his daughter to Vaseem…it was absolutely abhorring. However, I don’t think it should have been so in your face.  Even though this was only the first episode and really not too much was shown, even what was shown was absolutely not appropriate for prime time. There should be an adult censor system for such dramas.  More than that, I am actually scared for the child star Yashal’s real life. I can’t imagine or understand how and why her parents let her do this role. The society that we live in has shown repeatedly what can happen when you have such suggestive roles. I can’t imagine what this girl went through in school or public.  I think had ‘Team Rehaai’ wanted to really talk about such injustice, it could have been done in much more subdued way and should have.  At such points people really should ask themselves if they would let their own kids do such roles. If the answer is no, then that should be the answer for every child and they should find a different way to discuss this problem. I was not at all comfortable watching this. Especially the scene where Kulsoom is bringing Chai to “Vaseem Bhai” and is completely oblivious of the fact that she is now looked upon as a prospect…absolutely sickening! I honestly don’t know what HUM TV is trying to do with showing such ‘in your face’ scenes and unfortunately it has become a trend in all of Momaina Duraid’s home productions.  They are becoming too bold and too open while hiding behind the terms ‘Social injustice.’ 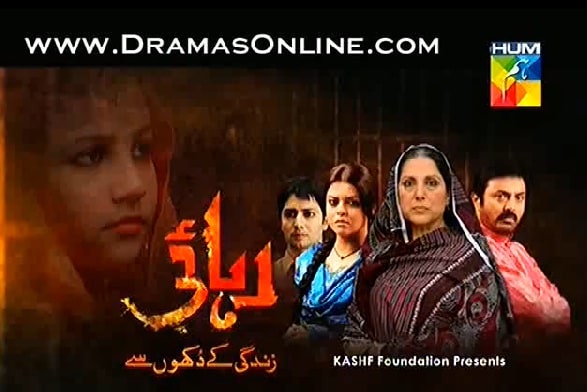