Ohkay so, the writing of Radain Shah, the direction of Ahmad Bhatti & production of iDream Entertainment; Shehnai commenced last night with a double episode & I feel this was the best start a drama with such a huge cast could have. I feel it was a great idea that they decided to give a thorough introduction to almost all the characters. After watching Shehnai, I can already say that the viewers already have an idea of what’s in store for them & it definitely is going to be an interesting watch. Although the writing & execution was entirely different, I definitely got Aangan vibes because its story was also related to a big family & their set of problems.

The story has kickstarted with an eventful & thrilling engagement of Bakht (Ramsha Khan) & Meerab (Affan Waheed). The fun part is, they both are not really happy with the idea of this marriage because they both are in love with someone else. Bakht loves Hunain (Hammad Shoaib) & Meerab loves Samreen (Maham Amir). I’m sure it was intentional but just a few moments both Bakht & Meerab had with Hunain & Samreen were self-explanatory that they both haven’t found their Mr. & Ms. Right yet. Samreen & Hunain both have a very different temperament & over the course of time, Bakht & Meerab will realize how they were just pressured into feeling that they were in love, which they actually were not. 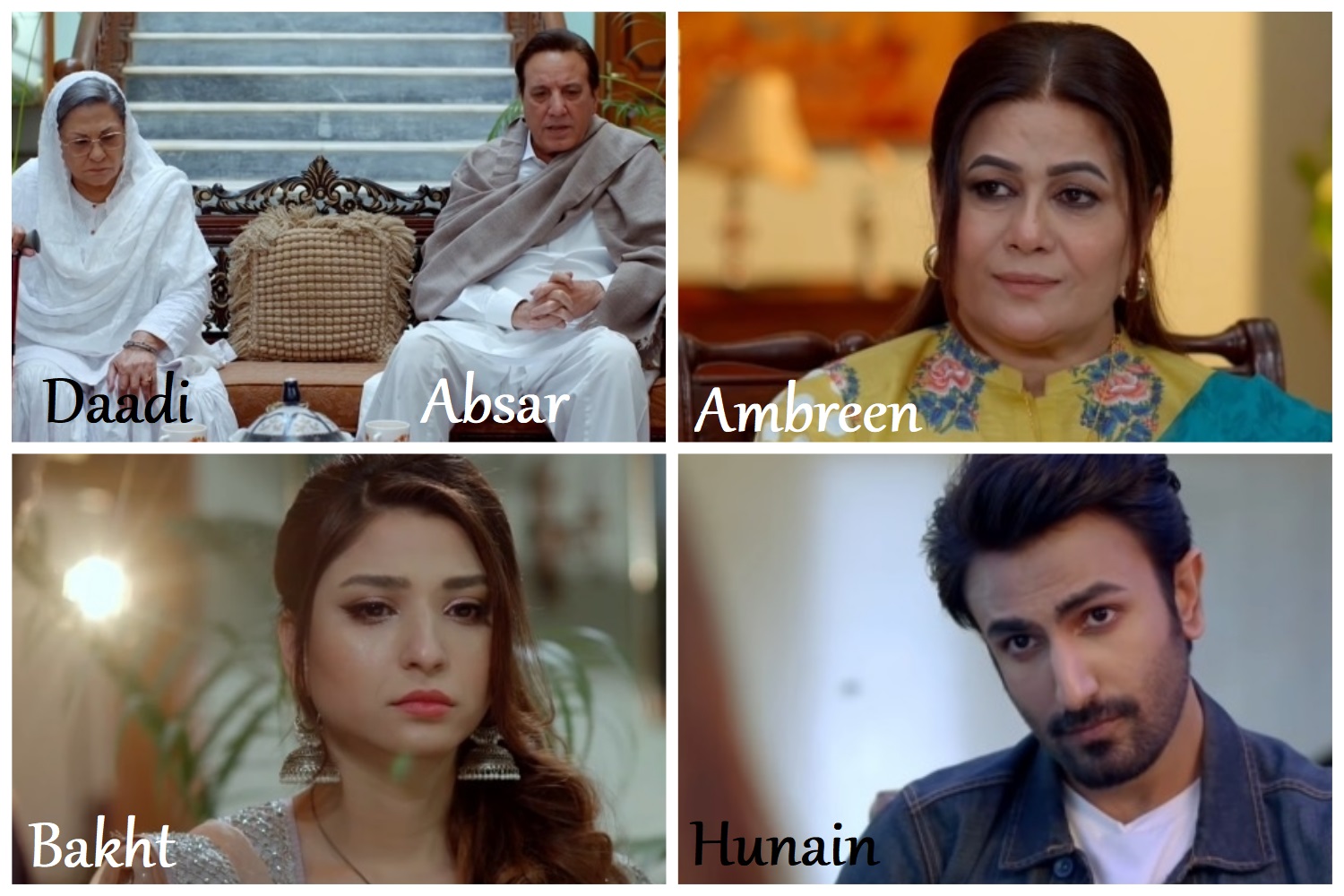 Bakht is a daughter of Absar (Javed Sheikh) & Ambreen (Nida Mumtaz). She happens to be the only child. They live in a joint family system with Bakht’s Daadi (Samina Ahmed), uncle Azhar (Behroz Sabzwari), his wife Maliha (Zayyab Qayyum) & their daughter Iffat (Anosha Ali). In general, Absar is the head of the family & he is the one who takes all the decisions but Maliha definitely has an issue with the fact that her husband Azhar is a bit too submissive & doesn’t really think about breaking free from the joint family system. 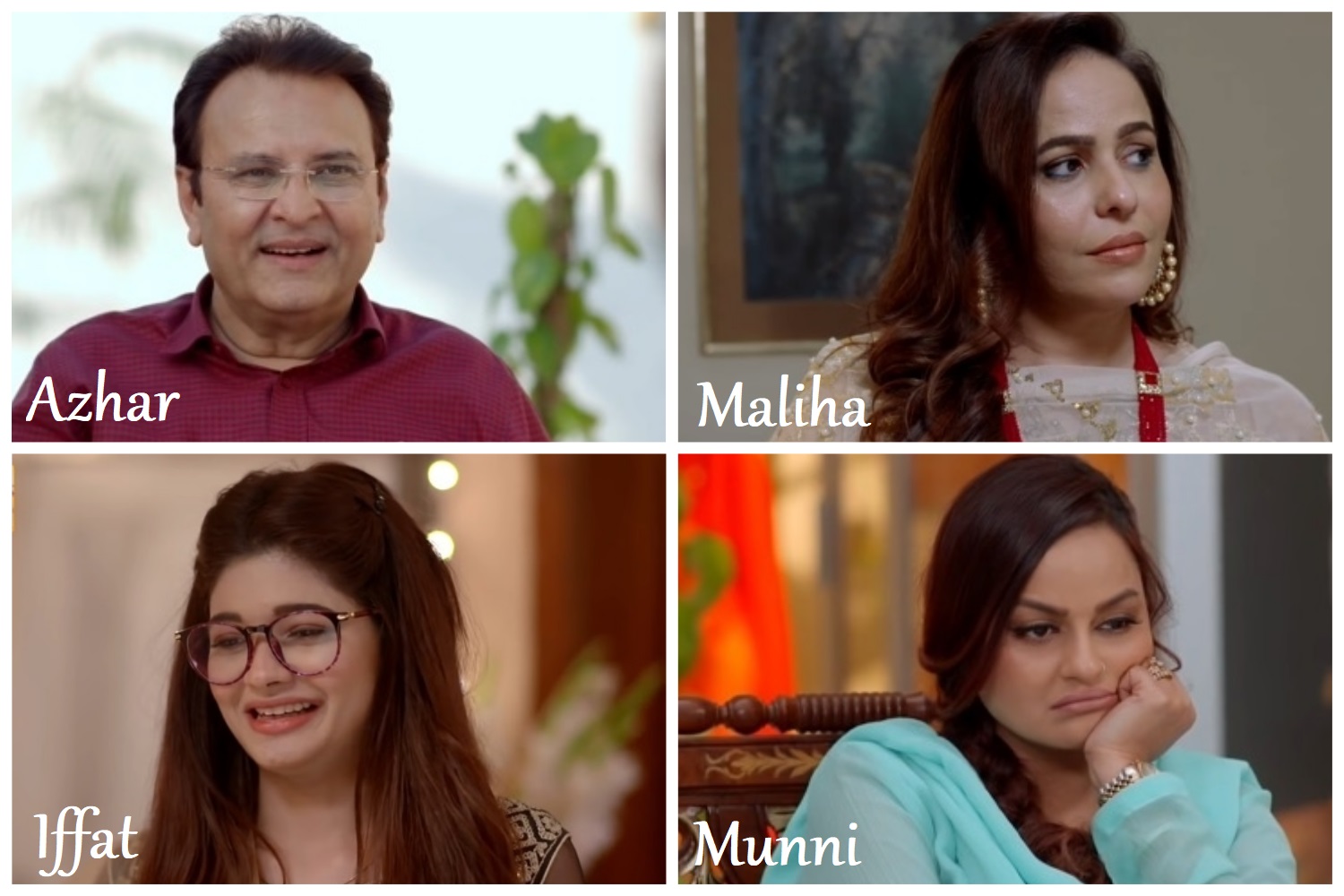 Meerab is the son of Mr. & Mrs. Zubair (Shehryar Zaidi & Nabila Khan). He has a sister Beena (Anam Tanveer) who is married & has a son named Taimoor. Meerab is a Chartered Accountant & has just returned from London. Zubair & Absar have been friends for decades & this is exactly why they feel the decision they have taken for their children Bakht & Meerab is just perfect. Meerab also has a cousin who accompanies him everywhere, he is Rafay (Arsalan Faisal) & it seems he cleans up after all the messes that Meerab makes. Meerab is the emotional one whereas Rafay happens to be the practical & analytical one who likes to find solutions to problems. 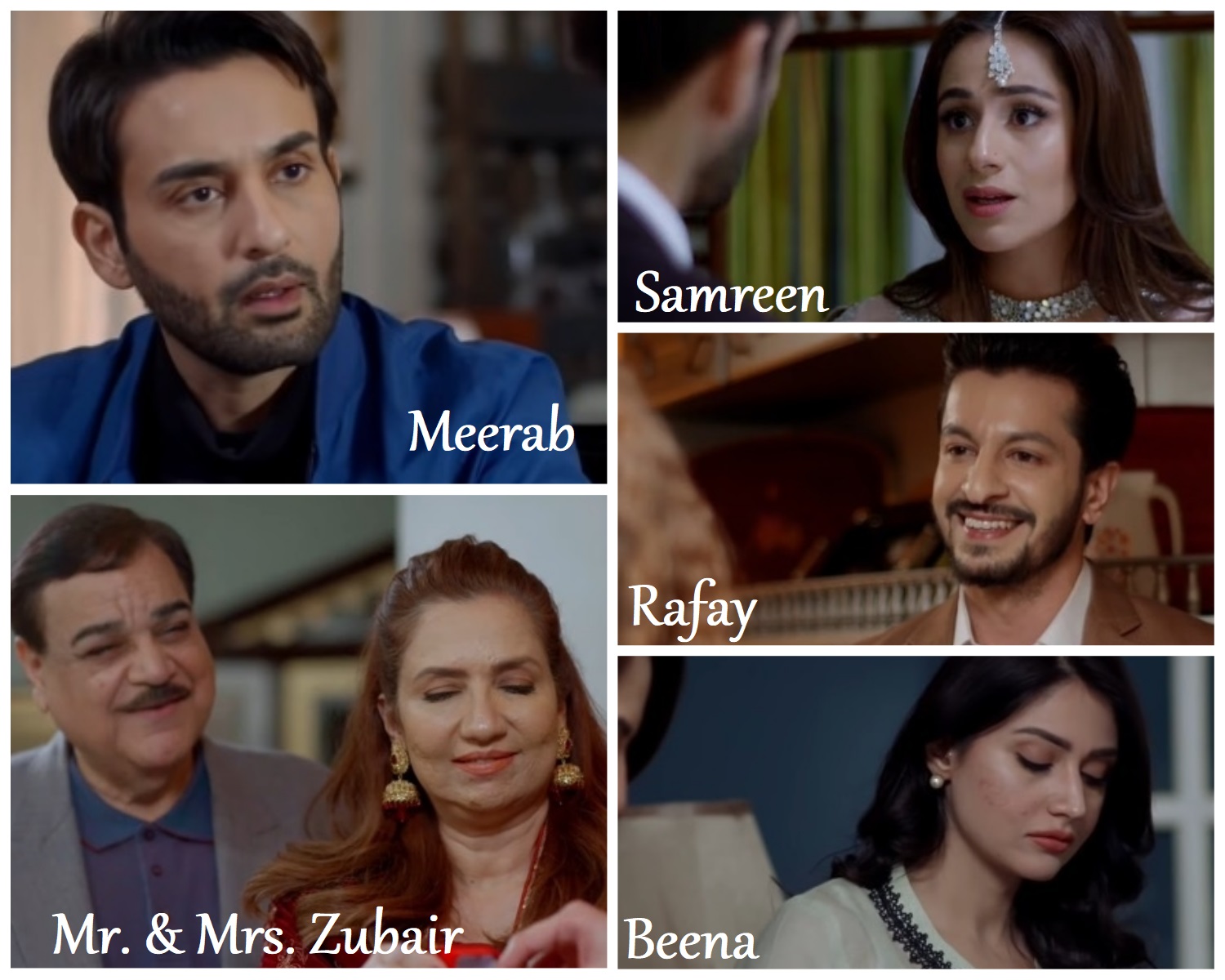 Bakht has been stalling her marriage & she has given the impression to her family that the guys who come for her proposal end up rejecting her but in fact, it is Bakht who shoos them away because she is involved with Hunain & he has been asking her to buy him some time. Hunain has yet to introduce Bakht to his family & Bakht already thinks he is going to send his family for her proposal which is highly unlikely. Meerab is more or less in the same situation too because he has also not introduced his ladylove to his family. The kind of introduction Samreen got, it was obvious that she guilt-trips & manipulates Meerab. More than love, Meerab feels obliged to be the way Samreen wants him to be. Meerab is a kind-hearted person who finds it really hard to say no & this is exactly why he landed himself in this situation where he just could not tell his parents that liking her picture did not mean he approved of the idea of getting married to Bakht.

Absar has two sisters, Tooba & Munni. Munni (Javeria Abbasi) is a divorcee & lives with her family. Tooba (Salma Hassan) is married to Qifayat (Saleem Mairaj) & has two children Beenish (Nida Hussain) & Ahsan (Umar Alam). Being sisters, Munni & Tooba are always on the same page & kind of have teamed up against their bhabhis. The most interesting equation that they have is with Maliha. Although they may not like her because at times she does things that are of their interest too, they team up with her as well. Throughout the episode, it was interesting to note that in this family, I was getting to see all sorts of people; the troublemakers, the gossip mongers, the conspiracy theorists, the opportunists, the well-wishers & then the sane ones who just saw things as they were. The writer definitely sketched a perfect picture of what a joint family system mostly consists of, on the surface they may seem like one big happy family but within they have some family politics which ends up being a bone of contention between all of them. 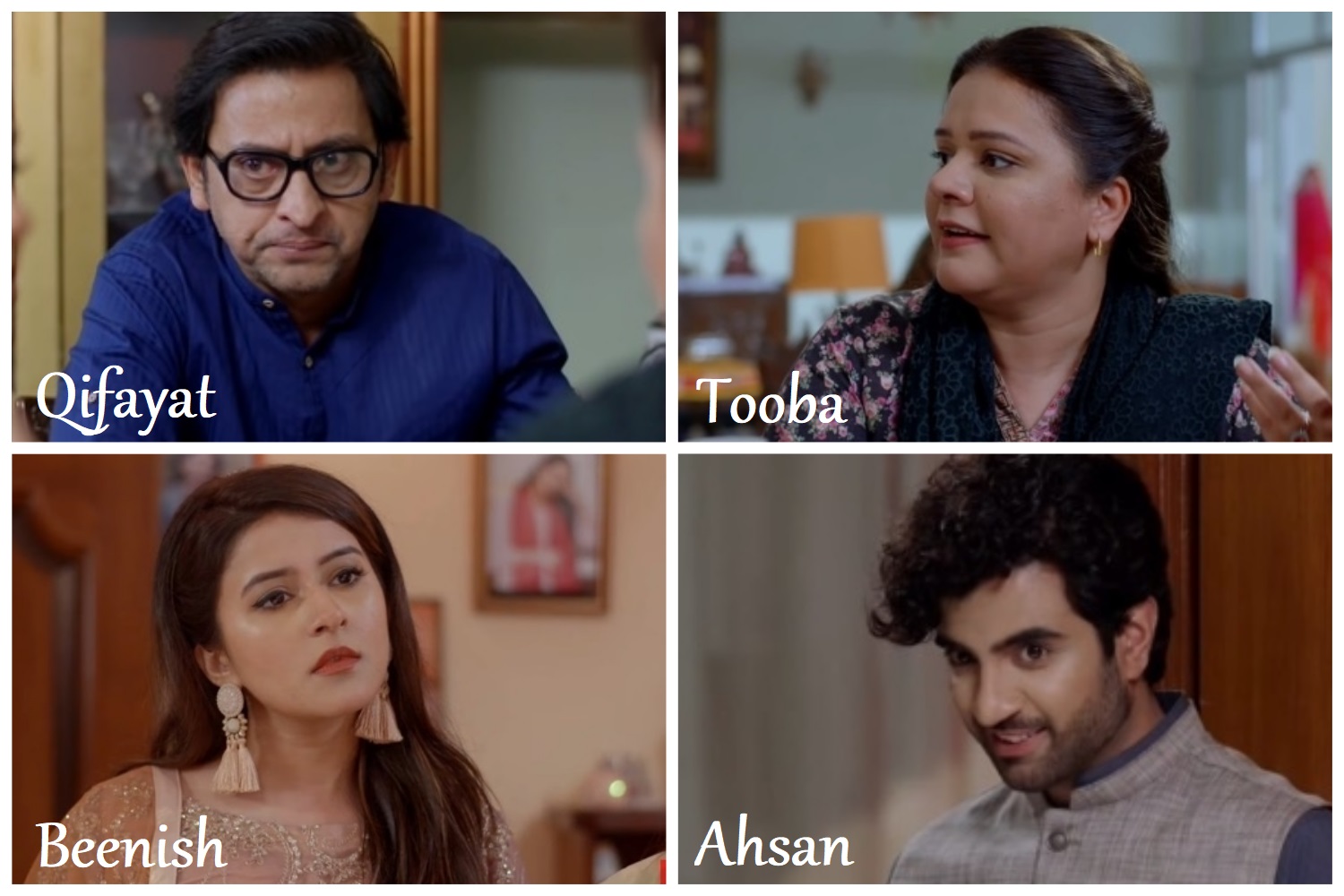 It was interesting to see that despite the politics in the family, both Bakht & Iffat were like sisters & friends who did not keep any secrets from one another. Only because it was Bakht’s engagement, Ambreen’s sister Saiqa (Naima Khan) came along with her daughter (Maryam Noor). Once again, the equation they had with Ambreen & Bakht was quite obvious, being sisters to each other, they continued to be supportive throughout the chaos that ensued after Meerab left & did not think about adding fuel to the fire like Ambreen’s in-laws did.

I will definitely say I had a great time watching the introductory episodes of Shehnai. Although this wasn’t something new but I liked the kind of execution the director chose for this script & despite being something that I have seen before, I found it all refreshing. There was a feeling of realism to everything that was happening & what I liked the most was how much focus there was on each & everyone’s emotions. Be it Ambreen or even Absar, then Bakht & also Meerab. Tooba’s introduction was quite clear too where she had her insecurities & complexes because of which her bitterness was self-explanatory. 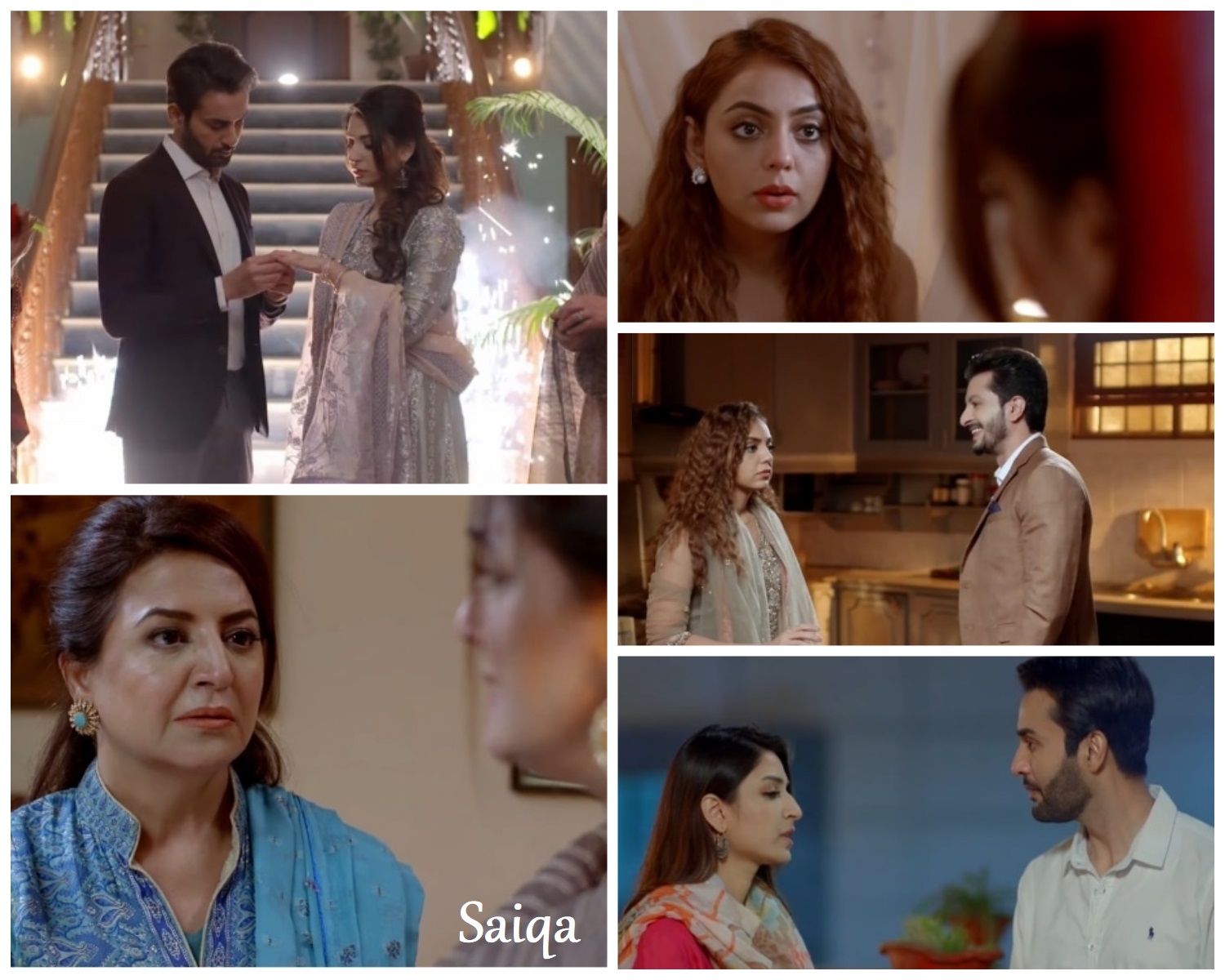 My favorite from the lot were Qifayat & the character played by Maryam Noor. I really wish they had at least introduced her with her name because she really had a strong screen presence & I enjoyed watching her character quite a lot. I am glad Saleem Mairaj chose to play this sort of role & it is simply amazing how he has even embraced this kind of character where he is just simply problematic without even realizing that about himself. Umar Alam also played his part well & I noticed that although he had next to no dialogues, his expressions were just perfect in each & every situation. These supporting characters stood out the most & I am already liking the second lead track that we’ll see evolving between Maryam Noor’s character & Rafay. Rafay already seems interested in nurturing it & she was just not having it. The short exchange of certain expressions between the two made me giggle because it was simply cute.

Ramsha Khan & Affan Waheed played their parts perfectly. It won’t be wrong to say that Bakht reminded me a lot of Samiya from Ghisi Piti Mohabbat but it kind of feels nice to know that she will find her happily-ever-after in Shehnai. Ramsha Khan is absolutely effortless in the portrayal of these kinds of characters. Affan Waheed gave Meerab’s character a very nice personality & what I liked the most about him was how amidst the chaos, he was trying to keep his act together. Bakht got to have an outburst but Meerab didn’t even have that luxury. I must say every time both Affan & Ramsha shared the screen together, their chemistry was amazing. I am glad we’re getting to see such a fresh pair & they both definitely look great together. All the actors performed beautifully & right from the beginning, their chemistry as a family was established & it just worked. I must say the production value is great & I couldn’t help notice how beautiful the interiors were. All the ladies looked beautiful & I loved their styling & outfits. Javeria Abbasi looked gorgeous & so did everyone else. Although Ramsha Khan was in the limelight, Maryam Noor caught the attention immediately & it was amazing seeing how effortless she was as well.

I wish there was a bit more clarity on Meerab’s name & its pronunciation. In the beginning, I heard Absar calling him Mehrab, which actually made sense because Bakht’s name is also related to luck, therefore Mehrab is another sign which people usually relate to being lucky. In promos, his name was written as Meerab but throughout the episode, the pronunciation kept on changing. I wonder if it is Mehrab or Meerab? Also if anyone knows the name of Maryam Noor’s character then please do let me know. Salma Hassan was quite interesting as Tooba but Saleem Mairaj stole the show with the subtlety in his body language. Zainab Qayyum, Javeria Abbasi, Javed Sheikh, Samina Ahmed, Nida Mumtaz & the rest of the cast played their parts really well too. Some of the dialogues were quite amusing & the overall direction was great. I am not usually a fan of background music & sound effects but this part was well taken care of in Shehnai where I found myself enjoying the background score quite a lot. I can safely say that after watching the first episode, Shehnai definitely is the kind of drama that I’ll be looking forward to every week. Please share your thoughts about the introductory episodes of Shehnai.