Makeup is an essential part of an actor’s job and career. It takes them years of experience, trials and errors to get to the point where they truly understand what looks good on them and what sort of makeup they can and should carry on-screen. Over the years, Pakistani actresses have started relying on very little makeup and they usually go for natural looking makeup, it not only accentuates their natural beauty, but makes their characters look real and relatable.

In the past, actors used to rely on very heavy makeup, which often served as a major distraction for the viewers because they failed to relate to such a made-up character. Then came a time when the actors started understanding the true nature of their job, especially while playing the characters which portrayed the real-life struggles of people. This allowed the actors a shift in their approach towards their characters. In real lives too, celebrities have started wearing very natural looking makeup because it is not only easy to achieve but it is very much in trend to avoid caked up overly glamorous faces in day to day life. This is how they get to look super glamorous during the award functions because the heavy and glamorous looks are saved for the special occasions.

Let’s take a look at the signature makeup looks of top 5 Pakistani actresses:

Ayeza Khan has experimented a lot over the years and has now realized what looks good on her. One of the most important aspects in Ayeza Khan’s signature makeup look is her bronzing and contouring steps. Whenever people hear the word contouring, they are usually reminded of the harsh lines however Ayeza Khan’s makeup is a perfect example of how contouring and bronzing can also look absolutely natural. Ayeza Khan has a structural face, this is why she accentuates it even more using warm shades to bring dimension to her face.

Ayeza Khan usually wears a thin layer of foundation but then the products on top of that very fine layer help her in achieving her signature makeup look. Ayeza Khan also does not skip doing her eyebrows. Her eyebrows are filled lightly using feather stroke technique but they are very much defined and frame her face perfectly. Ayeza does wear blush but goes light handed on it, however one makeup product that she does not hold back on is the highlighter. Ayeza Khan’s entire face makeup is very much based on contouring and highlighting technique, which accentuates the high points of her face and give her a structured look. She usually prefers wearing icicle almost frosty white cool toned highlighters.

She is very much into wearing natural shades of lipsticks on a daily basis but there are some rare occasions when she wears brighter and bolder lipsticks colors like plums, berry pinks and reds and carries them nicely too. Ayeza Khan’s eye makeup is very simple which is usually achieved using cool toned brown eyeshadows that are properly blended – enough to give her eyes some crease and definition. She drags the eyeshades under her eyes, which make her eyes appear bigger. She wears a single coat of mascara and does not make her eyelashes too prominent. Ayeza Khan prefers minimal attention on her eyes, this is why she usually keeps the eye makeup very simple and light. She does not wear a defined eyeliner and usually prefers a blended and diffused liner look which is achieved using pencil liners.

Alizeh Shah was known for wearing a lot of makeup in her dramas but over the time, she has understood what looks better on camera and how much makeup is suitable for the characters that she is playing. Alizeh Shah’s signature makeup is all about the sun-kissed look. She does wear a proper layer of foundation which gives her enough coverage. She then goes heavy handed on bronzer and highlighter, which perfectly bring dimension to her face as well as uplift the high points of her face. Alizeh Shah likes wearing a lot of highlighter and she carries it perfectly as well.

Alizeh naturally has a perfect eyebrow shape, therefore she fills it using brown shades, which give her a defined eyebrows without making them look too harsh. Alizeh always matches the eyebrows with the current hair color of hers, which is the right way to make it work. Alizeh also wears a lot of blush, usually pinkier and peachy toned which gives her a lot more youthful and fresh look. Alizeh defines her eyes using warm eye shadows and usually goes for a more cat eye effect with her crease properly defined and extended. At times she prefers wearing eyeliner but that is a rarity because she wears mascara which gives her eyes enough definition. Alizeh wears a variety of lipstick shades and at times only wears lip tints which give her lips a hint of color.

Sajal Aly is one of those few actors who do not mind wearing no makeup when its the demand of the character or certain scene. She usually also does not wear a lot of makeup in the dramas and her signature makeup look is all about enhancing her beautiful features with the help of minimal makeup products. Her signature makeup look can be defined as a natural daytime makeup look.

Sajal wears a decent layer of foundation which gives her face enough coverage and gets the canvas ready for the rest of the makeup products to glide on. Sajal Aly loves a thin eyeliner which defines her eyes. In almost all of her dramas, she always wears a thin eyeliner with a small wing to accentuate the beautiful shape of her eyes. She wears a few coats of mascara to give her eyelashes the volume and length, this step also helps up in opening her eyes up. Sajal’s main focus is always on the eyes, this is why brow definition is also a major part of her signature makeup look. Sajal Aly is very much into pinkier cheeks and lips. She is always seen wearing tints which give her cheeks a hint of color and a similar shade is seen on her lips. Sajal carries pinks really well, this is why most of her lipsticks are pink as well. 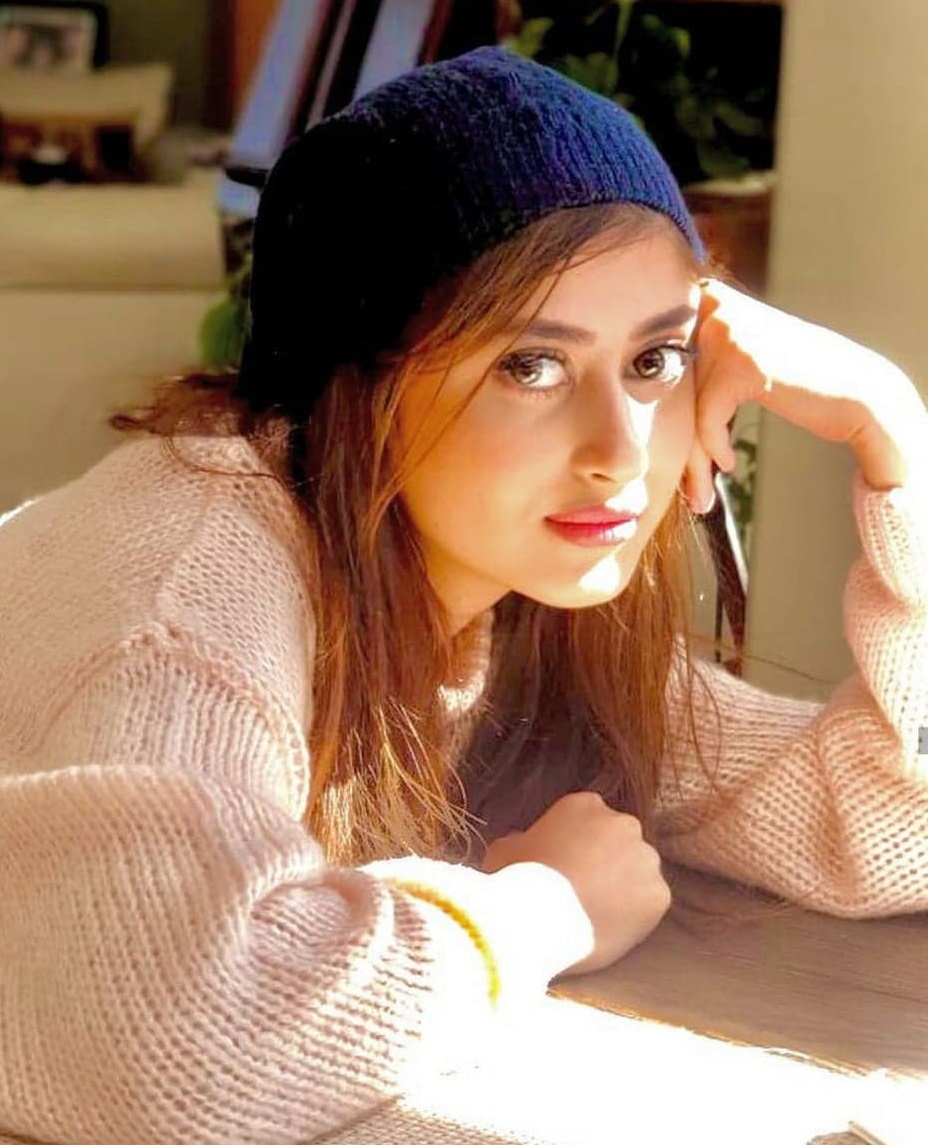 Iqra Aziz is very comfortable in her skin, this is why her social media feed is filled with pictures of her wearing absolutely no makeup. As wearing makeup is a part of Iqra Aziz’s job and career, she has come up with a certain look which she carries beautifully and is enough to accentuate her beauty in a number of steps.

On a daily basis, Iqra wears little foundation, she naturally has a clear skin, this is why her face does not require a lot of coverage. She is very particular about the perfectly shaped eyebrows, this is why she makes sure that her eyebrows are properly defined and filled in. Iqra also uses concealer to clean up the edges which add more sharpness to her eyebrows. She keeps on changing the eyebrow shape because she naturally has thin eyebrows so she gets the margin to come up with the desired shape. Iqra loves highlighters, this is why she goes heavy handed on highlighters to get the glowy look that she likes.

Iqra Aziz’s signature makeup look includes properly lined eyes. She defines her eye shape using eyeliners and prefers wearing it in different thicknesses because either way, she carries it really well. She defines her crease with warm brown eyeshadows and does not forget to add different shimmery or matte shades on her eyelids. Another makeup product that is a must in her makeup routine is the cheek and lip tint. She is always seen wearing it in her dramas or in her regular pictures on Instagram, it is enough to give her face a hint of color and adds freshness to her makeup look. Bolder brows, properly layered foundation and rosy lips and cheeks is what Iqra’s signature makeup look is all about.

Sana Javed has also changed her preferences and now goes for a very minimal makeup look, which is all about the fresh and glowy skin. Sana Javed wears a thin layer of foundation and then adds a lot of highlighter which gives her the glow-from-within look. Her signature makeup is all about glowy and glass-like skin. She does not really wear a lot of bronzer but only brings in dimension to her face with the help of blush which is enough for her. Sana has the kind of complexion where a little makeup can look a lot more, this is why she does not go heavy handed on the makeup.

Defined eyebrows and a touch of color on the eyes is how Sana likes her eye makeup to be. She wears different shimmery and even matte shades on her eyelids and defines her crease using browns. She also wears natural and nude shades of lipsticks, which often match the shades of her blush on. It is a rarity that Sana wears eyeliner and when she does, she makes sure it is a very thin line which does not overpower the rest of her eye makeup look. Sana Javed’s signature makeup look can be defined as a day-time fresh looking glam.

This concludes the list of how these top actresses like to wear their makeup. Which one of these makeup looks do you prefer? Feel free to share your opinion in the comment section below.