Ohkay so, this episode of Thora Sa Aasman was quite good & interesting to watch. I must say, the pace of the drama is working for me the most because just when we were getting a little bored with the coverage of one track, they introduced in a lot of new faces & the scenario of the story changed completely. I am definitely looking forward to all the tracks & their stories that have yet to unravel.

So, Baqir Sherazi sent a proposal for Haroon Kamal through Sabiha, where he suggested Haroon to divorce Shahista otherwise Baqir will make sure that Haroon faces a loss in his business. As hideous as the idea sounded, what I liked the most about the entire situation was that it made the ruthless & emotionally absent Haroon Kamal vulnerable for a moment. Haroon’s arrogance & social standing actually made him believe that he had control over everything & that everything will always fall in its place for him every single time but it was good to see that a man, far more powerful than him made Haroon reflect on himself & reminded him of the fact that he was no different to any other regular human being & he was just as weak as anyone can be.

It was for the first time that we saw the reality of a liberal Haroon Kamal who, by the circumstances, was forced to doubt his wife & her loyalty towards him. Haroon actually posed to be quite a broad minded person who didn’t mind seeing his wife being friends with men who had more power & who could help him in his business in any way possible, but when things got out of control, he conveniently blamed Shahista for giving an edge to Baqir due to which he believed that he could get her in a barter bargain. This was also a slap on Haroon Kamal’s face & was something that bruised his ego because Baqir in just a second made him realize about the sort of a person Haroon was & how Baqir saw him as just an opportunist who could be lured easily using money as a bait. Haroon never really imagined that people could see him as such a weak person having no substance at all.

Another face that we saw of Haroon Kamal was a depiction of his double standards. Shahista is expecting their baby & just because the time span & timeline of their relation could raise questions against the baby, Haroon didn’t mind telling her straight away that she had to put an end to this ray of hope in her life. This was something that took Shahista in her past where it looked like Haroon has taken away her baby from her previously too. Sadly, Shahista fell into this trap of love with a wrong person because he is the one who demands & Shahista is the one who has to compromise every single time. Haroon is quite a superficial person who believes in fake standards because at one hand, he can not see people questioning his sister & her family, but on the other, he doesn’t mind having an affair with Zarka, getting married to her stealthily & then also doesn’t mind depriving his wife of all those rights that she is entitled to. Also, the way Shahista & Haroon opted for court marriage highlights his double standards a bit more where he conveniently fooled someone’s daughter & forced her to take such a step that only became an embarrassment for her parents & that is why her parents have till date not forgiven her for what she did!

Well, Baqir Shirazi along with Sabiha Judoon died in a car accident & I am kind of relieved that we’re past this triangle that wasn’t sparking much interest, but I am interested to see what life has in store for Shahista & Haroon!!!

Well, we got introduced to the families of two brothers Mansoor & Masood. Masood’s (Anwar Iqbal) family consists of his wife & his two sons Talha (Umair Laghari) & Osama & Mansoor’s (Babar Ali) family consists of his wife Muneeza (Lubna Aslam), his daughters & son; Ambar (Sahar Afzal), Safiya (Aleezay Tahir) & Roshaan. Ambar & Talha, Safiya & Osama are engaged to be married. In this episode we got introduced to their characters in a very appropriate manner & I am definitely looking forward to their stories. 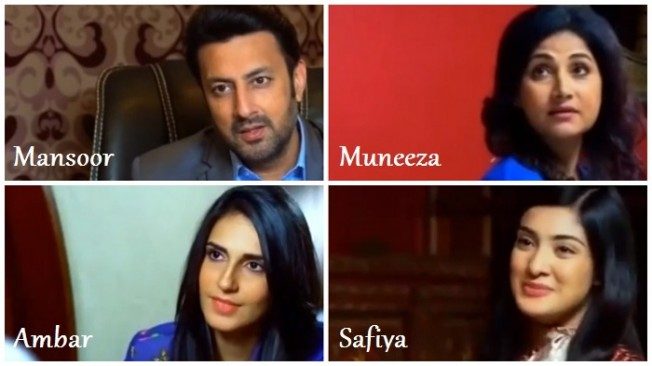 Ambar is a daddy’s girl & in the very first encounter she can come across as someone who is a spoiled child who believes in having everything her way but as you get to know her, she also has kindness in her heart that her mother most certainly doesn’t approve of & this is something that doesn’t make her character black & white, it’s like she has different shades, some of which can be appreciated & some of them can make her look a little unreasonable. It looks like Ambar is her father’s favorite, that is why she makes the most of his kindness & for that reason, Mansoor can never deny any of her demands. Ambar has not only been spoiled by her father, but even her fiancé Talha believes in doing everything that she says. Talha loves & respects her a lot & they both believe that the factor of trust is what has kept their relationship strong over the years.

Mansoor’s wife Muneeza is enjoying her luxurious life & she doesn’t realize that all the comforts that she has can make people around her a little envious of her lifestyle. Muneeza also doesn’t mind flaunting how her husband Mansoor has given her the control over the household & she makes the most of it. Muneeza seems just as spoiled as Ambar & she doesn’t look like someone who believes in making compromises, that is why just when Ambar & Talha had a tiff, Muneeza held Talha responsible for spoiling Ambar’s mood in stead of making her daughter understand that she shouldn’t be so rigid. The second daughter of the family; Safiya in comparison to Ambar seems a lot more mature & understanding. It looks like Osama likes Safiya a lot too & being her fiance, wants to spend time with her but Safiya doesn’t take advantage of the liberty her parents have given to their children because she is far more rooted & simple. 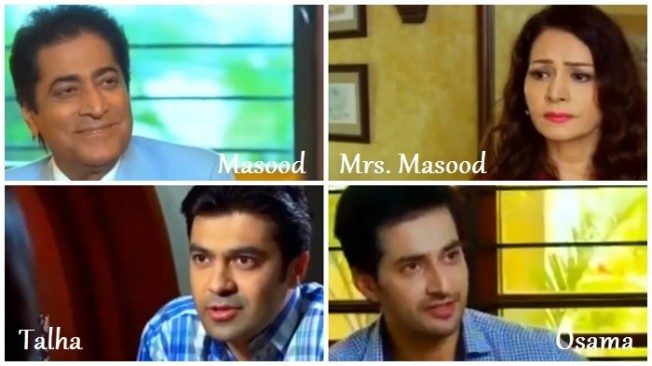 Masood’s wife & Talha’s mother finds it a little odd how much freedom her daughter-in-law to-be has & how Ambar has her son wrapped around her finger. She also feels the envy when it comes to the life Muneeza is living as she finds her husband far more accommodating & understanding in comparison to her husband Masood. It seems that Muneeza or Mansoor & Masood have an elder sister & she is also quite interested in Ambar & Safiya & for the obvious reasons because she knows that Ambar comes from a very sound background & she tells Muneeza that at least she should have accepted her son’s proposal for one of her daughters. Apa also has a daughter who she seems a little worried about too as she wants her to get married in to a family that has a financial stability.

It looks like Haroon Kamal has started exploring more business options & he is doing collaborations with well-established companies & for that reason, Mansoor believes that he should propose a venture deal to Haroon Kamal because he know that the association of his name with their family business will not only bring a lot of advantages but will help them in raising their graph too. Things are definitely going to get more interesting & I can’t wait to see more.

Overall, this episode was quite interesting & I hope that the pace of the drama stays the same. I am glad that this story has a lot of characters & a lot of tracks that is why things don’t become slow at all because there’s so much to explore that the change in the scene brings a change of track & perspective with it. I will say that the director has handled the script quite well & all the actors are doing a fairly decent job but I do find their timing a little off which makes the flow of the scene a little choppy, it looks like that the actors don’t have that understanding & because of that we see some awkward pauses in between their conversations. Anyways, as far as the story is concerned, I feel that a little tweaking has been done but for that reason, I find this drama a lot more engaging because these changes not only come as a surprise but leave you guessing about the scenarios at times too, which is a bonus. Please share your thoughts about this episode of Thora Sa Aasman. 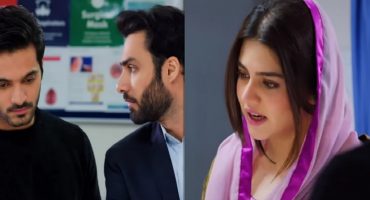