This was one of my favorite episodes of Zun Mureed, it was brilliantly penned down and executed flawlessly. There wasn’t a single unnecessary scene in this episode and it had the perfect flow. All the actors gave brilliant performances which definitely contributed to the overall impact every conversation had. Tonight’s episode opened with Tabbasum having a conversation with her sister Fari about how she too had contributed to the house from which she was forced to leave and doesn’t have the option of going back to. I absolutely loved how the writer showed that a woman can actually be homeless even when she has two houses – one which she help buy and build up and the other one which she also has a share in! The reason for this is that both these houses are not in her name. The parents most often trust their sons enough that they leave matters in their hands and when a woman is happily married she too is hardly ever given the option of legally owning the house she lives in and the thought never crosses her mind either. When a husband decides to leave his wife or if there are problems in a marriage, it is always the woman who has to leave the house and therefore while the man is well settled in a house he has always lived in, the woman doesn’t only have to deal with the emotional pain but also such practical aspects of the situation. Although Sajjad’s house too is a mess ever since Tabbasum left but the fact is that he couldn’t care less who is running the house and how. The only thing he is focused on right now is to do whatever it takes to repair his bruised ego and convince himself that he didn’t do anything wrong!

Tabbasum’s situation today gave the viewers tons to reflect upon. In order to get her share from her brother, she will have to upset him because thanks to the double standards which exist in our society, when a man takes over her sister or wife’s property no one questions him but if a woman even asks for her share she is instantly an outcast! While the entire burden of making and breaking a house is on a woman’s shoulder, no one is willing to give her the actual ownership of that house!! I loved Fari’s conversation with her college friend in which she suggested that women should have some form of security legally in case of a divorce or a situation similar to that of Tabbasum’s. 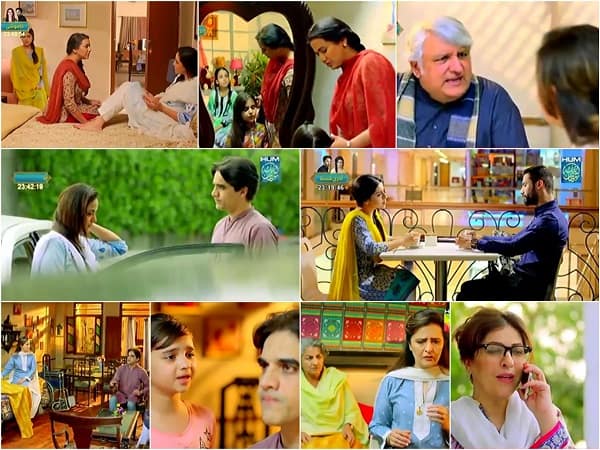 Tabbasum and Sajjad’s scene was brilliantly executed since it was just the two of them, the background score and the overall impact of that scene was remarkable. I also really liked the scene in which Tabbasum’s nieces question their mother about her possible reaction if they were to face a similar situation.

In this episode for the first time the viewers were told the background because of which Sajjad is so “spoiled”! The reasons given were enough to explain Sajjad’s narcissistic personality. He is so self-absorbed that a cricket match he is interested in is more important than anything else which is happening around him – whether it is his mother giving his wife a tough time or his children crying for their mother! The way his sister glorified these negative attributes of his personality also showed why he has such a difficult admitting his mistakes. Hopefully now those viewers who always found it difficult to understand why Sajjad hit Tabbasum, will be able to identify with the entire situation. I cannot praise Omair Rana’s acting enough. He is absolutely brilliant in this role. Hina Bayat, Shamim Hilali, Aisha Gul and Khalid Anum’s performances have also been spot on right from the first episode.

Sidra’s call and her offer couldn’t have come at a better time. I am eagerly looking forward to finding out how this second meeting between Tabbasum and Sidra goes and how in the long run these two characters influence each other. Tabbasum’s bhabhi’s reaction and especially the dialogue about “Dayan bhi jati tu….” was yet another attempt to blame Tabbassum for this recent development as well. She always twists the truth to make Tabbasum feel guilty. Her character represents all those people in our society who feel the need to intervene in everyone’s affairs and take no responsibility for the outcome.

Zun Mureed is going strong and manages to deliver every week. It is my favorite drama nowadays which never disappoints. The preview of the next episode was really interesting. Can’t wait to watch the next episode!