Opening Thoughts – So Far So Good:

Ohkay so, this episode of Khud Parast was again interesting however I am not too happy with the way domestic violence is shown in this drama just so casually. This is just the beginning & I am not too sure how much domestic violence will be shown in the episodes ahead but I wish they’d edit those bits out because too much visual representation of something so heinous is not necessary!

Uswa was about to get married & just like any other girl, she was only focusing on herself, her life partner & her dreams. Uswa had no idea that this marriage was going to cost her so much – be it her free-will, her freedom & may be her happiness too. Uswa being a strong-willed girl thought she will overcome everything but she surely has underestimated Bakhtawar & her control on her son!

Uswa’s test of patience began the moment she became Hanan’s bride. It was unfortunate that Uswa misjudged Beenish & thought she was acting like her mum in law’s pet whereas in reality, Beenish was saying everything only to make sure that Uswa doesn’t get treated the way she gets treated in her husband’s home. As an outsider who had no idea about the dynamics of the house, Uswa was naive but right in thinking that Beenish was too submissive & was lecturing her unnecessarily but only time will teach Uswa that she is not any different than Beenish too! 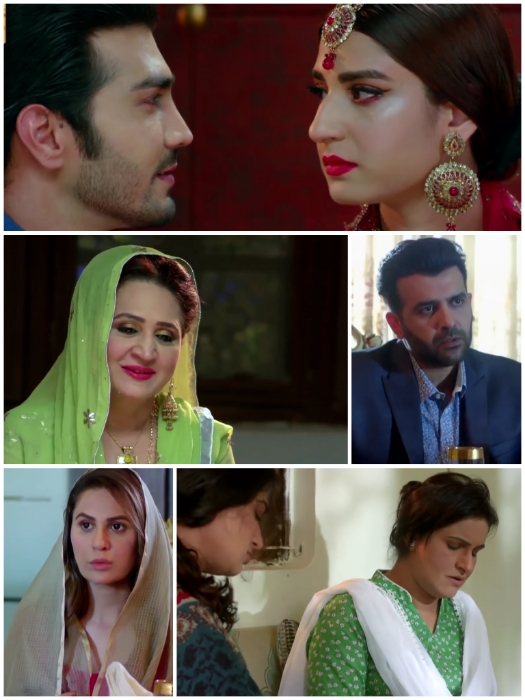 Hanan was happy & he liked Uswa that is why he gifted her a few sets extra behind Bakhtawar’s back but then for someone who has a strong hold on everything, this secret made it to Bakhtawar & she then & there found a way to control Hanan from getting too carried away.

It was interesting to see how Bakhtawar worded her thoughts & subtly told Hanan that she not only knew about what Hanan did behind her back but also let him know what expects from him when it comes to treating his wife. Bakhtawar is a typical woman who has no concern with what her sons do but when it comes to their wives, she doesn’t want them to have an opinion or a voice of their own. Bakhtawar sees her daughters in law as her slaves who she believes are supposed to do what she wants them to!

Uswa’s first meeting with Bakhtawar as a bride was intense & that intensity was a result of some amazing acting done by both Asma Abbas & Ramsha Khan. Bakhtawar just wanted to convey it to Uswa that she shouldn’t fly high & she did it by intimidating her with the idea of Hanan’s extreme stances on things he can’t stand. Bakhtawar got the reaction from Uswa that she was after & more than that, just in that moment, Bakhtawar judged & analysed Uswa that she will turn out to be as submissive as Beenish, which obviously pleased her!

Well, Uswa & Hanan finally came together & left a good first impression on one another but then again, Uswa has no idea what she has gotten into plus Hanan is quite rigid & he expects his wife to change herself completely to fit his demands & fulfil his expectations. That was the first thing that put Uswa off when she found out that Hanan wanted her to change. Obviously, it won’t be easy for Uswa but she will learn that Hanan is a difficult person she has to deal with plus with Bakhtawar’s hold on him, things will be quite hard for Uswa.

Again, in stead of telling Moeez to do right by his wife, Bakhtawar instigated him against Beenish & she got assaulted because of that. Bakhtawar on her own might be a strong woman but she has raised two extremely weak men who have no control on themselves or their emotions. Also, Bakhtawar thinks she is so superior because she gets to rule on the weak & harmless girls but in reality, she also is a shallow woman who is doing all of this to overcome the complexes she has by pleasing her ego.

Overall, it was a good episode of Khud Parast but again, I know this is what the theme of the drama is but I wish the writer hadn’t made the religious characters so black & just so negatively extreme. Yes, as far as showing them being rigid was one thing but to literally make them the villain in every single aspect is not a nice approach, for example Peer Sahab getting upset at Saad’s general question was again such a suggestion. I am tuning to this drama to see Uswa’s journey & if she will succeed in changing things for the better, which I hope turns out to be the case. Asma Abbas has nailed Bakhtwar’s character & all the actors & supporting actors have done a wonderful job too. The direction of Khud Parast is perfect & to the point as well which makes it a good drama to watch. Please share your thoughts about this episode of Khud Parast.