This episode was a complete disaster because of a number of reasons. The story has taken a very typical turn in which the victim who already felt like she needed to protect everyone around her is being pressurized even more into ensuring that she is the one who has to save everyone from further damage! Ayesha’s psychiatrist’s character has never resonated with me because the advices she gives seem to be coming from someone who hasn’t ever been to school! Right from day one she has been telling Ayesha to suppress her feelings, to hide the truth in order to save her marriage and now too she makes it sound like Ayesha is not the victim but someone who committed a huge mistake and now has to do everything she can to cover up!!

I am equally disappointed with the way Ayesha’s character has been turned into that of a woman who fails to see right from wrong. While I understand why someone in her situation would be unable to see herself as the victim since even her own mother refused to see her as one but at the same time it would have been so much better if we saw Ayesha getting strong enough to tell everyone what had happened so that the actual person who should be punished for his wrongdoings feels the heat. Ayesha’s situation looked even worse because we were constantly being shown how well Shahwez was doing in his life. He has a ‘mother’, he has someone who loves him even after knowing what kind of a person he is and is willing to stand by him and now he even has a job which makes it look like he has good prospects of moving on!!

It would have been so much better if the writer showed that Adnan was disappointed and hurt based on the fact that Ayesha did not trust him enough to tell him what had happened earlier or that he felt helpless and frustrated because he could not do anything to undo what had happened to his wife and as a consequence to him too. It is sad to see someone like Adnan who was a perfect husband giving up on his relationship completely like this and also of making plans to have fun in Bangkok because he feels like his wife ‘cheated’ on him!! How could someone like Farah have a brother like Adnan!! There was absolutely no reason to portray Adnan as a typical male because he had all the traits of someone who could rise above the confines of his own selfish concerns and most of all someone like him should have known better than to treat his wife like she cheated on him!

Although I really like Farah’s character but in this episode the repeated references to bhai wanting to get some sleep were annoying!! 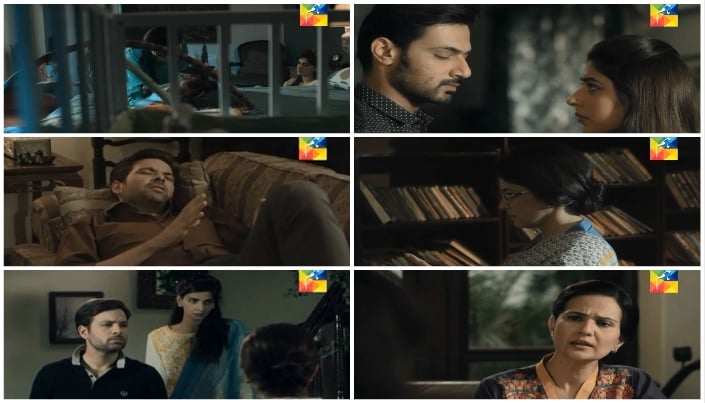 I do acknowledge the fact that in Pakistan most rape victims are made to feel the way Ayesha has been made to feel till now but I must say that if the writer could show the rapist being treated as royalty he could have gone off the usual track when it came to the victim as well. For the first time Shahwez’s presence and Adnan’s absence seemed forced. Adnan’s reaction could have been shown in a much better way if his dialogues were more well-thought-out. Similarly the psychiatrist referring to Sangat as a “gaali” for Ashi was highly uncalled for!! The crime that Shahwez committed is much more than just a gaali for which he is accountable before law and his God! Feeling ‘sorry’ just doesn’t make up for what he did.

Even though I am disappointed with the last 2 episodes I still think this drama can have a decent ending if Ashi realizes that she needs to come out with the truth and Shahwez gets punished for what he did. Shahwez committed a crime and he should be punished for it. He isn’t a school boy who pushed a class fellow therefore he owes much more to his victim than a ‘sorry’!! I must say that the worst turn of events so far has been Salma’s acceptance of Shahwez’s crime.

Did you watch tonight’s episode? Don’t forget to share your thoughts about it.