After watching this show for 7 weeks, I have come to the conclusion that this show is not going to become fast paced. It was very slow in the beginning, but now gradually it is progressing at a steady pace. The story is getting more focused now and this episode mainly revolved around three characters; Haaniyah, Ahmed and Ahad.

The sad part is that Ahad does not feel even a bit guilty, and he actually had the audacity to put the blame on Haaniyah for not waiting for him. The flashback scene was brilliantly executed, and I am glad it was shown as it gave more insight to what kind of a rapport Ahad and Haaniyah shared. I simply loved Haaniyah’s jovial and talkative kind of nature which is a stark contrast from what she has become now; serious and quiet. Ahad has managed to break the spirit of Haaniyah who once used to be full of life.

We also got to know why Haaniyah is so cold towards Ahmed and why she is not able to adjust to the new situation. She thinks that Ahmed has made a huge sacrifice for her and this seems like a huge burden to live with.

‘Mein Thoopi Gaee Hoon Un Per’, this is what Haaniyah said to her mother when she asked the reason behind her cold behavior towards Ahmed. Haaniyah knows that he has married her just to save her and his family’s reputation, and this hurts her self-respect. What she does not know yet is that Ahmed has whole heartedly accepted her and intends to keep her happy. She just needs to give him a chance!

Ahad is now trying to contact Haaniyah so that he can get answers to his questions and blame her for being unfaithful to him. After Haaniyah ignored his calls, he misbehaved with Haaniyah and they had a pretty intense scene. Technically, Haaniyah should be the one blaming him for leaving her but the case was the other way round. Haaniyah has been very calm so far but she lost all control when he accused her, and her reaction was fierce. Ahmed has faith in Ahad that he would respect Haaniyah as she is his wife now, but I do not think Ahad has plans to leave Haaniyah alone anytime soon. Soniya performed well in this scene, though she did go a bit overboard. Shehzaad had the same expression throughout the scene once again; he really needs to work on his expressions. 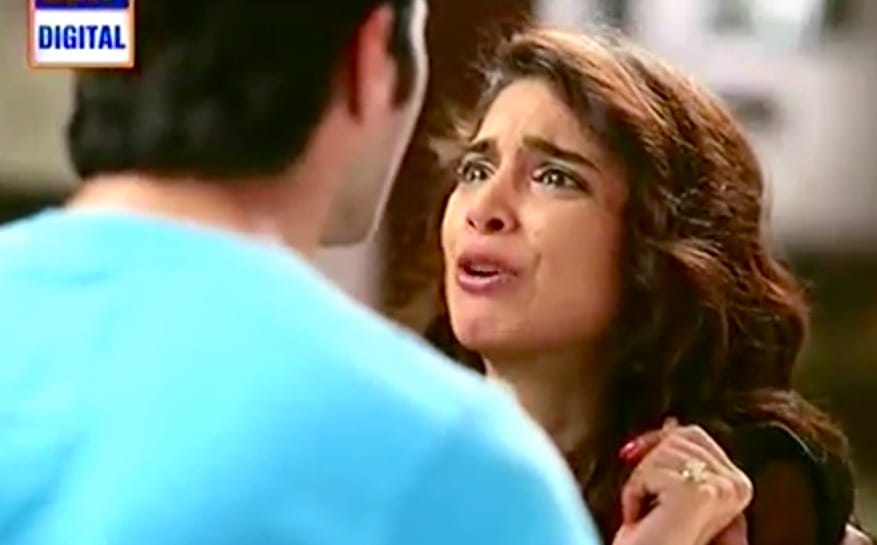 Of course, Samina cannot be left out in any episode and she did get her share of screen space in this episode; though not as much as before. Her haughty attitude is just unbearable! Ahsan really has a lot of patience to withstand her intolerable attitude. Zaheer and Afshah’s scenes are still more bearable and I do not mind watching their scenes. Zaheer and Afshah is an ideal couple who understand each other; they are poles apart from Ahsan and Samina. But I still fail to understand the reason behind the focus on the problems they are facing in their house. Sidetracks can get really annoying at times!

The scene where Ahmed sees Haaniyah hurt and lovingly puts medicine on her wounds was the best scene in the episode for me. For the first time, Haaniyah let him care for her and did not try to keep distance from him. She was moved by his concern for her and could not help but realize what a caring person he is. One brother gives the wound while the other brother heals it! Their chemistry in this scene was just superb!

The story is finally moving forward and we can now see an understanding developing between Ahmed and Haaniyah. I am looking forward to see more of their scenes in the upcoming episodes.

The preview of the next episode shows that Ahad is not ready to leave Haaniyah alone. Let’s see how Haaniyah deals with him!