This week the story of the show progressed a bit further and we got to see some interesting scenes in the episode. The main highlight of the show was Ahad’s return, and how he reacted to the news of Haaniyah’s marriage to Ahmed. I would have preferred if his entry would have been a bit delayed so that we could see some progress in Ahmed and Haaniyah’s relationship before he re-entered their lives.

Ahad returned with no sense of remorse for abandoning Haaniyah one day before the wedding. He got a good tongue lashing from his father along with a slap that he truly deserved, but as expected it had no effect on him. In his opinion, he had the right to make his life’s decision and he did not want to be forced to get married when he was not ready. 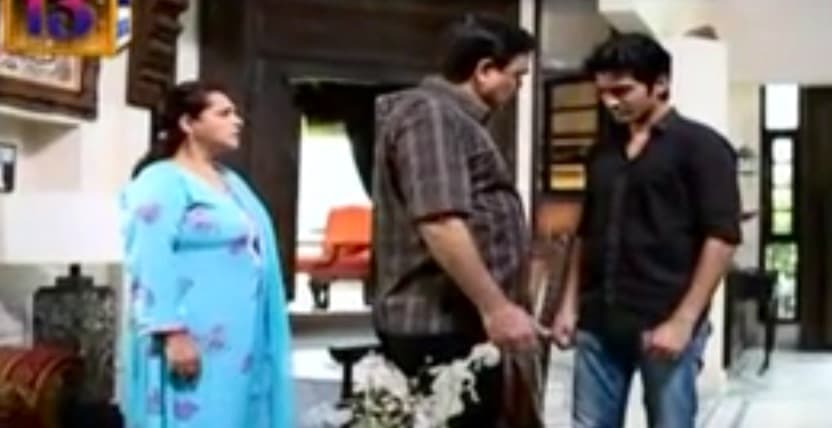 Haaniyah and Ahmed are now in an extremely awkward situation and Haaniyah is still not able to accept that Ahmed is a part of her life now. She pushes him back whenever he tries to make the situation less awkward between them. The situation is not easy for Ahmed to accept either, but he is trying his best to come to terms with it.

Haaniyah is trying her best to ignore Ahmed, but for how long? She would need to accept the situation one day or the other. I really felt bad for Ahmed in the scene where he tries to wipe Haaniyah’s tears and she moves back. Despite of her behavior, he is being extremely patient and understanding and this is one thing I really like about him.

Ahad was in for a huge shock when he got to know about Ahmed and Haaniyah’s wedding. He looked at everyone like they had committed a huge crime! And I was glad that his mother finally gave him a piece of her mind. I loved the scene where she taunted him on his face that why he cares who Haaniyah gets married to since he already left her without a second thought! Shehzad sheikh really needs to work on his expressions; he had the same expression on his face when he was surprised, shocked and angry.

What annoyed me the most was Haaniyah’s reaction when Ahad came back; she was all happy and her whole face lit up until she remembered that she was now married to his brother. Technically, she should hate him for what he had done to her, but it seems that she is still incapable of showing such an emotion.

Samina is not going to change her ways anytime soon and I agree with Zaheer (Samina’s brother) that she has turned like this because of all the support she gets from her mother. He even tried to explain to his mother to leave her alone and let her get settled in her own life, but she took it in the wrong way and blamed Afshah for brainwashing his son. I have always liked the patient and understanding nature of Afshah and I like the fact that she always uses a practical approach to deal with all her problems.

Haaniyah’s parents were shown extremely worried about her future and were impatiently waiting for her to come at their house to see if she was okay. Haaniyah has always had a very strong bond with her father, and I loved the flashbacks they showed in this episode. She has not spoken much after her wedding but she finally opened up in front of her father and shared her feelings with him. Her father consoled her and gave her the assurance that time will make you adjust with the situation. I am pretty sure time is what Ahmed and Haaniyah’s relationship needs right now.

They are still using Humsafar’s back ground music in many scenes and I cannot seem to concentrate on the scene whenever it plays in the background! The show has a nice OST which can be used in the background; I wish they would use it!

From the next episode, the concentration would be on Ahmed and Haaniyah’s relationship hopefully, and I am really looking forward to that.

Do share your opinion about the episode as I would love to hear them.