Wow! I was really surprised at the pace of the show this week. So much happened in a single episode! Ahmed and Haaniyah fought, made up and starting leading a normal life and all of this was shown in one episode. That’s quite a feat alright, considering the pace of the show in the past. I am not complaining though!

My heart went out for Ahmed when Haaniyah lashed out at him with such cruel words. The poor guy was trying so hard to make her happy, and just when he thought she was warming up to him; she revealed her true feelings about their relationship. Ahmed got hurt at her cruel words and we FINALLY saw an angry Ahmed. I was wondering where he gets so much patience from, but it was finally proved that he was a normal human being who has his limits. Ahmed’s so called batameezi did not make any sense to me he just took the clip out of her hair, that’s all. What is so wrong in that?

Ahmed should have given Haaniyah a reality check a long time before, and I was really glad that he finally burst her bubble. Then of course came the best part of the episode; this time Haaniyah was running after Ahmed and not the other way around. Haaniyah’s continuous attempts to say sorry and Ahmed’s cold response were definitely a treat to watch. Ahmed is a practical man, he was not showing his male ego; he had just given up on Haaniyah and their relationship because her words reflected what was in her heart. Ahmed bared his heart in front of Haaniyah and all he got was a cold response from her.

This dialogue had me rolling my eyes. What does Haaniyah really want from Ahmed? When he pays her attention, she does not like it and when he doesn’t, she complains. She is not satisfied in either case! All Ahmed wants is to lead a normal life with Haaniyah, and I am really glad Haaniyah finally understood this and came to her senses.

The scene where Haaniyah breaks down in front of Ahmed and apologized was beautifully enacted by both the actors. For once, Soniya did not over act, which she tends to do a lot. And the best dialogue was when she told Ahmed ‘Ahad apki paon ki dhool ke barabar bhi nahi hai’. She made the decision to keep the past behind her and start afresh with Ahmed, and Ahmed was really happy and relieved to hear this.

Haaniyah and Ahmed’s random conversations and outings were simple adorable, and I had a huge grin on my face during all their scenes after the patch up! Ahmed keeping flowers on the bed, Haaniyah crying after the movie and their discussions on silly topics made me feel like I am seeing two teenagers in love for the first time. Phew! It took 11 episodes for them to fall in love. That was one long ride! 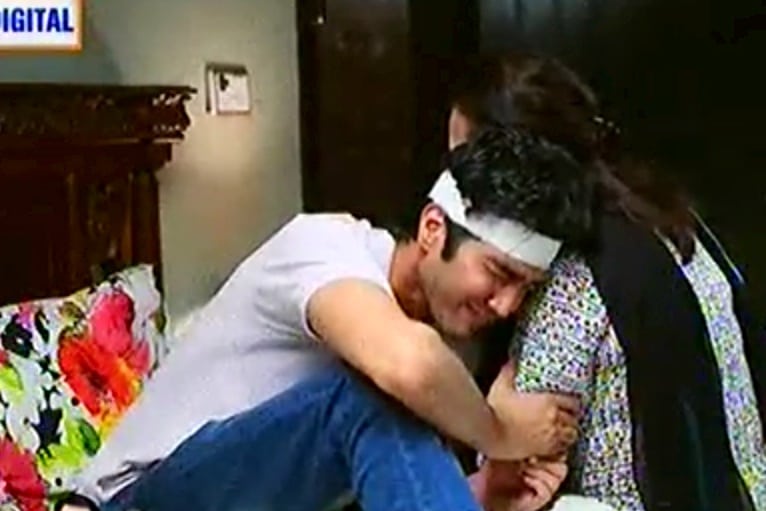 For the first time, I enjoyed watching Ahad’s scene, and did not flip the channel like I usually do. He shared his feelings about the situation with his mother, and now that he has had the staggering realization about what he had done, he is unable to come to terms with the situation. He completely broke down in front of his mother, and well, I can’t say I feel any sympathy for him.

Samina’s demand to Ahsan was the biggest joke ever in my view! I wonder if Ahsan gives in to her demand then how he will deal with two kids in the house. The sudden thought about a child came when she heard that Afshah is expecting. Ahsan’s reaction was predictable; he wanted their relationship to strengthen first before they thought about this.

The show has gotten really interesting and we can expect a faster pace in the future. *fingers crossed*

I would love to hear your opinion about the episode!