They say that all good things come to those who wait so I sat through most part of this latest episode waiting for the time when Zaroon and Kashaf will finally meet again and the last few minutes were just not rewarding enough. I must confess that I feel somewhat cheated because I had very high expectations from this episode.  There have been many episodes of Zindagi Gulzar Hai in the past too when there were hardly any Zaroon/Kashaf interactions but I enjoyed them nevertheless because they had a great deal to offer. The first half of today’s episode was extremely repetitive with the same issues resurfacing over and over again. Am I the only one who wants to skip the scenes with Asmra in them? I am sorry I do not want to sound biased but honestly speaking there is nothing new about Mehreen Raheal’s character or her acting. The arguments that Asmara and Zaroon had were nothing new either. The Zaroon/Asmara track could have been easily wrapped up by now. The fact that Sara and Farhan are having the same issues does not help at all. I think both these relationships and the different issues Zaroon/Asmara and Farhan/Sara are having have been dragged on for way too long. 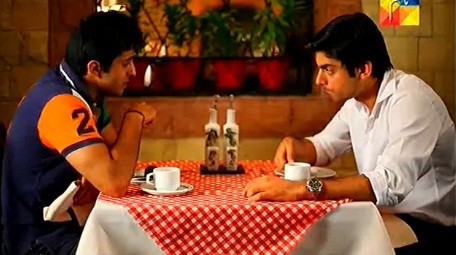 Zaroon’s conversation with Osama was a breath of fresh air because Zaroon opened up with Osama more than he has with anyone else till now. Just when I started wondering where Osama had gone and whether he was going to be back or not and what became of HIS infatuation with Kashaf, I was pleasantly surprised to see him telling Zaroon exactly what we all have been debating about for so long now. He told Zaroon right in the face that he talked to other girls openly too and that he was being a hypocrite. I do not think that Zaroon was comparing Asmara to Kashaf all this time even subconsciously but Kashaf is definitely closer to his ideals than any other girl he has met till now. His major issue with Asmara is that she does not give what he says and how he feels enough consideration and that she goes out with her male friends who Zaroon does not like. Honestly speaking any other girl who wants to make her relationship work would gladly compromise on these issues without feeling like a “slave” or “kaneez” but these women have a mind of their own.

The highlight of the episode had to be that Murtaza finally realized that he has not done anything for his daughters and they owe him nothing. I expected him to still go ahead and ask Kashaf for favors but the fact that he did not do that went to show that he knows better now. I found Kashaf’s dialogue regarding the “bemar zehnayat” and the reason why most people opt for CSS and do not become doctors, engineers etc self contradictory. I wish we could all have a clearer idea as to why Kashaf opted for government service after doing MBA if this is how she feels about people who would rather get into government service than go into any other profession. She said herself that any other private job could have been more lucrative monetarily. Rafia defended government service more than Kashaf so was it Rafia who wanted Kashaf to do CSS all along? I thought clearing CSS exams and getting into that kind of a job was Kashaf’s dream.

Junaid finally decided to say out loud how he felt about Ghazala ignoring her kids all these years but the way he did it was quite unimpressive and I must say that it is too late for all of that now. Ghazala’s attitude later on when Junaid tells her that Farhan is going ahead with the divorce went to show that nothing that Junaid says to her matters in any way. It is almost annoying the way all these three women completely fail to understand what their men mean when they ask them to compromise or to teach their kids to compromise. 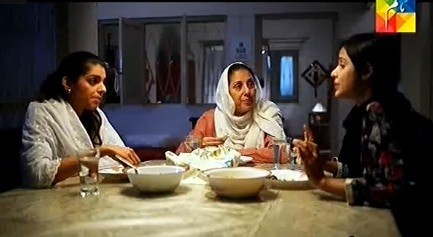 Rafia’s dialogues about how people’s attitudes change towards others and the reason why most people work so hard to change their circumstances was something that truly made me think. I love how some of these dialogues have so much depth. I liked it when Kashaf asked her mother if Murtaza had apologized for his wrongdoings. Since the change in Murtaza’s attitude has come right after Kashaf’s success so I am wondering if the remorse is genuine, after all that he has done it can’t be too easy for Kashaf to forgive and forget.

Kashaf and Zaroon’s meeting which was the reason I looked forward to this episode all week was so brief that there isn’t much that I can say about it. The precap suggested that Kashaf’s attitude towards Zaroon is not going to be any different even after all this time maybe because she does not forgive and forget easily. I am really looking forward to finding out what Osama has to say to Kashaf.