The clash of egos continued for most part of this latest episode and most of the things that Zaroon said in today’s episode sounded very contradictory. He told his father that the reason he was mad with Kashaf was that she did not ell him about the proposal, after his father talked to him he also accepted that he was the one at fault but later on he told Kashaf that the reason he was so angry was because she had told sir Ibrar everything that had happened. He also said later on that it was her mistake and she should have made the first move and set another rule to guide them through the way!! Zaroon was being completely childish today but it was nothing that was not relatable. I am sure there have been times in everyone’s marriage when one of the partners may act unreasonable and the other one may not be willing to give in too. Sara finally gets married and despite of all their differences, Zaroon and Kashaf manage to put smiles on their faces when they are around people but also exchange meaningful glances whenever they can. 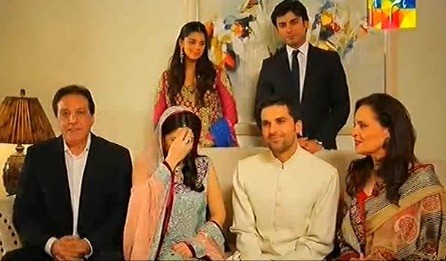 Some of the scenes today were quite nice and I actually found them funny and relatable as well. One of them had to be when Zaroon decides to swallow his pride and tells Kashaf “achi lug rahi ho” but when she doesn’t give him a positive response he decides to cancel the lunch and thinks to himself “itni bhi achi nahi lug rahi, hud hoti hai batameezi ki”. Kashaf and Zaroon made up soon enough when Kashaf tells Zaroon that she was expecting and honestly speaking I was left wondering what was the purpose behind showing the misunderstanding between Zaroon and Kashaf when it was not going to change anything between them or change them in any way.

Kashaf’s pregnancy should have come as a good news to her but try as she may, Kashaf cannot get over what she has gone through all her life, all her life she has been made to feel like a lesser human by her own father  because she was a woman and unconsciously she also thinks now that she needs to have a son in order to be accepted by her In laws and maybe the society, although she knows only too well that Zaroon and his family members are very different from Murtaza but she will need more support from Zaroon. She needs to be assured that Zaroon will be there for their children and in the next episode, Zaroon will do just that. 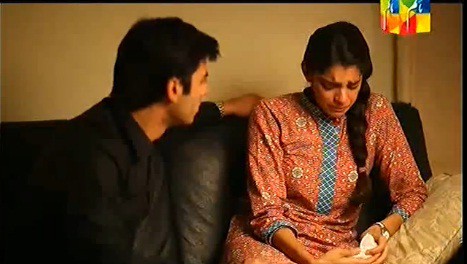 I agree that Nigaar in no way is the perfect mother; she really is one of those women who spend more time being concerned about what is going on in the neighborhood than what goes on in her own house but Murtaza or Hammad in my opinion were not really in the position to judge her parenting skills. Yes mothers have a big role to play in their children’s upbringing but fathers have a very important role to play as well. Hammad is mature enough to know his own acha bura and he isn’t a little child who needed guidance every step of the way. Muratza showered him with gifts all the time despite of his failing grades and now he holds Nigaar responsible wholly; I would most surely call it scapegoating. “agur meri maan bhi parhi likhi hoti tu mei bhi laik faiq hota” sounded like a very wrong thing to say. Nigar all of a sudden has decided to turn to Rafia for every possible thing. Rafia, no doubt has been an ideal mother in every respect but I wonder if it is such a good idea that now she will be raising Murtaza’s children as well. Finally Murtaza apologized to Rafia and she also said everything to him which she had not said all her life. Rafia’s long struggle has won her the acceptance and recognition that she had never even dreamed of. 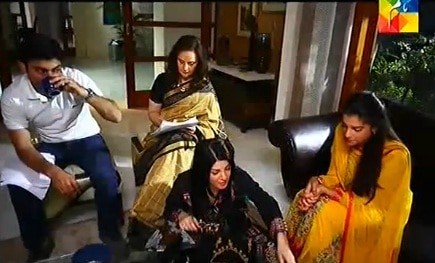 I have a question, what did Asmara want to talk to Zaroon about? That particular scene came out of nowhere. And why is it okay for Zaroon to meet her ex fiancé without informing his wife? Doesn’t he owe some “loyalty” to his wife as well? He did question her loyalty to him when he found out about Osama. Anyway I guess we shouldn’t be asking such questions now because it looks like all is good between Zaroon and Kashaf now and it will stay that way.

Today’s episode had a great deal to offer but somehow Rafia’s “triumph”, Zaroon and Kashaf’s patch up, Kashaf winning over her in laws and Sara’s happy ending failed to leave the impact that I was hoping they will have. Share your thoughts about this latest episode.