This latest episode started with highlighting the different ways in which Rafia and Ghazala think. While on one hand Rafia is constantly advising her daughter that she should try her best to do everything she can in order to live upto the expectations of her husband and to go the extra mile to get closer to her in laws, on the other hand Ghazala is bent on proving to Zaroon that Kashaf is a typical girl from a middle class family to whom money matters more than anything else. When she asks Zaroon about his visit to Kashaf’s house, her intention clearly was to highlight the class difference between the two. Rafia was right when she told Kashaf that she had not spend enough time with her mother in law therefore she did not know Kashaf well enough to judge her on the basis of who she is but judges her on the basis of her background…this goes to show that Ghazala is prejudiced and like Kashaf said she will have to work very hard to change the way she thinks about her.  The fact that Kashaf tried to get closer to her in laws despite of all her fears only because her mother made her realize that it was the right thing to do, went to prove that no matter how we perceive Kashaf’s character, she is actually your normal average typical girl who wants to do whatever she can in order to make her marriage work. The way she reacted when Zaroon did not tell her just how much he missed her when she called to tell him she had reached and her reaction to Zaroon being busy with his friend’s later on went to show that like any other new bride, she longs for her husband’s undivided attention and wants to hear him tell her just how much he loves her. 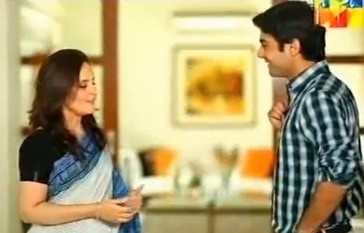 I really like Zaroon’s approach when it comes to tackling different issues; he listens to his mother patiently and does not tell her that he did not agree with her even though he clearly disagrees with her and even after the argument he has with Kashaf after she does not answer his calls all night, he still takes the first step and sets the rules as he goes. Kashaf may not tell him just how much she misses him but he is quite happy with the clues she leaves him with and derives the right conclusions from them. Zaroon Junaid has certainly grown into a very sensible person and Kashaf has clearly changed too. Kashaf does not even give a hint to Ghazala that she heard what she said about Kashaf and that certainly says a lot about how much Kashaf has changed. 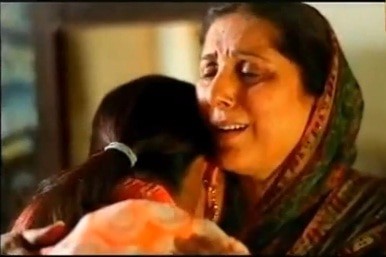 The scene that followed after Kashaf heard Ghazala’s conversation with Zaroon was simply heart breaking. The way Kashaf tells her mother “ami mujhe chor samajhte hai vo” and breaks down was heart wrenching. If Kashaf was still the person that she used to be, she would have given up on Ghazala altogether and would have given Zaroon a very tough time too but she knows that she has to work hard to make this relationship work and she is willing to spend the rest of her life trying to convince Ghazala that she is not a greedy person. I really like the way Rafia explains things to Kashaf, when she tells her “hur class ka admi dusri class ke bare mei ghult fehmi rakhta hai”; this is something Kashaf could relate to because she had a lot of misconceptions about people belonging to the upper class too. Kashaf’s reaction to the news that she has been transferred to the news was too cute for words; she couldn’t stop smiling.

It was good to see that Asmara has moved on and that chapter is closed, whatever she thinks of Zaroon now does not matter much now does it;) This particular scene seemed quite unnecessary though since Asmara had nothing new to say really. The precap for the next episode seems alarming, just like the last one did but it was good to see that there was no big misunderstanding between Kashaf and Zaroon today. 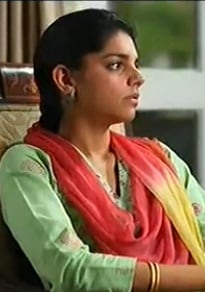 Here are few of my favorite moments from today’s episode:

– Kashaf sitting and wondering whether she should call Zaroon or not and then deciding to call him.

– Kashaf’s attitude towards the people at the workplace changes after the phone call from Zaroon.

My favorite dialogues from today’s episode:

“Vo log tu hamare khanda ka hisa nahi banay beta, tum unke khandaan ka hisa bani ho, is liye tumhare paas un ke liye wakt hona chahyeh”. Totally agree with Rafia’s advice, a girl always has to change herself and work hard to adjust in the new home. Obviously it is the duty of the boy’s family also to their best to make the new bride comfortable and not judge her but if that does not happen than the girl has no choice but to change the way her in laws feel.

The funniest dialogues from today’s episode had to be “you insulted my intelligence”…really Asmara, you have got to be kidding me ;)

Share your favorite scenes and dialogues with us…looking forward to your comments.