It seems like there is trouble in their ‘Choti Si Kainat’ as Adeel described it.  Adeel is getting more frustrated by the day because of his joblessness and his inability to fulfill his family’s needs. The loving and caring Adeel has just vanished and we got to see a new side of him in this episode. Adeel went to one office after the other to find a job but to no avail as he gets rejected everywhere. He has studied from government institutions and needs a powerful source to get a good job. The rejection disappoints and frustrates him and his attitude towards Silah becomes very harsh. I felt really bad for her as she has become a punching bag for Adeel who leaves no chance to vent his frustration and anger on her. Silah never gets upset on his outbursts because she knows he is growing through a tough time and he eventually does apologize to her for his rudeness.

Adeel is already having a hard time finding a new job and top of that every other person keeps on asking him about his job which manages to irk and irritate him even more. The most annoying character I found today was of Zoya’s mother who kept on taunting Adeel and Silah about Adeel’s lack of job. Why cannot people just mind their own business! Adeel gets sad when he sees that most of his friends had found a new job as they had backup from their parents or relatives. He needs a strong recommendation or a source to get a good job but unfortunately, there is no one present to support him in such a bad time.

Well, as it is said that when bad times come they come in full force! Adeel was already very upset about not getting a job and on top of that his bike, wallet and mobile get stolen. His expressions when this incident happened made my heart go out for him. Imran Abbas just nailed the scene with his brilliant acting. Adeel had totally given up after this incident and when Silah tries to console him, he gets irritated and once again gets angry at her. He gets so upset that he starts arguing and fighting with people for petty reasons. He got into an argument with his landlord and then fought with a stranger just because he accidentally collided with him while walking.

Zoya has proved to be a huge support for Silah in such bad conditions as she provided Silah with moral support and kept on boosting up her spirit. She advised her to find a job for herself so that she can support her family. Silah is reluctant at first as she knows Adeel would not give permission but when their conditions take turn for the worst, she finally asks Adeel but as expected he gets furious at her for even coming up with such an idea. I was taken aback when he said ‘Shut Up’ on Silah’s face! That was extremely rude of him to behave with her in such a way. Adeel is shown as an egoistic character whose self respect is everything for him and to let his wife work while he sits at home is just not acceptable to him. His stubbornness is bound to create problems for both of them in future.

Zoya once again managed to lighten the mood with her hilarious scenes. Her positivity and enthusiasm is infectious and she once again managed to entertain me with her antics. She was least bothered to know that her cousin who had offered for her before is getting married. She is preparing to go for his wedding in Bhawalpur and the scene where she goes to Silah’s house to borrow her dresses for the wedding was hilarious! I loved the way she said “Aik Mehndi Ka, Shaadi Ka, Aik Valime aur Aik Extra Bhi Chahiye Hoga” 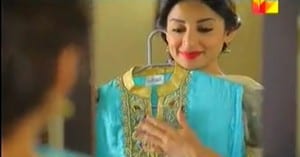 The preview for the next episode seems a bit scary as Silah gets a job without Adeel’s permission which makes him angry. Aijaaz Aslam is also going to enter the show in the next episode. It seems like he is going to be Silah’s new boss. Let’s see what story is in store for us in the future. Adeel and Silah are in for a rough time as Silah’s decision to work will affect their relationship. What do you guys think about the episode? Share your views and keep watching!