So this episode was for sure the best one for me so far. I felt the direction was spot on & a few dialogues were perfect to the extent of being realistic. I enjoyed the whole episode a lot more than the previous one.

Firstly, we got to see what we all waited for. Anam approaching Sherry & getting insulted by him. I, once again, kept on wondering that how come she could barge into his home unannounced & trying to get in a talk with him where she knows he is clearly not interested in her any more or wasn’t even interested since day one. Her accident, seemed like a scene from Indian movie as well but was fitting in the place really well. At some point, seeing her crying made me feel bad for her because it’s not her fault for the way she has turned out to be. Her parents should be blamed completely for not only spoiling their daughter but their son to the core as well.

Sherry was once again trying to come over with the whole issue but Shahzeb played his bit of a role. Even though, Zoya’s friend Zainee started ignoring her after finding out her reality but she always felt for her & was considerate enough to inquire about Zoya once she left the college. Zainee is again different from her sister Ayza who is nothing but a make up clad stooge of Anam. I couldn’t understand why Shahzeb was beating around the bush all the time? Why was he taking so long to tell Sherry what actually happened & WHY Zoya came to his place that day? I thought finally he has taken a good step but failed miserably without clearing off any accusation that surround Zoya right now.

All this while I was thinking when did Zeeshan become such a brother to Anam & started acting like one? He was never seen interested in any of her things & was always on his own trip but just because he can not touch Ansar for his rudeness, he is trying to use Sherry as an excuse to pressurize Ansar as well.

The highlight of the whole episode for me was the conversation of Mariam & Ansar. Ansar who acted like a rigid man with a facade of being too manly, broke into pieces just because of a normal staff girl. He actually wanted someone to hold his hand & pull him out of his misery & Mariam stepped in at the right time. All her dialogues were written to perfection & the acting was flawless too, she was shattered but held herself together just for the sake of her husband & their marriage. I loved when she said that people act being pious but deep down they are anything but that. The way she suggested him of being afraid of Allah came as something unexpected because in most of the dramas people just do not give such reasoning when facing a trauma but this caught me by a pleasant surprise. Her suggestion of apologizing was spot on too & now in the preview of upcoming episode we saw Ansar breaking down completely in front of Sherry. Finally showing that Mariam has made her place in Ansar’s heart & has saved him.

I thought it was only Anam who framed Zoya with the help of her friend Ayza but now it got a bit more clear that Ansar & may be his father, from Sherry’s family were involved in this game plan too. I absolutely enjoyed watching this episode the most because so much was going on but each & everything was covered properly & highlighted perfectly. Can’t wait for the next one but I hate to see this drama coming to an end in may be a couple of next episodes. 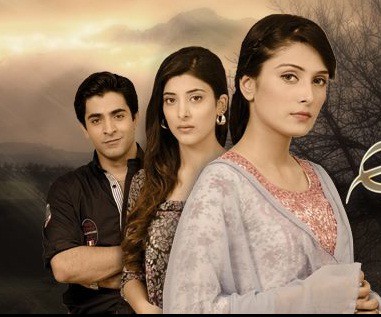