The current year seems like it has been dedicated to the marriages of stars of the showbiz industry. Since the start of 2013, we have been coming across new couples emerging on screen and this time, it is actress Juggun Kazim who has recently got engaged to Feisal Naqvi. The couple announced that they are planning to marry soon. Juggun, who is known for her hosting skills and flawless acting in many dramas has been enjoying a huge stardom and for the reason stated, her fans are quite happy for the decision she has taken. 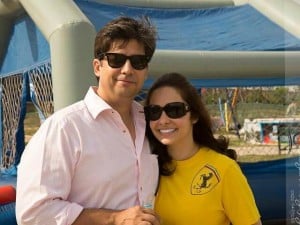 Feisal H. Naqvi is a renowned political writer and posses a great personality. It would be Juggun’s second marriage as due to some reasons the first one couldn’t work out and resulted in a divorce in 2004. Actress has a son from her previous marriage and for 9 years, Juggun has only focused on her career and brought her son up.

We appreciate her decision of moving on in her life and starting a new journey all over again,

All the best to the couple for their new life,