After all the praise I have bestowed upon this show for having a unique and fresh take on second marriages here we are back to the typical Cinderella step mom routine. It was so disappointing to watch writers resort back to the step mom playing the bad guy story arc but anyway here we are. Now that the secret is out Fehmi wants nothing more than to live with Abrar in his house as his wife since he has no excuse anymore. Abrar is hesitant in the beginning owing to the fact that it’s still new to his daughters and he found it fit to give his daughters some time before they can make peace with this reality but before he could do that he was informed that Fehmi is in hospital because her house was robbed.

By the looks of it the whole robbery thing was Fehmi’s own creation because as a result of this robbery Abrar is forced to take Fehmi to his home as she was injured and couldn’t live alone at her place. Naturally Momina and Abeer are hysterical when they see Fehmi in their house and we see a lot of arguments where harsh things are said back and forth and we can clearly see Abrar struggling between his daughters and Fehmi. So far Abrar looks inclined towards Fehmi because the way his daughters are mistreating Fehmi Abrar finds himself responsible for putting her in a position like this and that guilt is making him do everything that Fehmi wants.

On Arham’s front we see Afaan have a heart to heart conversation with Arham where he tells Arham that he can not support Arham’s decision of marrying Momina anymore because he is disappointed in Abrar. This doesn’t really make much sense even if Abrar has been indifferent towards Afaan lately Momina isn’t just Abrar’s daughter she is a separate individual. Even if Afaan thinks Abrar has married the wrong woman it has nothing to do with Momina so making her suffer by not letting Arham marry her makes no sense whatsoever. 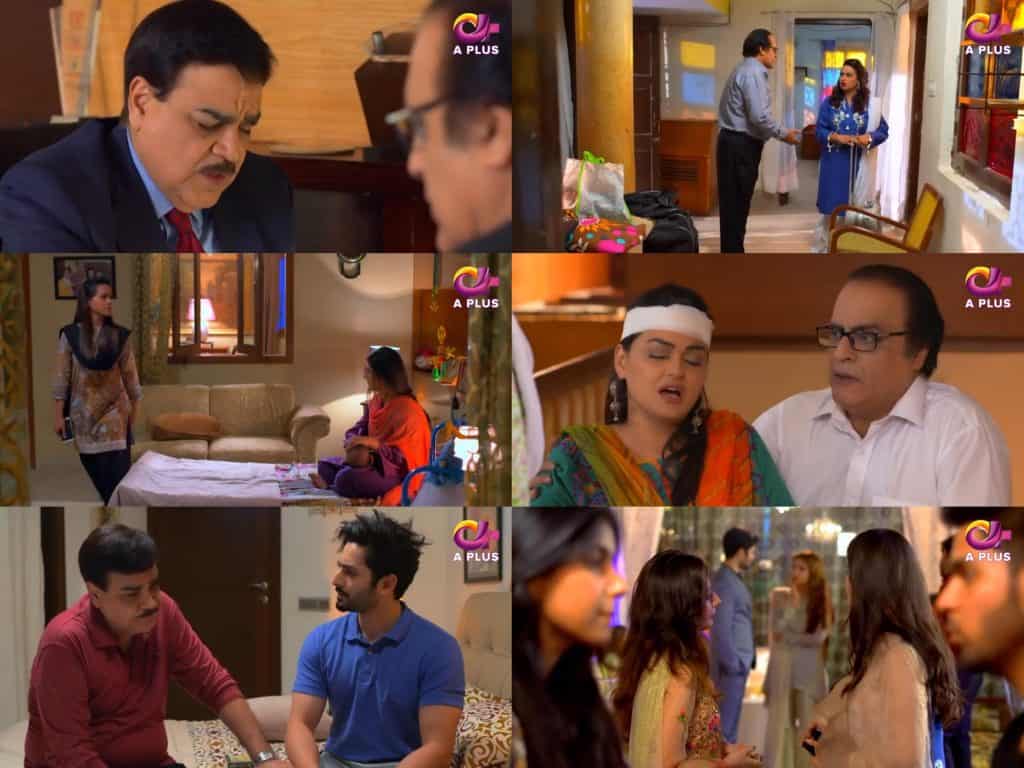 To put another twist in this already messy situation Momina and Arham attend the wedding of a mutual friend but accompanying Arham is Fizza courtesy (yes you guessed it right) Amtul. Momina isn’t shocked or rattled or taken aback much as if everything that has happened and is still happening in her world has made her immune to the unexpected, nothing surprises her anymore. Arham is clearly uncomfortable because he wasn’t expecting Momina will be at the wedding and he surely didn’t expect he would have to take Fizza with him to the wedding.

Fizza’s character can be so unbearably annoying at times, she doesn’t talk, walk or act like someone who has spent most of her life in west and we have reasons to expect more typicality on this front as well. Fizza will be acting like a conventional desi raqeeb and creat more misunderstandings between Arham and Momina so she can have Arham for herself.

Over all the pace is still commendable but the plot not so much. Arham and Momina our protagonists continue to suffer, how long will this ordeal last is what we are here to find out so stay tuned.

How did you find this episode of Haara Dil? Do share with us.