This second episode of Kuch Ankahi gave old PTV dramas vibe, it highlighted the struggles of middle-class families, some of the scenarios were not the least bit refreshing especially ‘not having the beta’ bit and there are so far a lot of situations which can not be termed as ‘brand new’. Salman and Aliya add life to the show and Sehrish’s track adds the element of intrigue. I have watched many Pakistani dramas recently hoping one of them will give me the incentive to start writing reviews regularly again. Apart from Pinjra, every single drama revolves around desperate parents dying to marry their unmarried daughters and wishing they had a son. Therefore, watching similar scenarios in Kuch Ankahi is somewhat frustrating and disappointing.

The sisters’ dynamics continued to remind me of so many such scenarios we have already seen in Pakistani dramas. Most recently Habs was one such example as well. Whether it is dramas such as Betiyaan or one like Habs, the dynamics of sisters in a middle-class household remain the same! Kuch Ankahi does not offer the novelty that Hum Tum did but the good part is that these sisters love each other and there is no sibling rivalry. While the writer Mohammad Ahmed definitely succeeded in ensuring that these characters were free of toxicity, he has not been able to add the nuances needed to add newness to the dynamics. So far, Bilal Abbas Khan and Mira Sethi’s performance is standing out more than any other. The characters, their dynamics as well as their struggles are being revealed gradually which is another promising aspect since most dramas that are too fast-paced in the beginning; die down after a few weeks.

This latest episode opened with Samiya and Alia’s conversation which reflected their concern for their father and Alia’s relentless efforts over the years. While Samiya plays her part by being the ‘good daughter’ who does not want to burden her parents in any way, Alia is the one who is practically doing everything in her power to change the situation her family is in at the moment. It was nice to see these sisters bonding in an organic manner. They have been raised well and there are times when you wonder how they turned out to be like that because clearly, they are not ‘valued’ as much. Their mother is constantly complaining about one thing or the other and the father doesn’t think he has enough support because he does not have a son. Although Samiya’s character is a lot like the bari behans we have seen in Pakistani dramas, Mira Sethi’s performance makes it likable and you don’t want to forward her scenes. Tania’s scenes in this episode were much more interesting than the previous one. I liked her equation with her friend; it was good to see a girl and a boy being just friends. Even Tania’s mother was quite open-minded about the situation. In old PTV dramas, the helpers in the house used to have a personality and presence of their own and I think Mohammad Ahmed has tried to achieve just that by adding Meena’s character to this track. 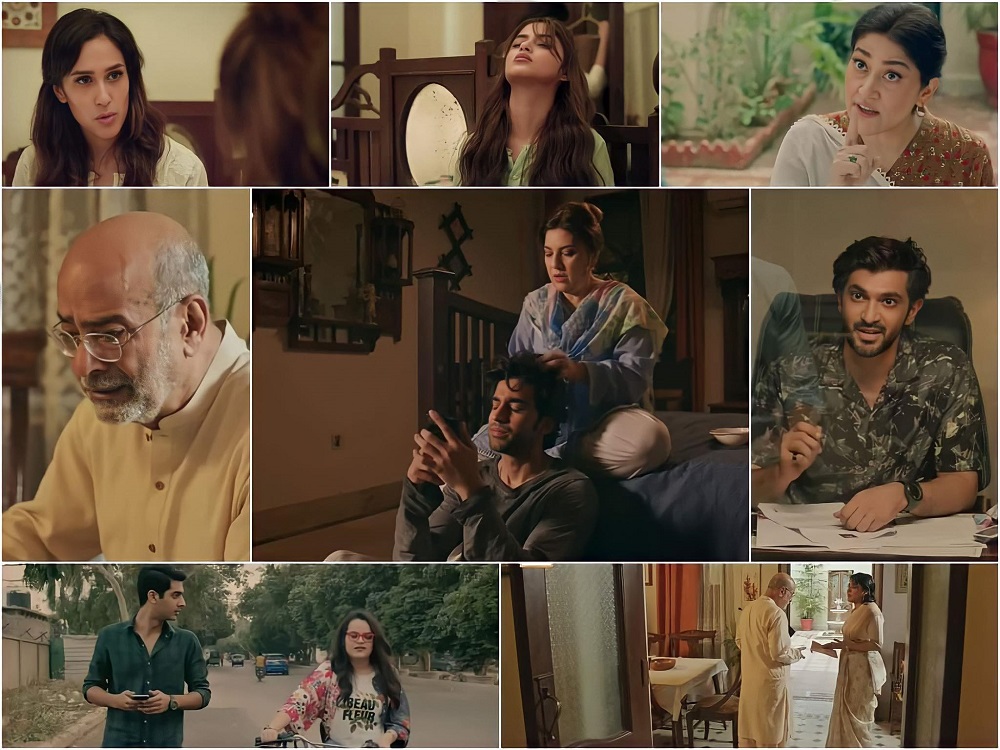 Salman’s scene with his mother was a lot like Samiya’s scene in the previous episode involving grey hair. Salman’s mother comes across as an easygoing parent who desperately wants her son to get married. The dynamics in this household seem to be different from that of Alia’s because so far there are no serious financial worries. These conversations/scenes could have been more diverse. I am wondering if the situation is as ‘simple’ as it seems or if there is more to this track.

Salman and Alia deserve a special mention in this review as well because their scenes change the overall mood of the drama. The second these two come face-to-face they turn into completely different individuals; it would be safe to say that they bring out the fierceness in each other. Once again Salman’s friends’ dialogues helped the viewers see Alia from a third person’s point of view – someone who is neutral. Salman, however, fails to see any positive aspect in Alia’s personality and is bent on winning. It is interesting how Salman and Alia both are at the end of the day working to make ends meet yet they don’t see the ‘human’ element of each other’s circumstances. Perhaps once Salman moves into Aliya’s house, he will see that part of her life that is completely hidden from him. Sajal Aly is at her best when she shares the screen with Bilal Abbas Khan; there are very few actors who make such remarkable on-screen couples and these two definitely take the lead.

Sehrish’s track is intriguing, we still don’t know why she is living with her father and why is she trying to sell these properties. All we know so far is that she is a caring and intuitive individual who is trying to make things right but is failing. She is trying to mediate between her father and Azfar continuously. She is also another one of those characters in the drama trying hard to hide her pain from the world by showing her strong side only. Azfar holds a grudge against his father but even the father has no clue what the reason for that is. I am waiting to find out more about both of these characters.

After watching these two episodes, I feel that Kuch Ankahi could be the kind of drama that slowly grows on you. It is not an all-out winner but it has enough going for it to keep me coming back for more. Also, I am waiting to find out what is the actual purpose behind the story because dramas produced by Kashf Foundation always have a definite purpose. I am one of those people who do not watch interviews in which people involved share what they were attempting to achieve by telling a certain story because I like to watch and understand the drama from a viewer’s perspective without any preconceived notions based on these interviews. Therefore, if you are someone who has watched all these interviews and finds it strange that I am clueless, please bear with me :)