Ohkay so, this episode gave closure to one of the tracks of the story, at least for now. It was one such episode which does not allow viewers to look away even for a second because everything that is happening is so intense, so gripping that you just can not afford to miss even a second of it. The credit definitely goes to the director, but more than that to the powerful actors who gave such phenomenal performances throughout the episode. Every single scene was laden with so many emotions, while listening to them you could hear the pain, the trauma that they had endured. This was one intense episode of Alif & the team behind this drama should be very proud of themselves for doing justice to this script written by Umera Ahmed.

Sultan did everything he could to save Husn e Jahan. He only wanted to help her. It was very clear that Sultan’s intention was not to help her son or her husband, but only her, especially after he met her. Sultan found it very hard to accept that Husn e Jahan was not the same person anymore, she was now a wife who was suffering at the hands of her husband & she was a mother, a selfless one at that who wanted to forsake everything for her son’s comfort. Husn e Jahan’s helplessness was convincingly portrayed by Kubra Khan. I couldn’t stop feeling the pain Husn e Jahan was suffering from because of Kubra’s outstanding performance.

Taha & Husn e Jahan finally came to a closure. Taha said what he felt he needed to say & Husn e Jahan also said everything to let him go. She loved him selflessly, that is why she decided that the only option left for her to help her husband was to let him go. She knew that none of her justifications will be accepted by her husband. She also knew that he will always doubt her reasons. What Husn e Jahan did was the final blow to Taha’s already shattered ego & because she kept Taha’s pain ahead of hers, she decided to set him free. Taha had time & again reminded her that he was suffering because of her, this marriage had cost him everything, his choice of Husn e Jahan over Abdul Ala had destroyed him, so there was nothing else left for Husn e Jahan to cling onto. No hope, absolutely nothing. It wasn’t because Husn e Jahan was tired of this life, it was because she was done seeing her husband in so much of pain.

Once again, all this while, I could not help but think why was Taha doing all of this? Why was he time & again holding his wife responsible for his incapabilities? Why was he victimizing himself & not owning his own shortcomings? Another beautiful aspect that surfaced was that Husn e Jahan was very much sorted about what she wanted from Taha & what she wanted from this relationship. She readily left everything behind to live the life Taha was living but Taha had doubts, he had fears, he also had regrets & unfortunately, all of that made him bitter – so much so that he ended up not seeing Husn e Jahan for who she was. 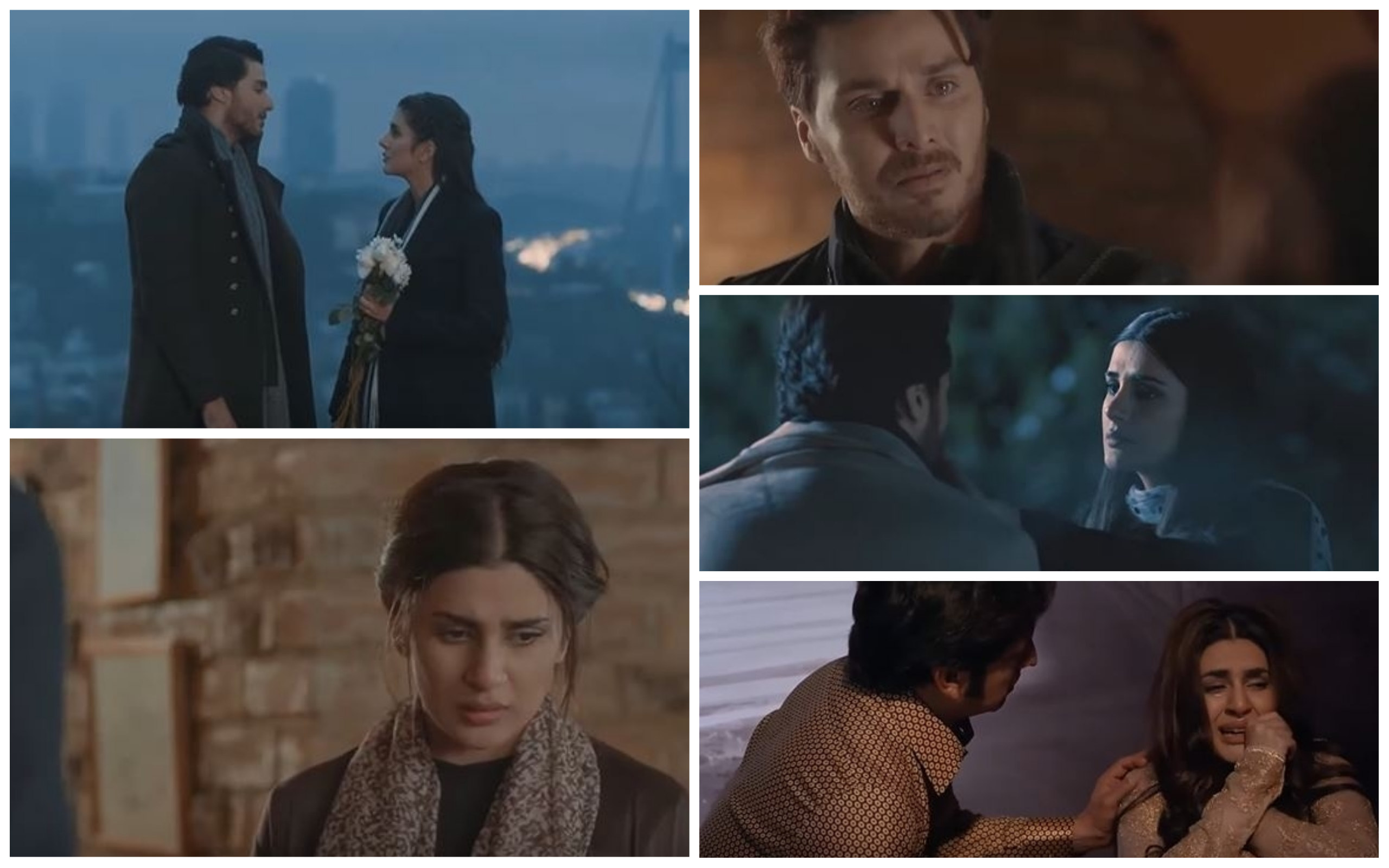 The flashbacks that showed the initial stages of Husn e Jahan & Taha’s relationship were so heart-breaking yet beautiful. How realistically it was portrayed that every other relationship starts on a beautiful note but its the trials which the couple has to endure which tests their loyalty towards one another. Husn e Jahan was loyal to him, Taha was too but it looked like his only resort was to blame Husn e Jahan for everything wrong in his life, which is why he failed to see her transition, how she was lifeless & how she had no needs, no desires left in her, all because of him!

Qalb e Momin enjoying his meal while his mother cried was so heart-breaking. The poor child did not know the price his mother had to pay to make it happen for him, but then this is what motherhood is all about – its about being selfless, it’s all about bringing one smile to a child’s face. Husn e Jahan did everything she could but unfortunately, she was misunderstood. Her mother misunderstood her, her husband misunderstood her, Abdul Alla did the same & later her only son Qalb e Momin ended up doing that too. How unfortunate. Husn e Jahan lived her life for others & sadly when she made one decision for herself, it took everything away from her.

Another powerful scene of this episode was of Sultan & Surraya. Surraya loved him selflessly & this is what forced Sultan to accept her in his life. He did not want to, he held onto the last glimmer of hope that maybe one day Husn e Jahan will come back to him but after he saw her, his hope died. Sultan let Husn e Jahan influence the biggest decision of his life. It was also Surraya’s submissiveness which made him propose to her. I felt for Surraya a lot, she felt happy but may be she did not know that the man she was in love with, will never be able to love her the way she deserves to be loved. Sultan sold his house for Husn e Jahan & kept that a secret from her. His love for Husn e Jahan was special too but then it was his misery that it was an unrequited love.

The struggle that Husn e Jahan was going through after coming back to her mother’s place was so evident in each & every scene. It was beautifully captured how Husn e Jahan was only doing all of that to please her mother & also because she knew this is what she had to do in order to survive. The disgust on her face, the discomfort & the resentment of the entire environment was so obvious even through those subtle expressions. Once again, Husn e Jahan had no control of her life & she had to live for others.

Sultan ended up lying to Momina once again. I am not sure why he didn’t tell her about Husn e Jahan’s second marriage & made it look like she committed suicide. Obviously, they will reveal it all later but at this moment, I am unable to figure out his reasons. Saleem Mairaj’s minute expression which showed that he lied to Momina was phenomenal. Each & every single actor has breathed life into this drama which is beyond impressive. Momina relates to Husn e Jahan, she has lived her life through her father’s words. Momina has seen how much respect her father has had for Husn e Jahan, therefore she has a special place in her heart for Husn e Jahan, that is why getting to know about her tragic end shattered her. Momin got to know that now Momina Sultan’s name & her popularity had fizzled out his name, just a news bulletin was enough for him to understand this reality but he seemed unbothered. For him, the only thing that matters is his movie, the story of his mother & that’s about it.

This episode of Alif was filled with phenomenal performances. This episode for sure belonged to Kubra Khan as well as Ahsan Khan. Their performances, the flow in the dialogues, the display of emotions & the pain – it was all a work of art. These kinds of performances are experienced once in a while on our TV screens, therefore it was too much to grasp. However, the way everything was executed made it so seamless & easy. Each & every team member responsible for making Alif what it is should take a bow. Kubra Khan has definitely given the best performance of her career so far. It won’t be wrong to say that Alif has turned out to be one such project for her where she gets to actually prove her caliber as well as show it to the world what she is capable of as an actor. Her performance in this episode was unparalleled. Saleem Mairaj is another star of this drama. His expressions, his performance is more like an honor for the viewers to watch. All of these actors have surely breathed life into these characters. Ahsan Khan was so powerful in this episode, each expression of his was calculated, so much of grip on a character shows the intensity & the loyalty an actor has or feels towards a character.

The preview of the next episode was promising. It seems the story will now focus on the present & the equation of Momin & Momina, which I am keenly looking forward to. Oh yes, just a random thought – Sultan placing a brush in his mouth while doing Husn e Jahan’s makeup was so unhygienic. The makeup artist & Husn e Jahan enthusiast in him didn’t know that on a sanitary side of makeup world, it’s a big no no, haha. Please share your thoughts about this magnificent episode of Alif.