So episode 16 went down today and it was a rather slow one, nothing of consequence happened in it. Faraz got a lot of screen time in this episode and he did better in this episode as compared to the previous one. This whole Faraz and Abeer story arch is still too much to swallow, Momina had hardly spent five minutes with him and she decided to suggest the idea of him marrying Abeer. It is as if Abrar and Shagufta never warned Abeer and Momina about strangers especially the strangers who propose marriage on the very first meeting. We also got to see Fehmi and Zeba bad mouth Abeer and Momina since such “ameer khandan ke larkay” are interested in both of them, I miss the old Fehmi and Zeba who were less toxic and more neutral.

In other news Qasid sees Abeer hanging out with Faraz and like any other man with fragile masculinity he runs to his mother figure Fehmi Khala and whines about how he can not marry a woman who has pre-marital affairs with guys. Upon further discussion it is revealed that Abrar was pretty smart and he left this house to his wife Shagufta and in case of her death to his daughters. Qasid then comes up with the idea that since Momina is so “shareef” and owns the house too he should marry her but while Fehmi and Qasid were busy conspiring Momina was eavesdropping and she heard everything. 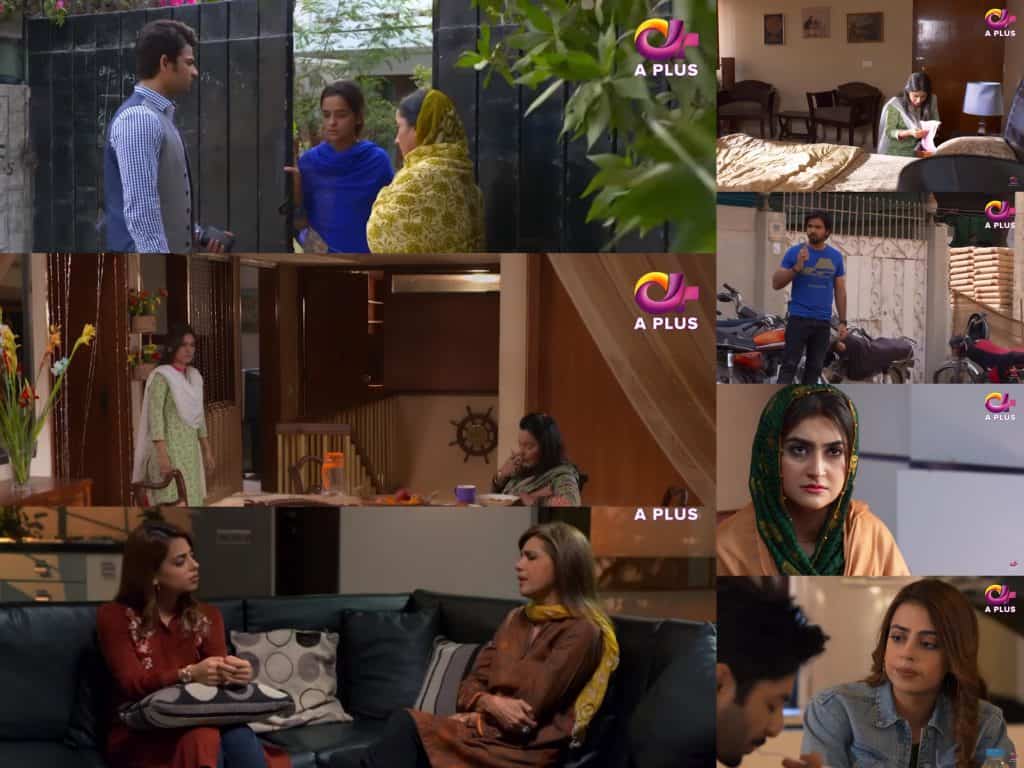 On Fizza and Arham’s front Fizza’s patience is running thin she probably thought that things between them will become better after the engagement but to her disappointment Arham is still the same old distant guy. It is understandable that Fizza is a privileged and very admirable woman and she probably has had everything in life that she has ever wanted and Arham is nothing more than another thing on her Bucket List that she has to own and she mistakes it for love but it is so unwise of both Amtul and Fizza to expect Arham to just forget the love of his life over the time span of a few days and fall in love with Fizza.

First of all why would any woman want the guy she loves to so easily get over the woman he so dearly loved. If he gets over her so easily what guarantee is there that he won’t fall out of love with you even more easily. But that’s not the character’s fault this one can be blamed on writers who still treat love like teenage infatuations or madness nothing in between.

Another thing that was unfair on Momina’s part but then again can be blamed on writers is her passive aggressiveness towards Arham and Afaan. Momina knows that she told Amtul about Abrar’s death and it is obvious that Amtul didn’t tell anyone so instead of being bitter about it she needs to inform them moreover she played victim in front of Abeer complaining about how Arham got engaged. Arham was ready to accept Momina with Sami but she refused and yet here she is complaining. It is not totally unbelievable people do that but the way Momina has been portrayed so far this is not like her.

Now that Momina is aware of Fehmi’s intentions she has become careful, as of Faraz he still comes off as a shady character, there’s still too much to be unfolded in this story so stay tuned.