This drama reminds me of Sammi because of its focused approach and the clarity with which all the issues have been highlighted. Drama serial Sammi set the right precedent by reinforcing the importance of a girl’s consent during nikkah and it is good to see Mujhe Jeenay Du stressing upon it too. Although, ultimately Saira will give into the pressure but for now it was good to see her making a decision for herself with the support of all those people who are not selfish and inhuman like Murad and even Naseeb. Naseeb also changed his decision in this episode because like all the other men around him he too is looking out for his own interests. Bakshu however is the one who should be blamed more than anyone else since he is Saira’s father. Bakshu’s character in particular is disturbing since he has no idea just how wrong he is. It is people like him who pass on these wicked customs from one generation to the other. These men who should be protecting their women rule over them and would do anything it takes to have things their way. The insignificance of a woman’s own will is the main reason why they suffer at the hands of these men.

Murad ultimately used the threat of divorce to ensure that his wife does not stand in the way of his plans and it obviously worked. Yasmin’s character has been brilliantly etched out and translated on screen. She is the kind of woman who won’t think twice before helping anyone in need but at the same time she does not let her emotions stand in the way of her well calculated actions. Instead of creating a scene at the time of nikkah she tried to look for more practical solutions. Saira’s relationship with Yasmin’s son reminds me of drama serial Rehaii and how Danish Taimoor’s character helped Shamim when she was older and ultimately married her in the end. The relationship between these two characters is heart warming. You also understand why Saira would listen to a close friend more than anyone else. It also shows how these kids are forced to make such difficult decisions at such an early age when they shouldn’t even be worrying about such things. 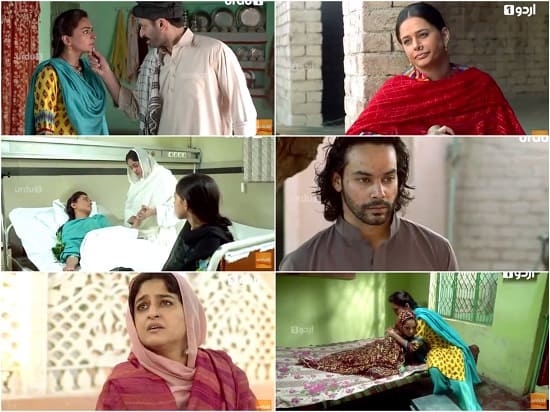 The direction and the camera work in this drama is remarkable. The manner in which the overall environment these characters are living in has been translated impressively on screen because of effortless performances and the locations is one of the best aspects of this play so far apart from a script which is authentic. Mehreen Raheal deserves a special mention here for leaving her comfort zone and excelling in a role which isn’t easy to translate on screen. Gohar Rasheed has also given a solid performance which makes you more interested in finding out what turn his track takes next. Salman Shahid’s brilliant performance, Nadia Jamil’s natural acting and the impressive performances by the child stars make this drama one of those rare plays in which there are absolutely no weak links in terms of acting. Iftikhar’s character was introduced in this episode and it is good to see Omair Rana playing this role. The flashback scenes yet again were used aptly in tonight’s episode to show how close Saira was to Bushra and how quickly things changed for her.

The preview of the next episode showed Saira’s father pressurizing her into consenting to the nikkah and it looks like this time no one will be able to help her. This serial is seriously disturbing on so many levels but then that is what is needed to make the viewers reflect upon the kind of issues women in such areas face and perhaps it will also present such victims with solutions to get out of the situation they are in.