Ohkay so, the writing of Imran Nazeer, direction of Iqbal Hussain & the production of Moomal Entertainment; Nazr e Bad is a serial that has recently commenced & airs on HUM TV on Wednesdays & Thursdays at 9PM. I gave this drama a go on the recommendation of my dear friend & co-reviewer Fatima Awan & I must say, just a few minutes into the first episode & I was hooked. I watched the first 4 episodes without a break because it was done so well that it kept me glued to the screen. Nazr e Bad is a story about the widespread evil of black magic that has taken people’s lives by storm & even though we are in the very initial stages of the story, the way it has been conveyed & the way the entire subject has been tackled goes to show that the Team of Nazr e Bad had a clarity in their minds & knew just exactly what they wanted to show. For those of you who are still on the fence about this drama & are looking for a recommendation to tune to it, I will definitely say you should because you are going to experience a unique & unusual story which is done really well!

So, the main lead is Maham (Sara Khan) who lives with her parents Shafiq (Waseem Abbas) & Nusrat (Fazila Qazi). Maham has two brothers Ahmer & Baber & they are one happy family. Nusrat & Shafiq live in a joint family with Shafiq’s elder brother Ateeq & his wife Almas (Sakina Samo), even though their portions are separate their lives are not. Ateeq & Almas also have 3 children; Humera, Parvez (Azfar Rehman) & Abeera. Humera is married, whereas Parvez & Abeera are still single. On the other hand we have a family of Nusrat’s brother Aqmal, his wife Salma & their son Aftab (Ali Abbas). Ateeq & Shafiq also have a younger sister Shahista who resides in London but has a lot of say in the matters concerning the lives & the families of her brothers. 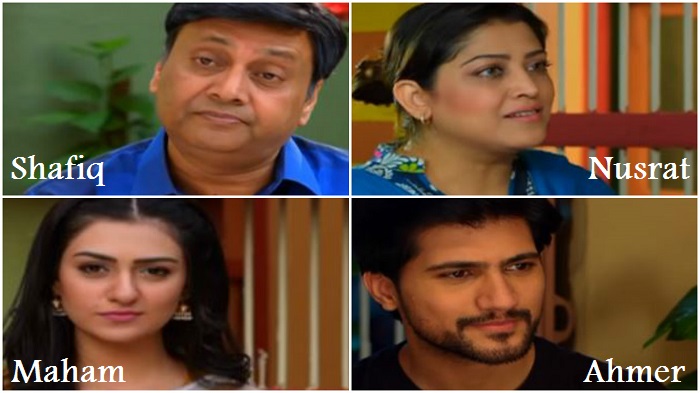 Shafiq is a banker & he naturally makes more money than Ateeq. Shafiq’s family is at a good financial position because Shafiq did a lot of hard work & his main motivation was to give his small family a decent lifestyle. On the other hand, Ateeq finds it hard to keep his family afloat & that turns out to be the root-cause of the problems between the two families. Nusrat always feels that Almas keeps a close eye on everything that Nusrat or Shafiq do for their children, she monitors each & every single thing that happens in their lives & this is something that makes Nusrat uncomfortable because she believes that Almas’s insecurity & deprivation of basic necessities has turned her into a very envious person. Even though Shafiq & Maham make fun of Nusrat’s paranoia but Nusrat has a valid reason to believe that Almas is jealous of their lifestyle & the few luxuries that Shafiq affords for his family with ease.

Almas is someone who has turned herself into a victim, she believes that she has spent her entire life wishing for things & then letting them go because she never could afford anything easily. After completing his studies, Parvez is working & he is the one who is taking care of the household expenses. I must say, the team of Nazr e Bad has dealt with this subject with a lot of maturity, based on some proper facts, that is why, everything that was shown till 4th episode made a lot of sense & nothing seemed to be done on a whim. 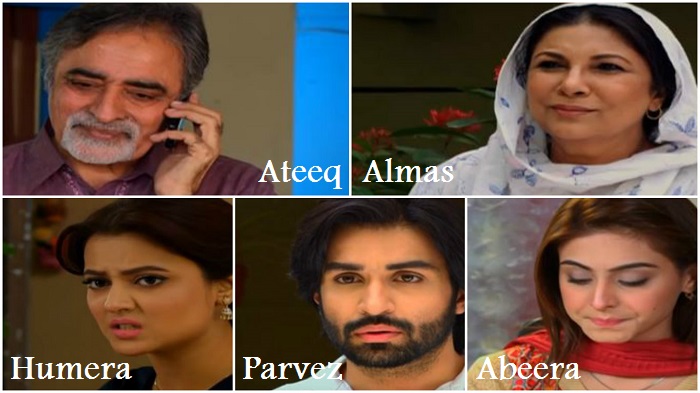 I will say that the approach of the drama-makers is commendable & the way they established the grounds for what Almas did was convincing & true, where they showed that everything started off with a mere comparison, where Almas always compared the things Nusrat had & she didn’t. Later that comparison took a form of envy, where she sighed at all the blessings that Nusrat had in her life & she didn’t. Then that envy turned into jealousy & that jealousy took a shape of hatred, which drove her to such an extent that she decided to create a havoc in their lives by resorting to Black Magic with the help of Babas & Fakirs (mostly black magicians & fortune tellers). Even though it is just going to be a side note but I think it is apt to share it here because that is something which actually has a connection with what is being shown in a drama. I read a few days ago how one should never give words to the negative feelings, like they shouldn’t say it out loud because the Satan is always on a look out for such a human being who is depressed, who is feeling deprived & someone who is busy in counting the things they don’t have, in stead of thanking the Creator for what they have & being satisfied. The Satan then takes those words into account & knows that this depressed soul can become a breeding ground to so much more negativity than that human being is even aware of & that is how the jealousy, hated & all these negative feelings & thoughts are nurtured. While looking at Almas, this is something that I was being constantly reminded of & could understand exactly what these words that I read a few days ago meant. In stead of praying for her inner peace, in stead of hoping for the things to get better & in stead of thanking the Creator for all the things she had, she focused more on the things Nusrat had. Almas spent her entire life in comparing what she didn’t have & how she was a victim of circumstances, that is why she turned into this bitter & negative soul who has now reached at this stage where she is literally playing with fire & isn’t even worried about the consequences that she or her family might have to face one day. 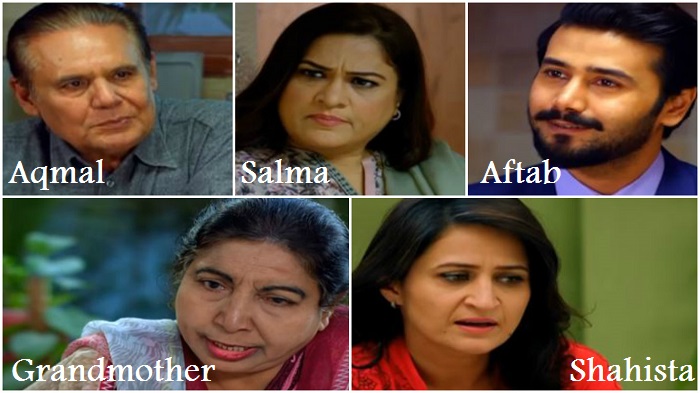 Aftab & Maham are in love with each other. It is good to see that where Maham is full of life & innocently gullible, Aftab is mature & self-sufficent. I liked how confident Aftab is that just because he loves Maham, he knows he is going to stand by her no matter what happens, that is why, before even seeking his parent’s permission, Aftab speaks to Maham’s parents & lets them know about his intention of getting married to Maham. Almas knows that her son Parvez loves Maham because their grandmother got them engaged verbally. I think more than being concerned about what Almas’s mother in law said about Maham & Parvez’s marriage, Almas is a bit too interested in the things Maham will bring with her in dowry because Almas knows that Maham is the only daughter of Shafiq & Nusrat, plus they being at a good financial position in their lives will give their daughter everything they have, so she indirectly wants her son’s life to be settled through Maham.

The main issue arises when Almas gets a heed of the fact that Aftab is interested in Maham & she decides to put forth Parvez’s proposal for Maham too but Nusrat & Shafiq refuse to accept their proposal as they know that not only Maham is interested in Aftab but Aftab is definitely a better choice than Parvez. Even though Salma, Aftab’s mother doesn’t say a word but just the thought of the fact that her son will get married to her husband’s niece doesn’t sit well with her, that is why she decides to speak to Almas & tell her that they never asked for Maham’s hand in marriage for Aftab. Also, Salma tactfully tries to manipulate her son Aftab into thinking that his father’s unpredictable mood & nature may create some obstacles in his & Mahams’s marriage, whereas it is she who is thinking on those lines & not her husband because he seems pretty happy with Aftab’s choice of Maham as his life partner.

Almas takes her fixation & obsession with Maham & Parvez’s marriage a notch higher & decides to follow some rituals prescribed by the magician she goes to & that’s when Nusrat & Shafiq start to see a lot of difference & changes, not only in their lives but also in Maham’s behavior & attitude. It was sad to see a girl like Maham, so full of life & confident acting differently, where she doesn’t feel like herself & hates the feeling of being in her home. Even though Nusrat & Shafiq believe that Maham has recovered, but they are still unaware of the fact that Almas is carrying out those deadly & dangerous rituals on a regular basis.

To add more to their woes, Shahista, the younger sister of Ateeq & Shafiq comes from London only to push Almas’s agenda a bit more because she clearly is her well-wisher. No one in Shafiq’s family has a regard or respect for Nusrat only because of the fact that Shafiq got married to her because he loved her & that is something which even Shafiq’s mother was unhappy about. The seeds of hatred & jealousy against Nusrat were planted by Shafiq’s mother & now that she is gone, everyone is reaping what was sown in their hearts against Nusrat. Even though Parvez tells his mother that he doesn’t believe in these tricks or shortcuts but just because he accompanies her & is well-aware of what his mother is upto, he is just as much responsible & just as big of a culprit as his mother is. If Parvez had wanted, he would’ve strictly told his mother to stop with what she was trying to achieve but he not only turned a blind eye but chose to facilitate her greed & evilness by staying silent.

I must say, the first 4 episodes have laid a very solid foundation of what is yet to come & I am totally hooked to this show not only because it is different, but also because it has been done tastefully & appropriately, like nothing at this stage seems overdone or unrealistic. I must say, the story of this drama is something which a lot of people will relate to because this is something that is quite prevalent in our society & it is sad but it is the truth that women fall prey to these antics before men of the families do. The direction seemed to be perfect at this stage like there were no loopholes & everything was done pretty well. I must say, all the actors have done a brilliant job but Sakina Samo takes the cake, she is so convincing as Almas & I will also add that Sara Khan not only looks gorgeous, she has also done justice to her role as Maham in terms of acting. I like the fact that the cast of this drama is unconventional, like we are seeing some very new & fresh pairings & that makes things seem a lot more interesting. Fazila Qazi was phenomenal as Nusrat too, I had a great time watching her as a concerned mother who only wishes to protect her family against all the negativity of evil eye & black magic. I liked Shafiq’s character too, like it was good to see a father who believed in giving his daughter enough freedom to choose a life partner for herself & not only that, he also decided to stand by her daughter’s decision against all odds & family pressures. I am definitely looking forward to what’s in store for us & yes, I am totally impressed. Please share your thoughts if you have given Nazr e Bad a go.