Ohkay so, this was yet another average episode of Prem Gali. Faiza Iftikhar definitely deserves credit for trying to break stereotypes in Prem Gali. She definitely has put her time & energy into handing out a few important messages through this drama but unfortunately, the execution is so boring that it becomes a task watching Prem Gali. It is sad that a drama that started off on such a high note has now fallen flat & is burdensome to watch.

Mateen, Nargis, Haseena & Salman’s track still was irrelevant. Although the writer didn’t add those scenes without a purpose but because everyone looks so caricaturish, it is hard to take them seriously. The things Mateen as well as Nargis said to Salman & Haseena about Firdous’ financial status depicted the petty mentality that people have who actually see marriage as nothing but a business deal. As much as I do appreciate the fact that Salman didn’t really pay heed to the things he heard from Mateen, but in that entire scenario, he too didn’t seem to be the right person showing off his morality because, in reality, he too falls in the same category. Salman has been jobless & probably aimless too. In their family, it was Fari who used to run a parlor to make some money, also Haseena has been running a marriage bureau to make a living, whereas Salman has only been working out to pump up those muscles. Therefore to hear Salman talk about responsibility, especially financial responsibility didn’t really make an impact. If it would’ve been Hamza, this scene definitely would’ve worked & served its purpose. So far, Salman comes across as a spoiled over-aged toddler who only knows how to whine to win what he wants. 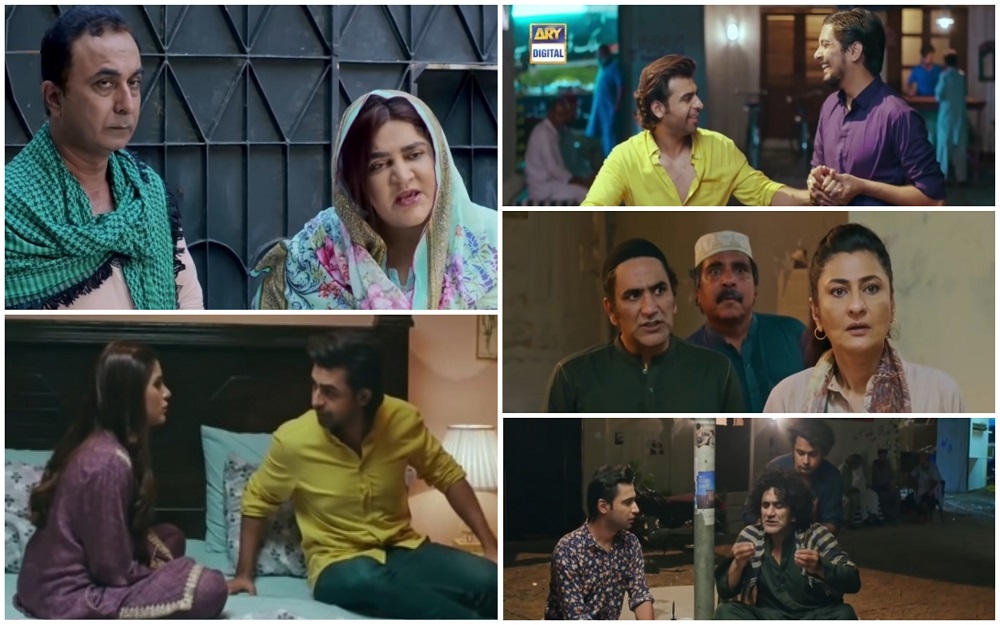 I never really imagined that I’d say this but Shireen is turning out to be such a disappointment. The way she took part in the case made against Abdul Maria & co. was so disappointing. When the drama began, Shrieen came across as the mature & wise one but with each passing episode, she is proving that she is Rahat’s daughter after all & being unreasonable is in her blood. It is also funny as well as ironic that the men she knows are only good at stirring the pot; Tau Hidayat & Mateen, she ended up believing them more than her own son-in-law who now shares a roof with her & has given her no reason to complain. In this episode, it became clear that although Shireen likes to blame Manzoor for divorcing her, I can’t help but see her paranoia being the only reason why he decided to part ways with her. It is so sad, that the strong & independent Shireen has now become a paranoid Shireen & I really don’t like her much now!

The moments Hamza shared with Sukhi & how he stood up for them was definitely the best part of this episode. Joya & Hamza’s relationship is also developing for the better but unfortunately, the preview was upsetting, rather frustrating. It is sad that of all the people, Shireen has now made up her mind that she has to question every move that Hamza makes & has to be suspicious of him all the time. No fun whatsoever!

This episode of Prem Gali was strictly alright. The preview of the next episode also was quite annoying with Hamza & Joya now fighting over who in their side of the family is a bigger psycho. It is kind of annoying that now almost every other scenario in Prem Gali now looks forced & doesn’t really do much to keep you engaged. The script definitely needed a better execution & less caricaturish characters to have that realistic appeal to it. There is something unrealistic about the way the drama has been directed, because of which it fails to leave an impact. Anyhow, Farhan Saeed and the actor playing the role of Sukhi definitely deserve a special mention for acting brilliantly. They made this episode a lot less taxing. Please share your thoughts about this episode of Prem Gali.