Tonight’s episode perhaps had one of the most predictable and done-to-death developments to its credit but since that means Sarwar is going to be really disappointed really soon, I am extremely happy with this ‘good news’. Mahjabeen’s scenes tonight were heart-wrenching, Abdullah’s confusion continued, Washma is completely focused at the moment, Mansoora has started sensing the change in her husband and Sarwar for the first time is the one who is not in control! Tonight’s episode had many powerful and emotional scenes to its credit. Yumna Zaidi and Srha Asghar stole the show completely. While Mahjabeen’s scenes made me cry, Washma’s scenes made me hopeful that Mahjabeen was not alone. The confrontations and the conversations were on point. The only aspect of this episode and the drama, in general, is the make-up; Mahjabeen’s overall look did not go well with her situation at all. She could have looked pretty without the perfectly ironed clothes and rosy cheeks and lips.

Apart from the performances, the transition from one scene to the other was really smooth. The screenplay was handled intelligently, while the entire episode focused on all the characters, the way these tracks were interchanged throughout made this episode even more engaging. Rather than focusing on a single track for too long, the director divided the time evenly and intelligently between all the tracks. Also, kudos to the director for not shooting an all-white funeral scene! I loved the direction of this and the previous episode, the only thing which stood out like a sore thumb was Mahjabeen’s make-up.

Tonight’s episode actually had many important developments which I think was great considering this was the 27th episode. For the first time, perhaps Lalla Rukh and Washma talked about Sarwar, that is how the viewers got to hear the backstory. Lalla Rukh is such a compassionate person, she took consolation in the fact that perhaps Sarwar would give Mansoora the love her brother never did. It is also easy to understand after this conversation why Mansoora is so in need of love and attention. She never got it when she was married to her husband therefore it was easy for Sarwar to lure her into his trap. 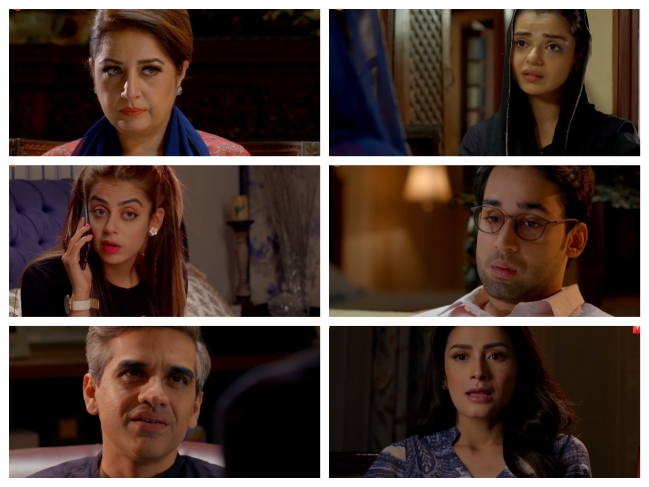 The confrontation between Washma and Sarwar was another insightful scene in this episode. Washma talked about Sarwar’s “gandi nazrein” perhaps that is why she hated this man so much. She always knew that he was greedy but she could definitely sense something more than that. It is interesting how Sarwar never has much to say in his defense when Washma confronts him. Whenever Mansoora confronts him, he stands his ground and is convincing but with Washma he feels frustrated and angry yet he never tries to intimidate her. It would be safe to say that Washma is the only person he knows he cannot fool. He had tears in his eyes when she left because this sick man literally sees himself as the victim!

Sarwar is so convinced that there is nothing wrong with what he wants. On the contrary, he feels that everyone who stands in his way is wrong in doing so. His dialogues in the previous episode and his reactions in this episode clearly showed that he looks at his ‘love’ for Mahjabeen from a completely different angle. In his own mind, he is the victim, someone who for the first time has actually fallen in love and has been so unfortunate that his good-for-nothing step-son got married to that girl.

Abdullah is sick and tired of the Barbie (Shanzay) since he has not been answering her calls. At the same time, he knows that he cannot get out of this marriage arrangement without some serious help from Washma perhaps. It is sad that these two are not even talking to each other anymore.

The scene that was shown in the preview was missing from this episode. In fact, Mansoora felt lonely and not loved therefore she questioned Sarwar. While Sarwar is busy planning his next move, Mansoora is thinking about all those things which different people have said to her at different times. She also asked Abdullah not to divorce Mahjabeen unlike before when she was pushing him to do what Sarwar wanted him to. Mansoora and Abdullah’s conversation was beautifully written and one of the many meaningful conversations in this episode. For once Mansoora gave her son the right advice and through this conversation, the viewers got to know what was going on in Abdullah’s mind. Mansoora actually listened to Washma this time around since Washma told her clearly that divorcing Mahjabeen would make it easier for Sarwar to get what he wants.

It seems like Mansoora will eventually ‘get over’ Sarwar. Once he finds out that Mahjabeen is pregnant and Abdullah lied about the divorce, he will not be able to contain himself. Omair Rana yet again acted brilliantly in this episode.

All of Mahjabeen’s scenes tonight were extremely emotional. She loves Abdullah and begged him once again not to leave her. Her conversation with Sarwar showed just how innocent she is. The most emotional scene was the one in the graveyard. I wish she would have taken Sarwar’s name at that time. Somehow she is scared of taking his name. Now that she is pregnant, Abdullah has no reason to be ‘confused’. 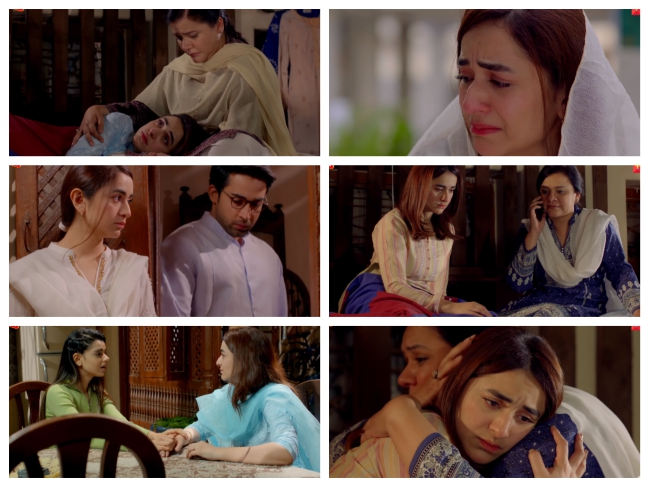 Mahjabeen’s scenes with her mother were also some of the best one’s tonight. The way her mother protected her and tried to give her the confidence she needed was endearing.

Tonight’s episode was engaging and poignant. I hope that all the tracks are wrapped up gradually in the upcoming episodes and we don’t see everything falling in place at the last minute! Abdullah needs to make up his mind, his character needs some much-needed change. Unless he learns to make his own decisions, there will always be someone or the other ‘confusing’ him. There is so much that Sarwar has done wrong therefore we should start seeing how Mansoora finds out about everything starting from the business hopefully soon!

Did you watch the latest episode of Pyar Ke Sadqay? Share your thoughts about it.