Sammi has gradually won me over completely and I find myself talking (raving) about this play every time I have a discussion with anyone at all about Pakistani dramas. There are many reasons why Sammi holds a special place in my heart but the most important reason is that this drama focuses entirely on the issues which it aims to highlight, there isn’t a single track in the story which is there for “commercial reasons”, there is no forced love story and most importantly even without glamour this drama manages to make you look forward to it every single week. Sammi proves that a well thought out script which is executed skillfully will engage and educate the viewers even if there is no glamour involved. Although we have seen many of the actors in this drama serial playing a lot of different roles in their career but some of these actors are being seen in the most unusual and challenging roles of their career. Adnan Siddiqui is one such actor who is very often seen playing roles different from that of Rashid yet he nailed every single expression especially in tonight’s episode and I have to say that for me he was the star of the show tonight. I love the way the writer is showing the gradual development in his character, the reasons behind this change are also very convincing and logical. Madiha Rizvi is another actress who is more often seen playing important supporting roles but she always gives every role her best and this time around too she has done complete justice to her character. Even the child actor playing the chota chaudhry impresses you with his acting every time. 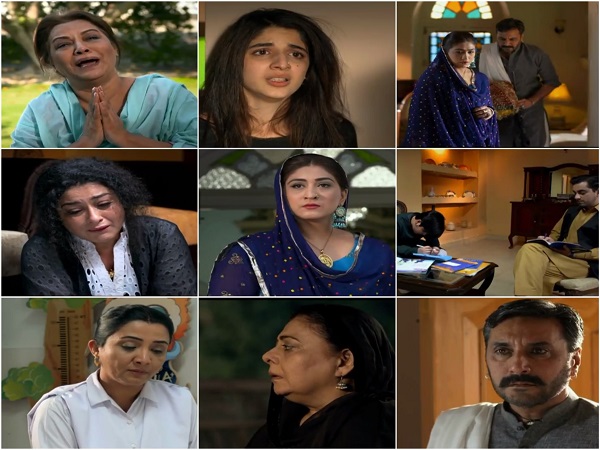 Like every other episode of Sammi, this one too covered all the tracks in the story flawlessly. I really appreciate the fact that Sammi’s content has substance and there is substantial development in every episode. Sammi’s mother’s conscience did not allow her to let Waqas kill her. This went to show that while she was okay with giving Sammi away as vanni, she could not see her getting killed like that. Zarina also for the first time questioned the way her son was being treated and decided to draw a line! The way she looked at Salima suggested that whatever she was planning involved Salima as well, I am waiting to find out what her plan is. Gradually all these people who have slave mentality are questioning the way things are whether it is Rashid, Zarina or even Sammi’s mother.

Rehan Sheikh was absolutely remarkable as the Chaudhry who cannot get enough of belittling people and torturing them mentally. His character is etched-out flawlessly and he has owned it completely right from the get go. His dialogues clearly highlight the mentality of all such people who think they own other human beings and are so convinced that they are invincible. Although Chaudhrani is seen giving other people lectures on morality, the truth is that she is just as selfish as the Chaudhry. She is always looking out for her own interests and although a strong woman like her could do a lot more with all her wisdom especially because she knows the difference between right and wrong she is another person who is part of this system. I am waiting to see if her character will also go in a different direction in the upcoming episodes. Right now she is trying to instigate Rashid to kill Chaudhry.

Naheed’s track took another interesting and meaningful turn with this episode. I particularly liked her conversation with the doctor because it also had a strong message. The part about announcing the nikkah and keeping the copy of the nikkah nama was once again a message which was put forward in a subtle yet impactful manner.

Chandni’s scene was intense, now that she is all alone and she knows she is partially responsible for her son’s death, will she help Sammi in some way in the future or is this going to be the end of her track? I am waiting to find out.

Although this entire episode was intense and impactful but the last scene was the best! Loved the way it was directed and Adnan Siddiqui’s expressions were faultless. The preview of the next episode suggested that there might be hope for Sammi after all. Can’t wait to find out what happens next!