This episode was extremely disturbing not only because Ayesha’s life has taken a turn for the worst but also because of how smooth everything has been for Shahwez so far and how much difficulty Ayesha had to face at every step. Yes, he feels guilty but is that really enough? I fail to relate to his guilt and cannot see past the man who did not think twice before violating a woman in the worst way possible. Salma’s reaction after learning the ugly truth definitely gave me even more of a reason to question why we see women like her on screen. Girls do get infatuated with men but to ‘stand by’ someone’s side like this even after knowing that he raped someone goes to show that Salma is just plain desperate! Salma really doesn’t care what kind of a person Shahwez is but she only wants to believe in the image she has of him. Nothing that he says or does can change that!!

Adnan was not as ‘understanding’ as Salma, he made it look like everything was all about him. I understand why Adnan would be upset; he just found out that his wife was raped and his daughter isn’t really his. But why does he fail to see that his wife is the victim here too? Just like everyone else in Ayesha’s life he did not see things from her perspective. I really did not want the story to take such an ugly turn but now that it has, I have a bad feeling that Adnan and Ayesha’s relationship will never be the same again. 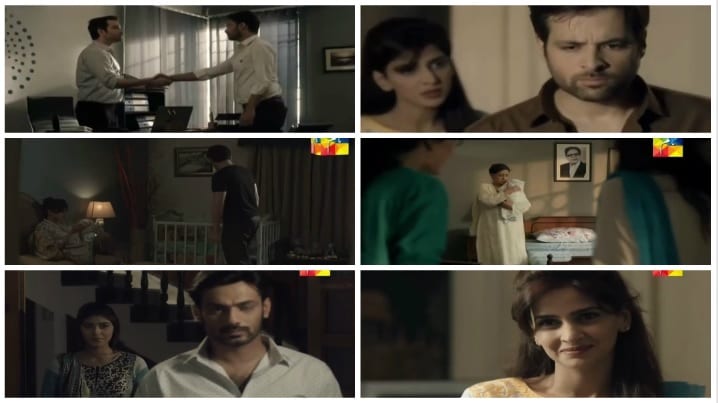 The scene between Ayesha and her mother in law had to be my favorite scene from this entire episode. I must say that the way this relationship has been shown on screen is absolutely brilliant. This mother in law is not perfect but she is definitely a bigger support for Ayesha in many ways than her mother has ever been. At a time when she was willing to do anything to make things alright for Sangat sadly there is no way for Sangat to get that treatment unless Ayesha turns to Shahwez! Which is going to be another ugly twist in the story! I hope that we don’t see Shahwez laying down his life for his daughter, that would be the worst turn possible in the story!

It is actually painful to watch Ayesha’s mother worrying sick about Shahwez. The amount of screen time dedicated to her concern for Shahwez seemed quite useless. We all know by now just how close she is to Shahwez and how much he means to her therefore wasting more than ten minutes on a completely useless conversation was something that could’ve been easily avoided. I wish this mother had the same kind of concern for her daughter as well. Well! one thing we know for sure now, she might be a professor but she is not a good judge of character. Even with all his remorse and guilt Shahwez is not a good man but somehow she fails to see that. And even with her tough exterior her daughter is a very vulnerable woman, which is also something she has been unable to see.

I am hugely disappointed with Adnan’s reaction but not at all surprised and a part of me is still hoping that even after knowing the truth it won’t be easy for him to fall out of love with his wife or Sangat – which of course is a lot of wishful thinking! I would also have liked to see Salma walking out on Shahwez, it is distressing to see that he has so much support and Ayesha has none! Salma’s sympathies should also have been directed towards Ayesha and not Shahwez! I am wondering if Ayesha’s mother will ever find out the truth about Shahwez and at this point I am also wondering if she will be as ‘understanding’ even then as she is right now!! Now that Adnan knows the truth too, there is nothing holding Ayesha back – she should tell her mother the truth.

The preview of the next episode suggested that Adnan will stay the same and Ayesha might have to ask Shahwez for his ‘help’ yet again! I am definitely not looking forward to that and hoping that Ayesha will be able to help her daughter herself and now that she has the opportunity to do so, she will bring her rapist to justice since he is so keen to be punished! I must say brilliant acting by all the actors yet again, they never give me anything to complain about.